First, let's get a sense why this should be true. The density of a Beta$(1,n)$ variable which has been multiplied by $n$ should be proportional to

(for large $n$, anyway), so it surely looks exponential.

A rigorous and relatively elementary way to demonstrate the result is to work with the distribution function (CDF) $F_n$. That is, suppose $Y_n$ has a Beta$(1,n)$ distribution (for $n \gt 0$) and let $X_n=nY_n$. By definition,

When $0 \lt x \lt n$, this probability is given by the Beta integral, proportional to

(Notice how freely we may drop any multiplicative constants, like that factor of $1/n$, that do not depend on $y$ or $x$: in the end we only need to establish that the limiting function rises from $0$ to a finite value in the limit as $x\to\infty$. The function then can be divided by that limiting value to produce a genuine distribution.)

The normalizing constant turns out to be unity, because the limiting value of $1 - e^{-x}$ as $x\to\infty$ is $1$: it already is a valid distribution function.

It might be worthwhile to show what can go wrong with an analysis of densities (PDFs). 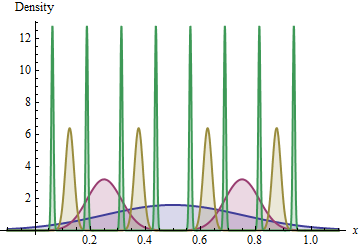 The uniform $n$-distribution has $2^{n-1}$ spikes and those spikes are occupying exponentially narrower portions of the gaps between their peaks. Because this is a finite mixture of Normal distributions it has a very nice density which is bounded, nonzero, and infinitely differentiable everywhere--one could scarcely complain of any mathematical "pathology." However, this family has been constructed to ensure that the limit of these densities is almost everywhere zero. (This is not hard to prove, but the details might be distracting here, so I will rely on the figure to make the point.) Note that zero itself is a nice function, too: bounded and infinitely differentiable. It's just impossible to normalize it to unit area! 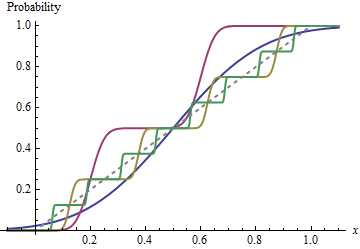 The limit is a uniform distribution because between any $0 \le a \lt b \le 1$ there are approximately $(b-a)2^{n-1}$ spikes, each with almost all its probability (totaling $2^{1-n}$) concentrated between $a$ and $b$, for a total probability close to $b-a$: that is nearly uniform. In the picture you see a sequence of staircase-like graphs with smaller and smaller steps squeezing down to the slanted ramp (gray dots): that's the Uniform$(0,1)$ CDF.

The problem isn't restricted to densities that converge to $0$. Pick $0 \lt p\lt 1$ and let $(X_n)$ be a sequence of random variables with distributions that are a mixture of $p$ times any absolutely continuous distribution $F$ you want and $1-p$ times the uniform $n$-distributions. This sequence of densities converges to $p$ times the density of $F$. Although that is a nonzero function, it's not a valid density because it integrates to $p$, not to $1$.

Thanks to the comments I can now formulate the answer myself, I think:

We know that Y=nX, so we can use a general formula for the pdf of a transformed variable (link of Christoph Hanck):

Not the answer you're looking for? Browse other questions tagged asymptotics beta-distribution exponential-distribution or ask your own question.

7
If $X_n \sim \text{Beta}(n, n)$ Show that $[X_n - \text{E}(X_n)]/\sqrt{\text{Var}(X_n)} \stackrel{D}{\longrightarrow} N(0,1)$
7
The relationship between cumulative distribution vs cumulative density vs probability density
0
Presenting the convergence of a set of distributions to a particular distribution graphically