What is a strict definition of U-shaped relationship?

I now have seen several papers that analyze U-shaped or inverse U-shaped relations among variables (in a regression framework). The general understanding I have from there is that it is a specific type of a non-linear relationship that we can all easily visualize.

However, I am a bit confused about how exactly people mathematically define U-shaped regression functions. Suppose for simplicity there is only regressor $x$.

Or does it simply mean that the regression function is decreasing in $x$ up to some point $c$ and then after $c$ is increasing in $x$?

The short answer to your question (as stated elsewhere) is that there is no single mathematical definition of a U-shape. The comment by @whuber is the best general definition that I have seen.

I do research on tests of U-shapes and for my presentation I have a slide with the title "What does a U mean to you?", meaning that it is subjective what people mean by the term "U-shape". The most important thing is that when you use the term "U-shape", you define exactly what you mean by it, without assuming that others will know what you mean.

Since you specified the case of only one regressor, I'll focus on that. I've seen the following definitions used in various articles:

One complication that comes up is what if the turning point is close to the ends of the range of the x variable? Should we still consider such a function a U-shape? In my opinion, such a discussion should be had when you define what a U-shape means to you for your application, and when you specify your null hypothesis.

The definition I use in my paper, Non-Parametric Testing of U-Shaped Relationships, is the following:

Let $m(x)$ be the regression function and let $S\left(X\right)$ be the support of $X$. For a specified set $A_{0}\subset S\left(X\right)$, we are interested in testing the following:

For example, in an application I test for a U-shape of life satisfaction in age from age 20 to 70, where the turning point is between ages 30 and 60. Arbitrary decisions are necessary with this proposed framework. The important thing is to be open about them and check how sensitive results are to changes (and to challenge others to do the same).

In addition to stating the null hypothesis, as always you should state the assumptions you rely on. For example, a common assumption is that the regression function is either U-shaped on monotone. See, for example, Lind and Mehlum's 2009 "With or Without U? The Appropriate Test for a U-Shaped Relationship", where they propose an improvement on the vanilla OLS quadratic test by testing that the derivative of a specified functional form is negative at the beginning of the range, and positive at the end.

An additional point to consider is: Do you want a test that rejects the null hypothesis because of a small violation of U-shapedness? If yes, consider the R package qmutest, which implements a non-parametric tests based on splines of the null hypotheses that the regression function is quasi-convex, and separately that it is monotone. If you do not want a test that gives inference against a U-shape because of a small violation, Uri's two lines test might be best if you want to test that a regression function is mostly decreasing and then mostly increasing.

Since your question was about the use of the term "U-shape" and the definition, I find it relevant to list some terms here that are used often to refer to the same thing that "U-shape" and "inverted U-shape" are used to refer to: "valley-shaped", "trough-shaped", "hill-shaped", "unimodal", "single-peaked", and "bell-shaped". There is no inherent reason why "U-shape" is a better term than the others, but its use seems to have caught on.

I'm working on a general R package that will just be an interface to specific R packages (such as qmutest) that test for U-shaped relationships however they choose to define them. The goal will be to help users compare different tests and to think hard about the exact null hypothesis they want to test, and which assumptions they are prepared to make.

"U-shaped relationship" is not a mathematically precise term and there is no universally accepted definition. It usually means that the relationship is first decreasing and then increasing, or vice versa.

In other words, it means that the relationship is not monotonic (non-monotonic), but instead has exactly one extremum (maximum or minimum). In computer science this is sometimes called "bitonic".

Uri Simonsohn has recently written an interesting paper about testing U-shaped relationships. See his preprint Two-Lines: A Valid Alternative to the Invalid Testing of U-Shaped Relationships with Quadratic Regressions which is very readable and amusing. Here is how the paper starts:

Is there such thing as too many options, virtues, or examples in an opening sentence? Researchers are often interested in these types of questions, in assessing if the effect of $x$ on $y$ is positive for low values of $x$, but negative for high values of $x$. For ease of exposition, I refer to all such relationships as 'u-shaped,' whether they are symmetric or not (i.e., U or J shaped), and whether the effect of $x$ on $y$ goes from negative to positive or vice versa (i.e., U or inverted-U).

This supports the definition I gave above.

Here is the key figure: 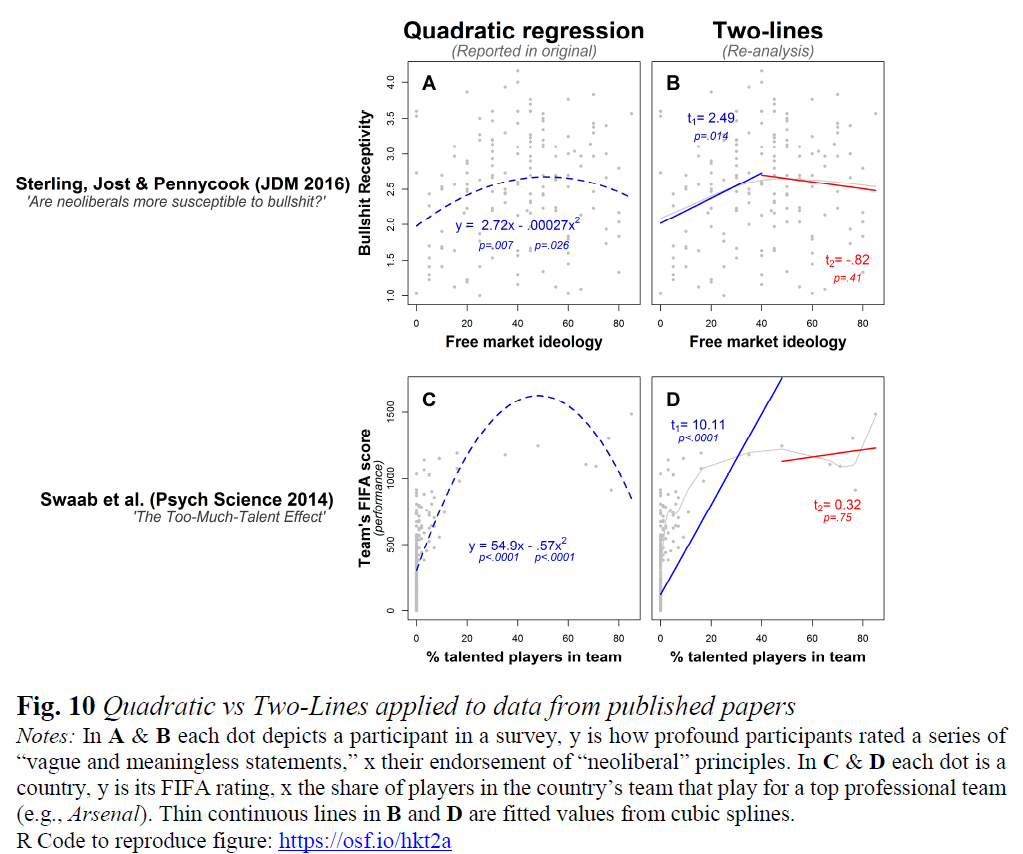 Update: There is some criticism of Uri's paper in the comments. I would like to stress that he never suggests that discontinuous two-line fits are supposed to model the data well (or that the jump at the discontinuity has some physical meaning). No. This fit is used for the sole purpose of providing a statistical test of U-shape-ness.

Of course I agree with @FrankHarrell that it makes much more sense to use a spline model to fit such nonlinear relationships. But splines do not provide a test of U-shape-ness, whereas Uri's two-line fit does.

Not the answer you're looking for? Browse other questions tagged regression references terminology nonlinear-regression definition or ask your own question.

51
How are propensity scores different from adding covariates in a regression, and when are they preferred to the latter?
3
How does one build/find a mathematical model for a convex relationship?
2
Statistical error in Bayesian framework
4
Gaussian Process Regression for piecewise linear response functions
39
Variance of $K$-fold cross-validation estimates as $f(K)$: what is the role of "stability"?
1
Outside of linear regression, what does it mean to say that the residuals should be independent?