Possible to use moment generating function of standard normal to find variance of noncentral $\chi^{2}$?

In a homework problem, I have been asked to find the variance of the noncentral $\chi_{n,\delta}^{2}$ distribution with degrees of freedom $n$ and noncentral parameter $\delta >0$ by using the moment generating function of the standard normal distribution.

The difficulty I am having here is that it does not seem possible to do this.

Yet I can use the moment generating function of the normal distribution $N(\mu_{i},1)$ where some of the $\mu_{i} \neq 0$ to help me find the variance, right?

Here's an inelegant but straightforward, elementary solution. It begins with the case $n=1$.

We can read these expectations directly off the moment generating function for $X+\mu$, which is

as demonstrated at https://stats.stackexchange.com/a/176814/919, for instance. The Maclaurin series for $\psi$ is

The numerators of the fractions are the corresponding moments, whence

The hard part has been done, because the general case $n\ge 1$ reduces to this one.

The underlying geometric idea is that we can rotate the coordinate system so that the first coordinate is parallel to the vector of means $(\mu_1,\mu_2,\ldots,\mu_n)$ and the other coordinates are orthogonal to it. Because a rotation is a linear transformation, the coordinates continue to have a jointly multinormal distribution. Because rotations are orthogonal, the new variables continue to have unit variances. All the "noncentrality," however, has been located in the first coordinate alone because the remaining variables are standard Normal (their means are all zero). 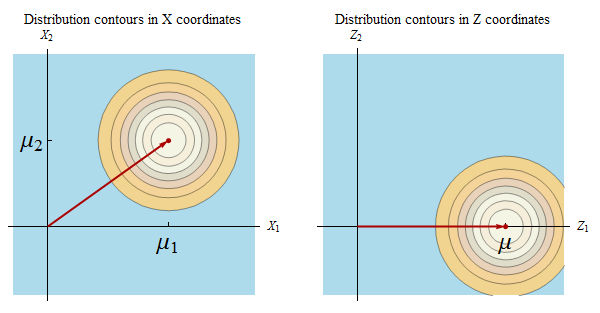 The $Z_i$ are linear combinations of independent standard Normal variables. Their means therefore are $0$ and their variances are the sum of squares of the coefficients, both of which are

Moreover, a similar calculation shows the $Z_i$ are uncorrelated. Since they are jointly Normal, they must be independent. Accordingly,

Our previous formula $(1)$ applies directly to both terms (the noncentrality parameter in the second term is $0$), giving

The formula for general $n$ works out the same way (use induction or apply linear algebra), giving the general formula

Can you use the expected value or covariance formula instead to derive the variance? Mgf should also work but you’re taking second derivative of the mgf so I’d try to work backwards first instead?

Not the answer you're looking for? Browse other questions tagged self-study normal-distribution moments chi-squared-distribution non-central or ask your own question.

14
How to calculate the expected value of a standard normal distribution?