I was following the backpropagation tutorial by Michael Nielsen on http://neuralnetworksanddeeplearning.com/chap2.html, one of the very few places where the backprop algorithm is nicely explained both in theory and practice with an actual implementation in python.

Now, something is not clear when he explains how to calculate the error on a specific layer in terms of error in the next layer (I will provide a screenshot because I don't want to mess with notation): 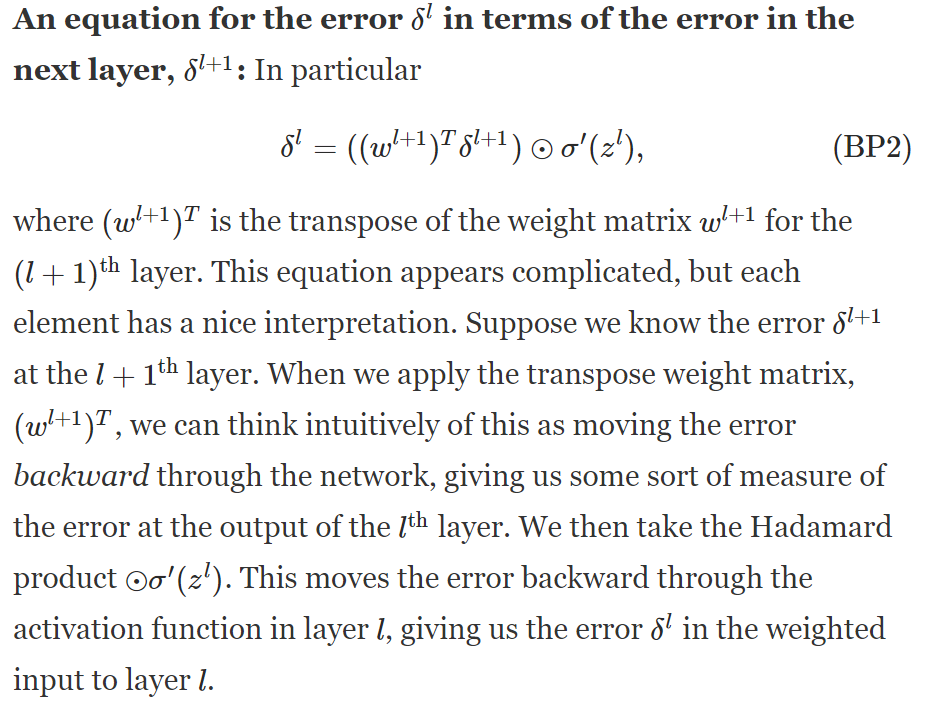 Here, delta^l is the error in layer l, the circled dot is the elementwise product betweeen vectors, w is a weight matrix, and sigma primed indicates the derivative of an activation function.

Now, observe he points out that by applying the transpose operator to the next-layer-error vector (which is the previous layer during backprop), one is "sending back" the error across the network, and then, multiplying by the derivative of sigma, one applies the chain rule which completes the backprop step.

I have troubles understanding what does he really mean by saying that the traspose operator "sends back". Perhaps he wants to apply the inverse trasformation? But unless the matrix happens to be orthogonal, which is not the case AFAIK, the transpose does NOT equal the inverse.. In any case, I would have thought of applying some kind of differential operator to matrix w, and not the transpose one.

NOTE: Please let me know whether this post is correctly suited for stackoverflow, or should it be posted on stats or math stackexchange.

"When we apply the transpose weight matrix, $(w^{l+1})^T$, we can think intuitively of this as moving the error backward through the network"

The reason for doing the transpose is simply to make the dimensions work out, that matrix needs to be transposed in order to guarantee that multiplying it with the error vector afterwards results in the correct dimensionality.

The reason why this application (~= multiplication) with the transposed weight matrix can be understood as moving the error backward through the network is kind of exactly the same intuition you probably already have for the forwards pass. In the forwards pass, a high/strong weight means a node in one layer has a large influence on the connected node in the next layer. Exactly the same intuition holds here for the backwards pass, because, just like in the forwards pass, we're multiplying something with a weight. In the forwards pass, that something is the activation level of a node in the previous layer. In the backwards pass, that something is the error observed in a node in the later layer. If a particular connection is ''strong'' (weight has a high value), and we also have a large error, we should put a large amount of ''blame'' for the error on that large weight. This is what we get by multiplying by the (transposed) weight matrix; large weights take a large portion of the ''blame'' for large errors.

Let's consider the forwards pass, following the notation from your link. For simplicity, let's ignore activation functions and biases for now, they're not really important for our intuition. Then, equation 25 in your link tells us that the activation vector $a^l$ of layer $l$ is defined as $a^l = w^l * a^{l-1}$. To make the notation a bit more consistent with the equation for the backwards pass, we'll rewrite this as $a^{l+1} = w^{l+1} * a^l$ (simply added $1$ to all layer indices).

$w^{l+1}$ is a matrix, and the $a$ things are vectors, so it's convenient to consider again what the matrix-vector multiplication looks like. Take a look at the image near the top here for example: http://mathinsight.org/matrix_vector_multiplication , copied at the bottom of this answer.

Now suppose we have a vector $\delta^{l+1}$ of errors in layer $l+1$. Let's again consider only the top node of this layer. The activation level of this particular node was determined by the top row of the weight matrix $w^{l+1}$, and the entire vector of activation levels $a^l$. We'll want to "punish" each of the weights in that top row proportional to the magnitude of that weight and our error. So, to do that, we'll want some kind of multiplication between $w^{l+1}$ and $\delta^{l+1}$ (note that this is different from the forwards pass, in which we had a multiplication between the same weight matrix, but an activation vector from a different layer). This should again result in a vector with the same shape as $a^l$ (this is already one clue that we have to do the transpose, otherwise the shape simply won't be correct).

To figure out how this multiplication should look exactly, we'll have to investigate which weights exactly are to blame for which errors. The top row of weights in the matrix $w^{l+1}$ had (during the forwards pass) influence on only the top element of $a^{l+1}$, and is therefore now only to blame for the top element of the error vector $\delta^{l+1}$ and that entire top row of weights should therefore now also only be multiplied by the top element of $\delta^{l+1}$ in order to compute a part of $\delta^l$. In the notation of the image near the top of that page I linked, this means that we would like our top row of weights to be only multiplied $x_1$. But that's not what the picture of matrix-vector multiplication says, that picture says that elements of the top row of the matrix are multiplied with all $x$. If you look carefully, there is a vector in that matrix which is solely multiplied by the top element $x_1$ though, which is the very first column of the (weight matrix). By transposing the weight matrix, we interchange rows and columns, and we essentially get exactly the multiplications we desire.

22
Backpropagation algorithm and error in hidden layer
5
backpropagation - bias nodes and error
0
The derivation of $\delta_j = \frac{\partial E_n}{ \partial a_j}$ errors for hidden units in back propagation for neural networks with the chain rule
3
Softmax in multi-class in deep NNs
2
In Nielsen's explanation of backpropagation, why does the way he defines error change? Is it actually a change?
13
Matrix form of backpropagation with batch normalization
3
How exactly is the error backpropagated in backpropagation?