Distribution that has a range from 0 to 1 and with peak between them?

where I give a number (0.2, 0.5 and 0.9 in the examples) for where the peak should be and a standard deviation (sigma) that makes the function wider or less wide.

One possible choice is the beta distribution, but re-parametrized in terms of mean $\mu$ and precision $\phi$, that is, "for fixed $\mu$, the larger the value of $\phi$, the smaller the variance of $y$" (see Ferrari, and Cribari-Neto, 2004). The probability density function is constructed by replacing the standard parameters of beta distribution with $\alpha = \phi\mu$ and $\beta = \phi(1-\mu)$

Alternatively, you can calculate appropriate $\alpha$ and $\beta$ parameters that would lead to beta distribution with pre-defined mean and variance. However, notice that there are restrictions on possible values of variance that are valid for beta distribution. For me personally, the parametrization using precision is more intuitive (think of $x\,/\,\phi$ proportions in binomially distributed $X$, with sample size $\phi$ and the probability of success $\mu$).

Kumaraswamy distribution is another bounded continuous distribution, but it would be harder to re-parametrize like above.

As others have noticed, it is not normal since normal distribution has the $(-\infty, \infty)$ support, so at best you could use the truncated normal as an approximation.

I transform to create this kind of variable. Start with a random variable, x, which has support on the whole real line (like normal), and then transform it to make a new random variable $y=\frac{exp(x)}{1+exp(x)}$. Presto, you have a random variable distributed on the unit interval. Since this particular transformation is increasing, you can move the mean/median/mode of y around by moving the mean/median/mode of x around. Want to make $y$ more dispersed (in terms of inter-quartile range, say)? Just make $x$ more dispersed.

There is nothing special about the function $\frac{exp(x)}{1+exp(x)}$. Any cumulative distribution function works to produce a new random variable defined on the unit interval.

So, any random variable transformed by plugging it into any cdf ($y=F(x)$) does what you want---makes an r.v. distributed on the unit interval whose properties you can conveniently adjust by adjusting the parameters of the untransformed random variable in an intuitive way. As long as $F()$ is strictly monotonic, the transformed variable will, in several ways, look like the untransformed one. For example, you want $y$ to be a unimodal random variable on the unit interval. As long as $F()$ is strictly increasing and $x$ is unimodal, you get that. Increasing the median/mean/mode of $x$ increases the median/mean/mode of $y$. Increasing the interquartile range of $x$ (by moving the 25th percentile down and the 75th percentile up) increases the interquartile range of $y$. Strict monotonicity is a nice thing.

I know the solution is not as beautiful as using one distribution but this was the way I was able to solve my problem:

result when executing this code is shown in the picture below: 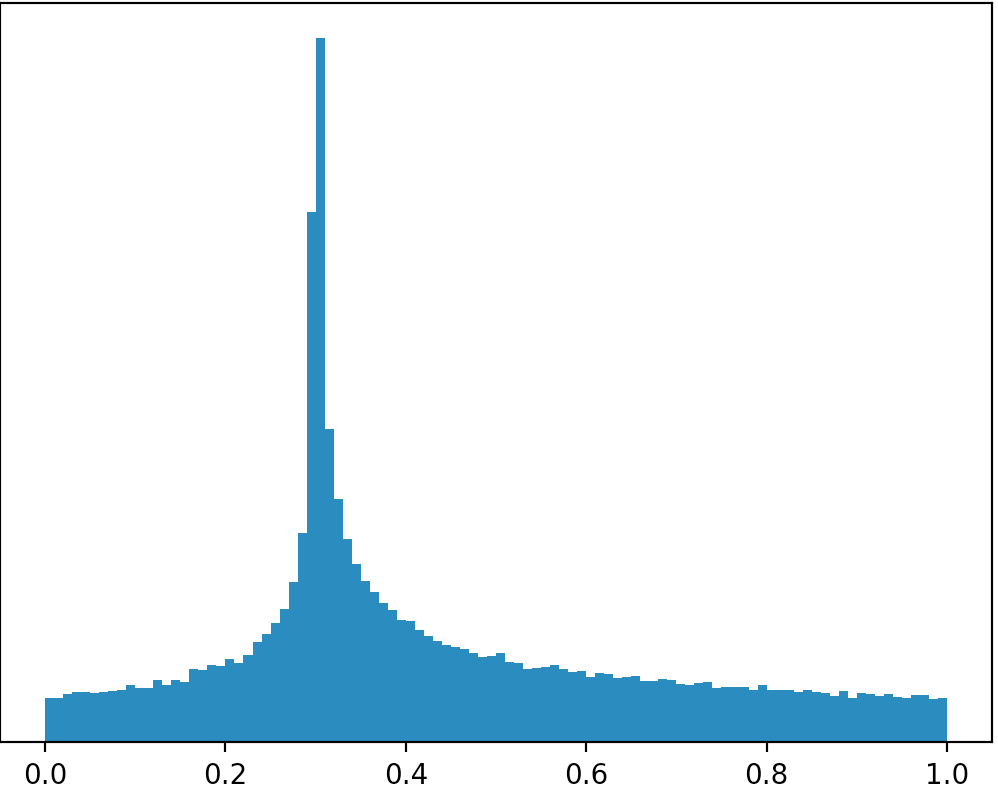 You might want to take a look at 'Johnson curves'. See N.L. Johnson: Systems of Frequency Curves generated by methods of translation. 1949 Biometrika Volume 36 pp 149-176. R has support for fitting them to arbitrary curves. In particular his SB (bounded) curves might be useful.

It's 40 years since I used them, but they were very useful to me at the time, and I think they will work for you.

This answer is for you if you do not know what your mean/maximum will be and you want your program to be able to handle any mean and freely set variance.

Disclaimer: I am not a Mathematician, my answer works but the explanations might be incomplete/incorrect and not mathematically specific.

All of the comments and answers above about using the beta distribution reparametrized for standard variation and mean do not work as if you set a fixed variance you'll run into trouble because beta and alpha can become less than one, which creates bimodal distributions. Thus, I came up with this.

You can use the beta distribution and by setting alpha (or beta when mean > 0.5) to a number above 1 to ensure that the distribution stays unimodal, and then calculating beta (or alpha when mean > 0.5) from the mean and alpha (or beta). However, maximum, mean and median will not be the same. While the maximum as you indicated will be at e.g. 0.9 the mean will not be at 0.9 instead it will be slightly lower. You can also set the mean to 0.9 but then the maximum will be slightly higher(see graphs at the bottom with mean = 0.8). How much higher/lower it will be depends on how high you set alpha (or beta). However, the variance is limited for means/modes that are very close to 0 or 1 e.g. if you set the mean to 0.9999 it you cannot set a variance that will likely return numbers like 0.9 as it cannot take that many numbers above 0.9999 (see last graph). Basically the maximum variance will be tied to how close the the mean is to 0 or 1.

If you want to select a certain variance you could for example calibrate it once by setting alpha and beta from mean (0.5) and variance (see here: https://stats.stackexchange.com/a/12239/305461). And then just set the "narrowness" in my code to whatever alpha/beta became.

To calculate this I took the formula for calculating mean and solving for alpha and beta respectively from wikipedia page on beta distributions: en.wikipedia.org/wiki/Beta_distribution 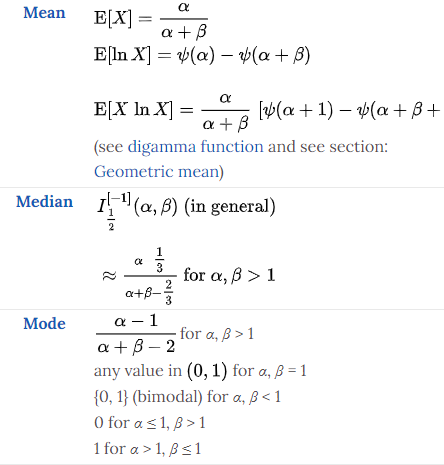 To set the mode (maximum) I found out it works by just adding 1 to each alpha and beta, after having calculated it with mean. You can probably also do it more elegantly by solving for alpha and beta with the equation for the mode. 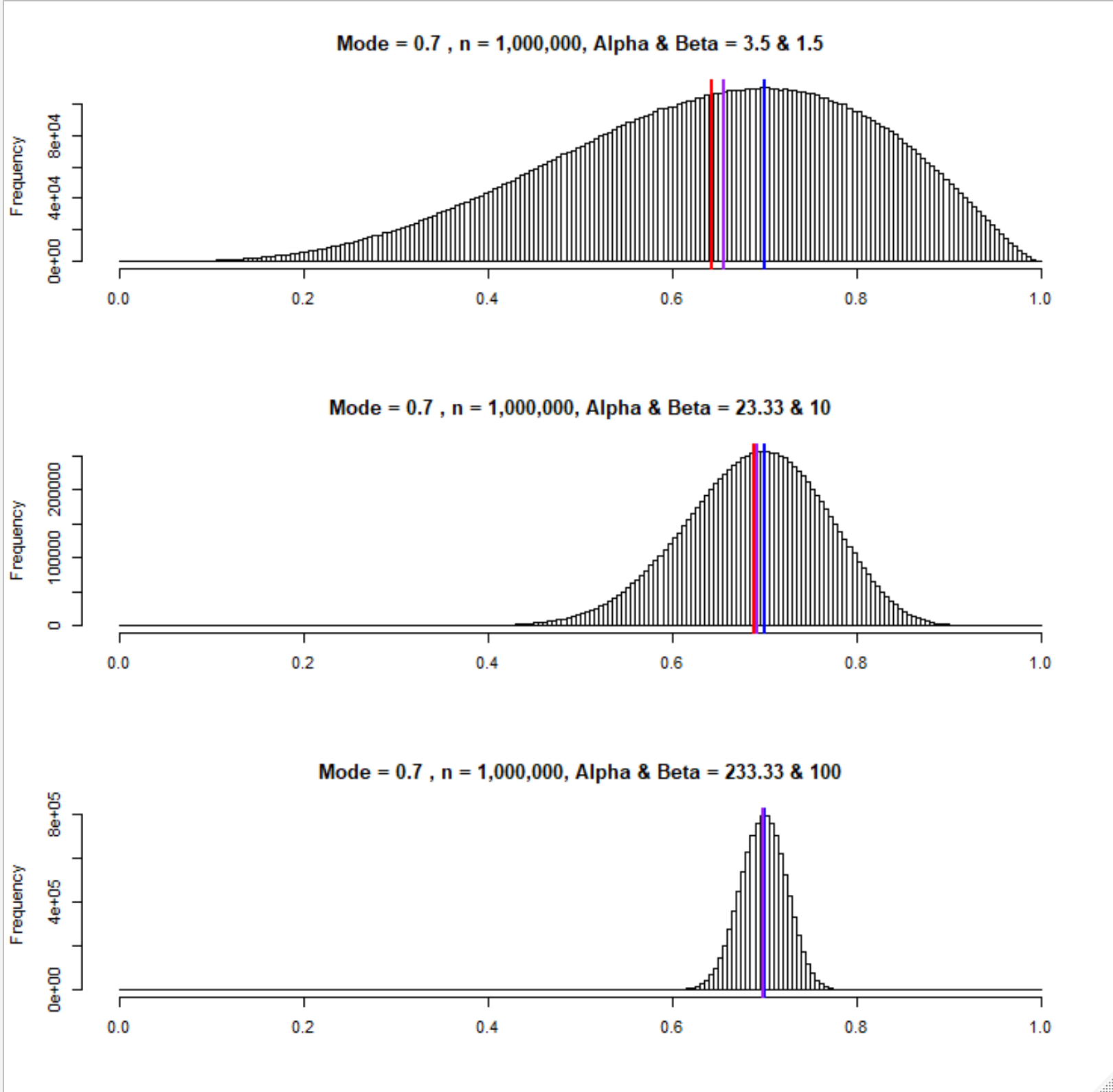 Mean (red), median (purple) mode/maximum (blue) (left to right). This is how the distribution looks with a set maximum (mode), however mean and median are both lower. As Beta is set to higher numbers the variance will be lower and the more it will look like a symmetrical normal distribution (truncated), this will also mean that mean, median and mode will be closer. 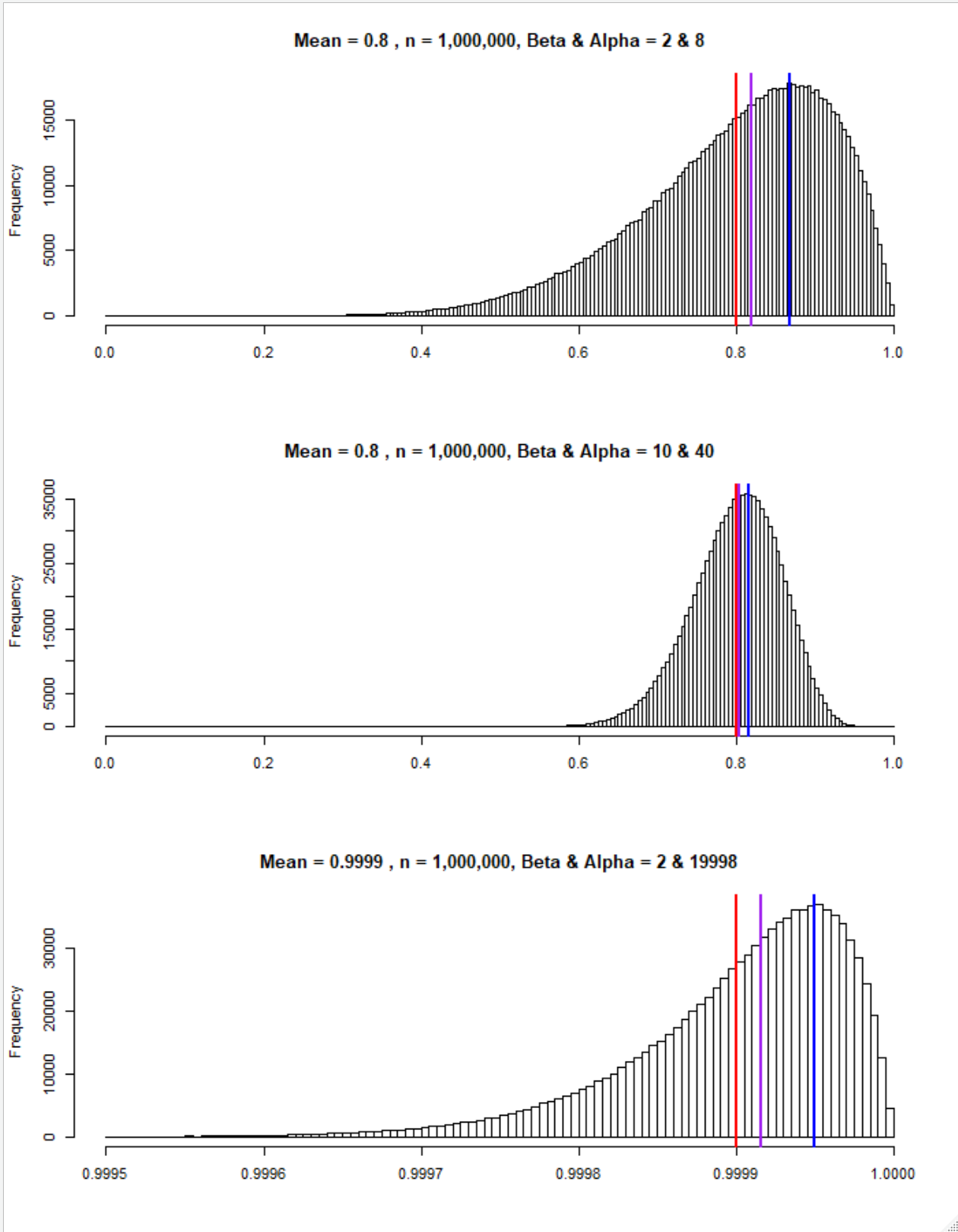 Mean (red), median (purple) mode/maximum (blue). Median and mode are higher than the mean. Because someone on one of answers thought this couldn't work; I added the last plot to showcase that this works for any mean. It works as long as alpha and beta are above 1. As alpha is always higher than the set beta there are no weird edge cases.

Since I wanted to draw from a distribution where Mode and Mean are the same I asked another question which you can find here: Random number (between 0 & 1; > 5 decimal places) from binomial/beta-like distribution, with set mean (same as mode & median) and set variance

Code for Beta Distribution (in R):