lets' say I have the voting record of Republicans (1) and Democrats (2) on gun legislation. This is the information given

But what does it mean in regards to the association when we have a situation that is "lesser"?

The Fisher exact test conditions on the margins (they don't have to be fixed, necessarily; Fisher would argue that the margins are almost ancillary, though in some situations this argument might be a bit harder to maintain). The row and columns margins are both (4,4). The possible tables with those margins are:

If there's no association, the distribution of any given cell (say the top left cell) is hypergeometric. The probabilities associated with each table (under the null hypothesis) are:

where the first row is the top left cell of the table and the second row are the probabilities.

One tailed tests either look at the left end or the right end of this distribution; a two tailed test looks at both ends.

While Fisher typically didn't give explicit alternatives and might not have made a one-tailed distinction in this situation, meaning that he might perhaps just have looked at all tables with equal-or-lower probability ($p=\frac12$ in this instance), we can quite reasonably specify a one-tailed exact test. So we can take a Neyman-Pearson framework within the setup of a Fisher exact-test (condition on the margins, use hypergeometric probabilities); just as R is happy to do.

A p-value in that framework is the probability of being at least as extreme as the observed table in the direction of the alternative. If you have the table with top left element 3, i.e.: 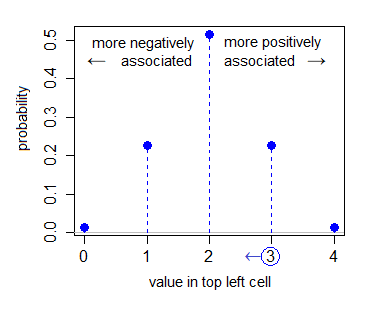 It's high because you have a table showing positive association -- almost all the probability distribution is there or further left; only 1/70 of the null distribution is to the right. That is, the alternative is in the "wrong direction" relative to what the data indicate, much like having a z-test for a mean where say z=2.19 but you were doing a one-tailed test where the alternative was below the hypothesized mean, not above it.

15
What does the assumption of the Fisher test that "The row and column totals should be fixed" mean?