Simpson's Paradox is a fairly simple phenomenon to describe and to give numerical examples of (the reason why this can happen is deep and interesting). The paradox is that there exist 2x2x2 contingency tables (Agresti, Categorical Data Analysis) where the marginal association has a different direction from each conditional association.

That is, comparison of ratios in two subpopulations can both go in one direction but the comparison in the combined population goes in the other direction. In symbols:

This is accurately represented in the following visualization (from Wikipedia ): 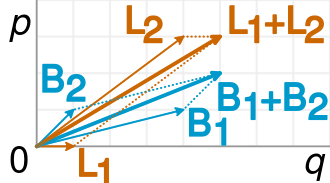 There is a very common visualization in many forms, one in particular at the front of that wikipedia reference on Simpson's: 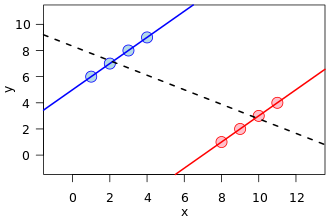 This is a great example of confounding, how a hidden variable (which separates two sub populations) can show a different pattern.

However, mathematically, such an image in no way corresponds to a display of the contingency tables that are at the basis of the phenomenon known as Simpson's paradox. First, the regression lines are over real-valued point set data, not count data from a contingency table.

Also, one can create data sets with arbitrary relation of slopes in the regression lines, but in contingency tables, there is a restriction in how different the slopes can be. That is, the regression line of a population can be orthogonal to all the regressions of the given subpopulations. But in Simpson's Paradox the ratios of the subpopulations, though not a regression slope, cannot stray too far from the amalgamated population, even if in the other direction (again, see the ratio comparison image from Wikipedia).

For me, that is enough to be taken aback every time I see the latter image as a visualization of Simpson's paradox. But since I see the (what I call wrong) examples everywhere, I'm curious to know:

Addendum: Here is an example of a generalization to a 2xmxn (or 2 by m by continuous) table: 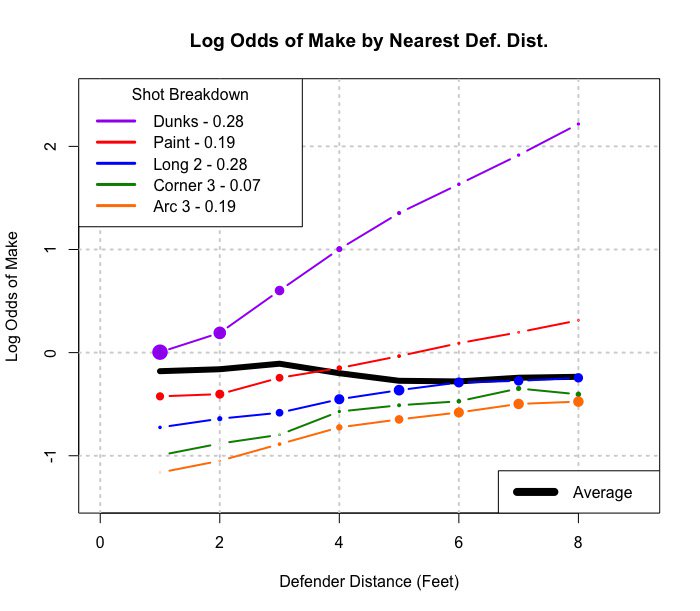 If amalgamated over shot type, it looks like a player makes more shots when defenders are closer. Grouped by shot type (distance from basket really), the more intuitively expected situation occurs, that more shots are made the further away defenders are.

This image is what I consider to be a generalization of Simpson's to a more continuous situation (distance of defenders). But I still don't see yet how the regression line example is an example of Simpson's.

The main issue is that you are equating one simple way to show the paradox as the paradox itself. The simple example of the contingency table is not the paradox per se. Simpson's paradox is about conflicting causal intuitions when comparing marginal and conditional associations, most often due to sign reversals (or extreme attenuations such as independence, as in the original example given by Simpson himself, in which there isn't a sign reversal). The paradox arises when you interpret both estimates causally, which could lead to different conclusions --- does the treatment help or hurt the patient? And which estimate should you use?

Surely Simpson's is a particular instance of confounding error.

This is incorrect! Simpson's paradox is not a particular instance of confounding error -- if it were just that, then there would be no paradox at all. After all, if you are sure some relationship is confounded you would not be surprised to see sign reversals or attenuations in contingency tables or regression coefficients --- maybe you would even expect that.

So while Simpson's paradox refers to a reversal (or extreme attenuation) of "effects" when comparing marginal and conditional associations, this might not be due to confounding and a priori you can't know whether the marginal or the conditional table is the "correct" one to consult to answer your causal query. In order to do that, you need to know more about the causal structure of the problem.

Consider these examples given in Pearl:

Pearl's explanation of why this was deemed a "paradox" and why it still puzzles people is very plausible. Take the simple case depicted in (a) for instance: causal effects can't simply reverse like that. Hence, if we are mistakenly assuming both estimates are causal (the marginal and the conditional), we would be surprised to see such a thing happening --- and humans seem to be wired to see causation in most associations.

So back to your main (title) question:

In a sense, this is the current definition of Simpson's paradox. But obviously the conditioning variable is not hidden, it has to be observed otherwise you would not see the paradox happening. Most of the puzzling part of the paradox stems from causal considerations and this "hidden" variable is not necessarily a confounder.

As discussed in the comments, the algebraic identity of running a regression with binary data and computing the differences of proportions from the contingency tables might help understanding why the paradox showing up in regressions is of similar nature. Imagine your outcome is $y$, your treatment $x$ and your groups $z$, all variables binary.

Then the overall difference in proportion is simply the regression coefficient of $y$ on $x$. Using your notation:

And the same thing holds for each subgroup of $z$ if you run separate regressions, one for $z=1$:

Am I missing a subtle transformation from the original Simpson/Yule examples of contingency tables into real values that justify the regression line visualization?

Yes. A similar representation of categorical analyses is possible by visualizing the log-odds of response on the Y-axis. Simpson's paradox appears much the same way with a "crude" line running against the stratum-specific trends weighted in distance according to the stratum referent log-odds of the outcome.

Here's an example with the Berkeley admissions data 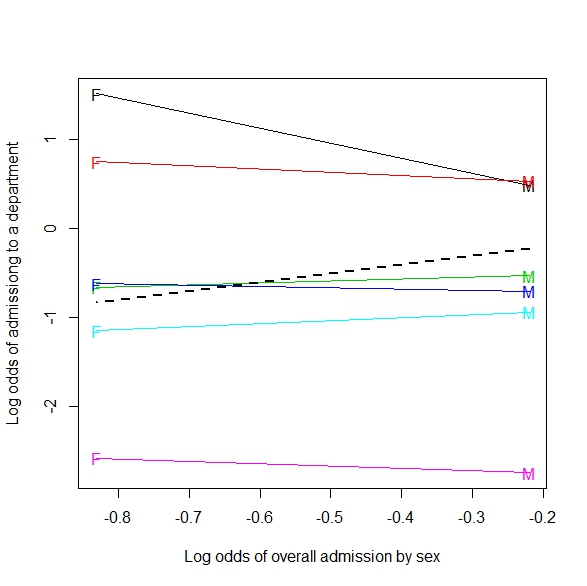 Here gender is a male/female code, on the X-axis is the crude admissions log-odds for male versus female, the heavy dashed black line shows gender preference: the positive slope suggests a bias toward male admissions. The colors represent admission to specific departments. In all but two cases, the slope of the department-specific gender-preference line is negative. If these results are averaged together in a logistic model not accounting for interaction, the overall effect is a reversal favoring female admissions. They applied to harder departments more frequently than did males.

Briefly, no. Simpson's paradox is merely the "what" whereas confounding is the "why". The dominant discussion has focused on where they agree. Confounding may have a minimal or negligible effect on estimates, and alternately Simpson's paradox, while dramatic, may be caused by non-confounders. As a note, the terms "hidden" or "lurking" variable are imprecise. From an epidemiologist perspective, careful control and design of study should enable measurement or control of possible contributors to confounding bias. They need not be "hidden" to be a problem.

There are times in which point estimates may vary drastically, to the point of reversal, that does not result from confounding. Colliders and mediators are also change effects, possibly reversing them. Causal reasoning warns that for studying effects, the main effect should be studied in isolation rather than adjust for these as the stratified estimate is wrong. (It is akin to inferring, incorrectly, that seeing the doctor makes you sick, or that guns kill people hence people don't kill people).

Not the answer you're looking for? Browse other questions tagged mathematical-statistics data-visualization causality contingency-tables simpsons-paradox or ask your own question.

2
Intuitive explanation for inconsistency between regression and correlation coefficient sign
93
The Book of Why by Judea Pearl: Why is he bashing statistics?
5
Slope of independent variable is larger when I divide sample into subsets
6
Is Simpson's Paradox always an example of confounding?
6
When does Simpson's Paradox "end"?
3
Omitted Variable Bias, verification in Gretl
3
Distribution to match an example with collider bias?