Contradicting p-values for Anova and Kruskal-Wallis on same data: Which is right?

I have created from the data file the following box plot (red dots are the means, and "n" is the number of time values in each group): 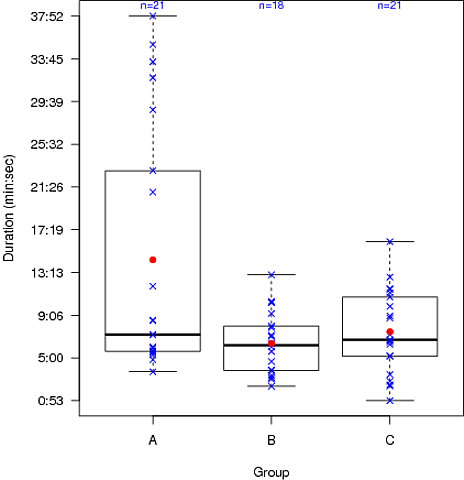 and also the following histogram (duration given in "min:sec"): 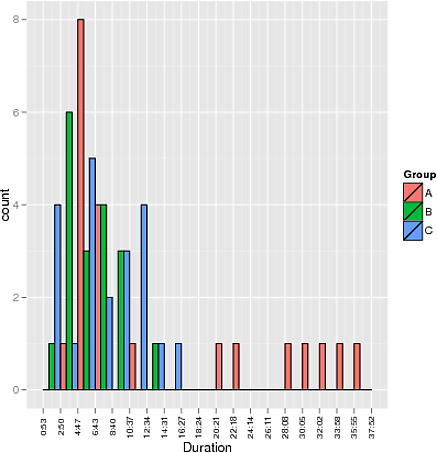 so I should accept that the effect of the groups was not significant (p-value > 0.05).

However, when I run one-way Anova (sanity check just in case Kruskal-Wallis was not the correct choice), Anova's result was:

That is, Anova returns p-value < 0.05, that is, it is telling that the group effect is significant (in this case, group A was significantly different regarding B and C).

However, because of a small number of samples per group and the fact that one group is not normally distributed, I tend to accept Kruskal-Wallis result, but I am not sure.

Should I accept Kruskal-Wallis result because this test is more adequate than Anova for this particular case?

How should I have used the box plot and the histogram to decide for the most adequate test?

The boxplot and histogram tell you all by themselves that your data are skewed, especially in group A. The Shapiro-Wilk test is kind of pointless. With data thusly skewed the ANOVA isn't really appropriate. The Kruskal-Wallis rank sum test is based on the ranks, not the absolute values and doesn't require normality, either in the measures or residuals. It is the more appropriate test.

A quick Google search will tell you one requires normality and one does not.

One thing you might consider is that durations are an arbitrary representation of time. For example, you can indicate the duration of an event as 2 s or you can say the event has a rate 0.5 events/s. It's the exact same thing and both numbers can arbitrarily be interchanged for representation. However, rates tend to be much less skewed and more appropriate for statistical analysis. It's possible your rates are normally distributed and you can use ANOVA in that case.

If you do decide to look at rates, keep in mind that the direction of magnitude changes, a higher duration values = a lower rate value. Some people use a negative rate just to avoid that confusion.

The Kruskal-Wallis test and the Anova test are testing different hypotheses, both could be correct, the answers differ because they are answering different questions.

Two things to keep in mind: first, ANOVA is robust in the face of non-normality if sample sizes are equal - the larger the difference in sample sizes, the less reliable it is; second, the K-W test is not a test of means or medians - it is really a test of similarity of distributions and, if the distributions are similar, it can be interpreted as a test of location. In my experience, most people ignore that both the Mann-Whitney and K-W test expect (require) the groups being compared to have similar distributions.

Several options are available for your problem. You might try a data transformation (e.g., log) to put the data on a scale that yields normal distributions in each group. Or, you might try running standard ANOVA after replacing the data with their ranks. Both approaches are effective when the assumptions for ANOVA are violated.

Not the answer you're looking for? Browse other questions tagged hypothesis-testing anova p-value kruskal-wallis or ask your own question.

21
Difference Between ANOVA and Kruskal-Wallis test