How to sample uniformly from 2-dim region with sinusoidal shape

I have a pair of continuous random variables $\{X,\,Y\}$ that follow a 2-dim density $f_{XY}$ which is uniform over a region (denoted $\mathcal{R}$) and zero elsewhere. The region $\mathcal{R}$ is the "hill top" of a sinusoidal wave such that

where the amplitude $A > 0$ can be any positive value except integers, and $\lfloor A \rfloor$ is the usual flooring, giving the largest integer (including zero) that is less than $A$.

$X$ and $Y$ are correlated simply because $\mathcal{R}$ is not a rectangle.

How to sample uniformly from $\mathcal{R}$ described above?

Currently I'm doing acception/rejection, but as usual it is not very efficient: generate $\{x,y\}$uniformly from the rectangle with width $x_0$ and height $g(0)$, and reject those out side of $\mathcal{R}$ where $y > g(x)$. This rejects about $1/3\ldots$ not too bad, but I wonder if it can be improved.

It's not clear to me if there's a transformation that can decouple $X$ and $Y$.

Another approached I have considered is to discretize the region (for given desired sample size $n$) into regular lattice points, then it becomes equivalent to a discrete sampling from $\{1,2,\ldots, n\}$. However, this feels like cheap shot, appropriate just for a certain kind of computations.

It's been many years since I last used Gibbs sampling so I'm still studying how to implement it.

For instance, here is an R code that inverts $G$:

By drawing first coordinates by cdf inversions, and second coordinates as $\mathcal{U}(0,g(x))$, one gets uniform points under the curve g: 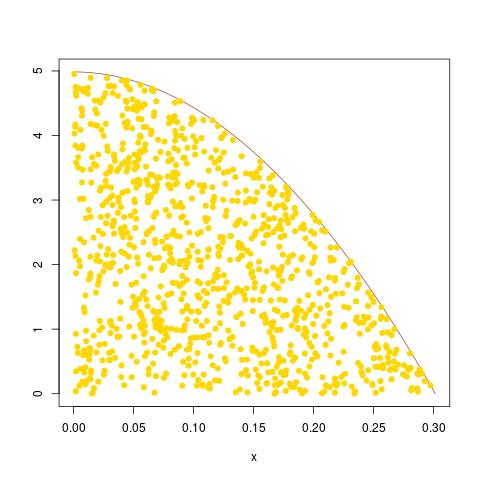 Another approach is to use the upper bound $$\cos x \le 1-\frac{x^2}{2}+\frac{x^4}{4!}$$ and figure out a way to simulate from this polynomial density, a secondary accept-reject step being a solution.

The density $g$ being concave, it can also be sandwiched by piece-wise linear functions going through points $(x,g(x))$, suggesting a Gilks and Wild (1992) ARS algorithm. Without the need for a log-transform. 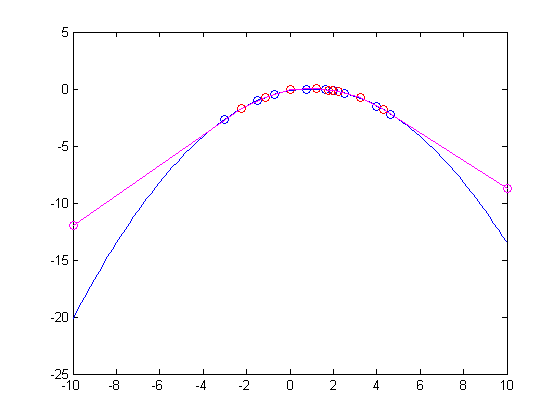 Not the answer you're looking for? Browse other questions tagged sampling monte-carlo continuous-data uniform-distribution or ask your own question.

7
The fundamental theorem of simulation

5
How to sample uniformly from an intersection of simplices?
8
How can I sample from a distribution with incomputable CDF?
8
How to generate samples uniformly at random from multiple discrete variables subject to constraints?
1
If the population is uniformly distributed is the sample necessarily uniformly distributed?
5
How to uniformly sample vertices from a large graph with given distance from a fixed vertex?
12
How to sample uniformly from the surface of a hyper-ellipsoid (constant Mahalanobis distance)?
0
Sampling from sample (and not from population, and not from distribution)
4
How do you uniformly sample spans from a bounded line?
4
Uniformly sample pieces of a rectangle