I've been exploring a number of tools for forecasting, and have found Generalized Additive Models (GAMs) to have the most potential for this purpose. GAMs are great! They allow for complex models to be specified very succinctly. However, that same succinctness is causing me some confusion, specifically in regard to how GAMs conceive of interaction terms and covariates.

Consider an example data set (reproducible code at end of post) in which y is a monotonic function perturbed by a couple of gaussians, plus some noise: 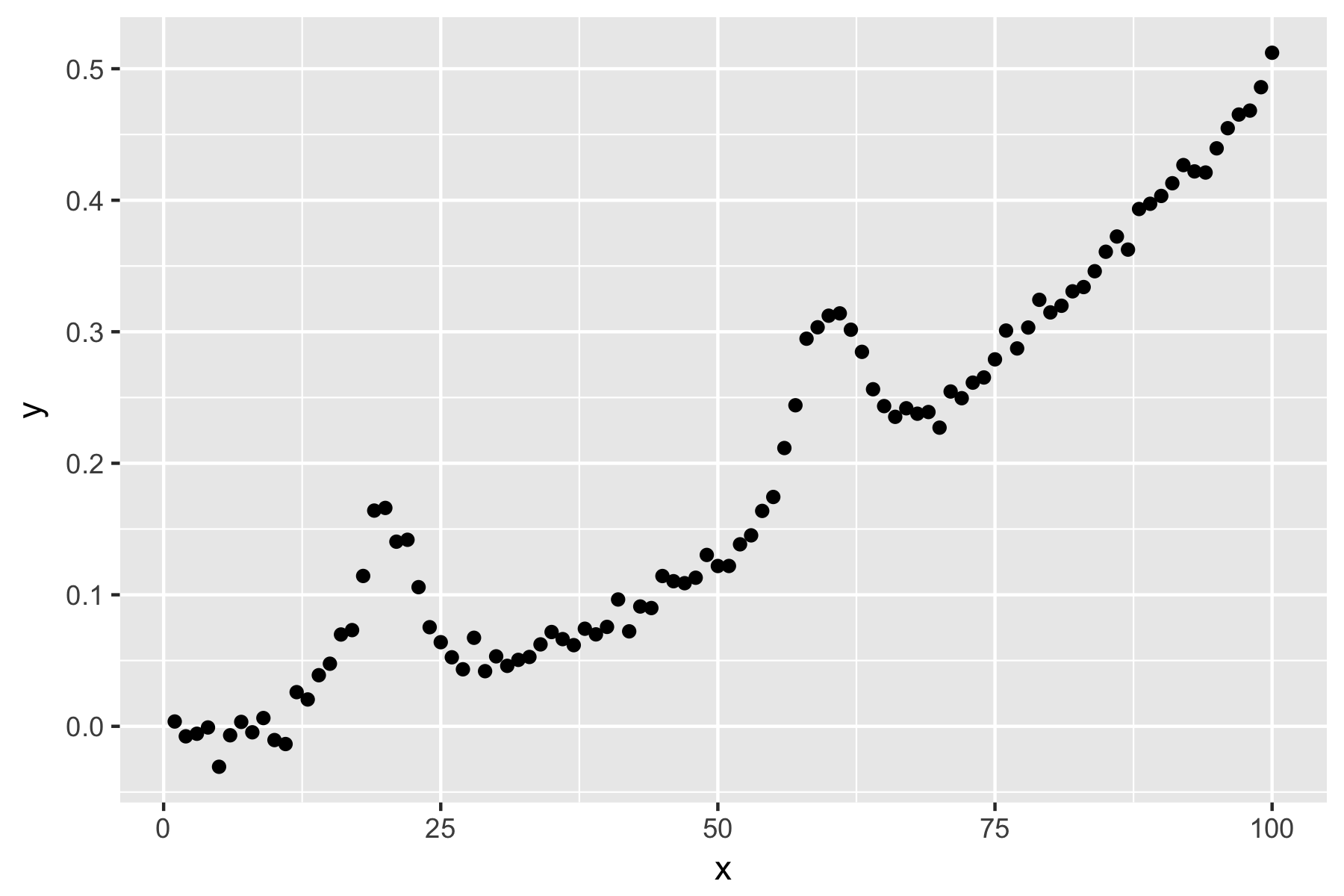 The data set has a few predictor variables:

R's mgcv package makes it easy to specify a number of possible models for these data: 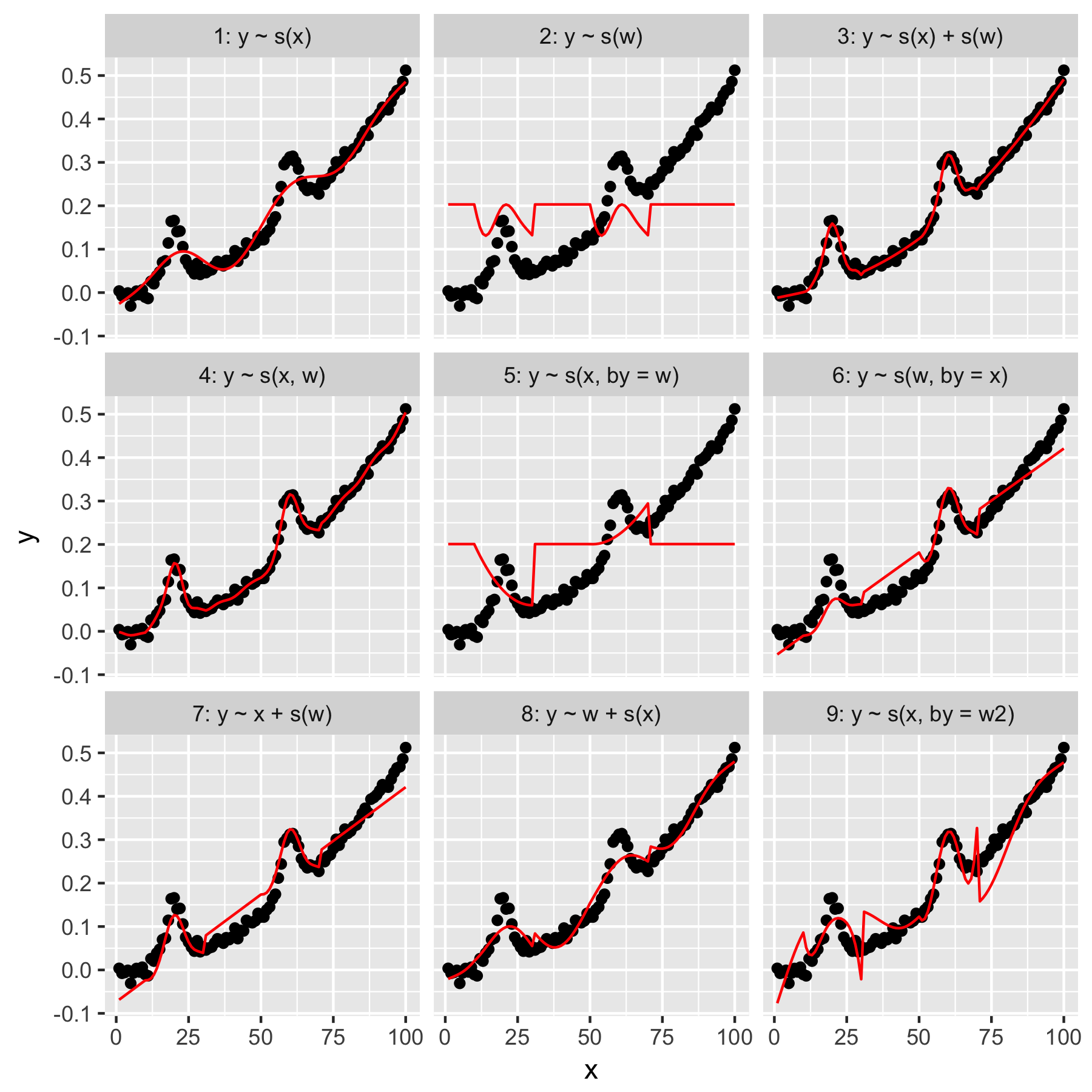 Model 3 uses both x and w as 1D smooths, producing a nice fit. Model 4 uses x and w in a 2D smooth, also giving a nice fit. These two models are very similar, though not identical.

Model 5 models x "by" w. Model 6 does the opposite. mgcv's documentation states that "the by argument ensures that the smooth function gets multiplied by [the covariate given in the 'by' argument]". So shouldn't Models 5 & 6 be equivalent?

Models 7 and 8 use one of the predictors as a linear term. These make intuitive sense to me, as they are simply doing what a GLM would do with these predictors, and then adding the effect to the rest of the model.

Lastly, Model 9 is the same as Model 5, except that x is smoothed "by" w2 (which is w + 1). What's strange to me here is that the absence of zeros in w2 produces a remarkably different effect in the "by" interaction.

So, my questions are these:

Q1 What's the difference between models 3 and 4?

Model 3 is a purely additive model

Model 4 is a smooth interaction of two continuous variables

In a practical sense, Model 3 says that no matter what the effect of $w$, the effect of $x$ on the response is the same; if we fix $x$ at some known value and vary $w$ over some range, the contributions from $f_1(x)$ to the fitted model remains the same. Verify this if you want by predict()-ing from model 3 for a fixed value of x and a few different values of w and use the type = 'terms' argument of the predict() method. You'll see a constant contribution to the fitted/predicted values for s(x).

This is not the case of model 4; this model says that the smooth effect of $x$ varies smoothly with the value of $w$ and vice-versa.

Note that unless $x$ and $w$ are in the same units or we expect the same wiggliness in both variables, you should be using te() to fit the interaction. 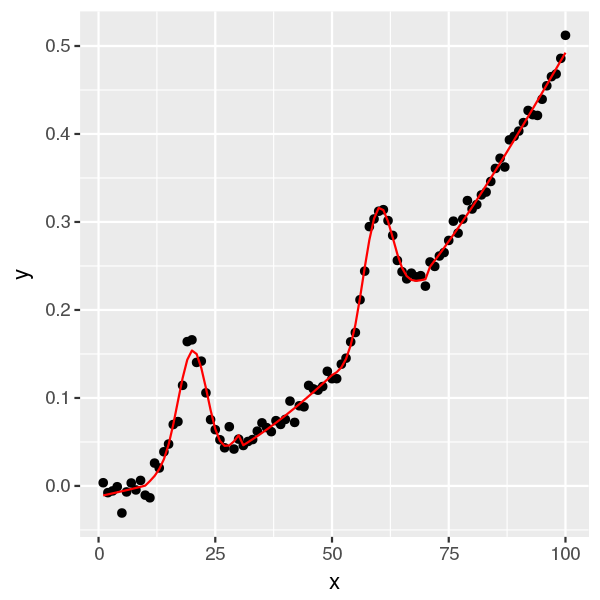 In one sense, model 4 is fitting

where $f_3$ is the pure smooth interaction of the "main" smooth effects of $x$ and $w$, and which have been removed, for sake of identifiability, from the basis of $f_3$. You can get this model via

but note this estimates 4 smoothness parameters:

A fundamental problem with all these models is that the effect of $w$ is not strictly smooth; there's a discontinuity where the effect of $w$ falls to 0 (or 1 in w2). This is showing up in your plots (and the one I show in detail here).

by variable smooths can do a number of different things depending on what you pass to the by argument. In your examples the by variable, $w$ is continuous. In that case what you get a varying coefficient model. This is a model in which the linear effect of $w$ varies smoothly with $x$. In equation terms this is what your, say model 5, is doing

If this isn't immediately clear (it wasn't to me when I first looked at these models) for some given values of $x$ we evaluate the smooth function at this value and this then become the equivalent of $\beta_1 w$; in other words, it is the linear effect of $w$ at the given value of $x$, and those linear effects vary smoothly with $x$. See section 7.5.3 in the second edition of Simon's book for a concrete example where the linear effect of a covariate varies a smooth function of space (lat and long).

Q3 Why would there be such a notable difference between Models 5 and 9?

Not the answer you're looking for? Browse other questions tagged r modeling gam mgcv or ask your own question.

2
Specifying interaction formulae in a signal regression (with mgcv)

2
Generalized Additive Model interpretation with ordered categorical family in R
0
Layman's explanation of basis dimension (k) in Generalized Additive Models (GAMs)
9
Adaptive GAM smooths in mgcv
2
GAM selection when both smooth and parametric terms are present
8
Different ways of modelling interactions between continuous and categorical predictors in GAM
3
When and why would you not want to use a GAM?