I am performing a Wilcoxon signed rank test on my dataset. Because the sample size is quite small I use exact p values (as described here.)

Isn't it impossible for p to become exactly 1 since there is always a remaining probability for the null hypothesis to be wrong? Or maybe I am just doing a simple logic mistake.

It's easily possible for a p-value to be exactly 1 if you have a discrete test statistic (as here).

Isn't it impossible for p to become exactly 1 since there is always a remaining probability for the null hypothesis to be wrong? Or maybe I am just doing a simple logic mistake.

A p-value is the probability of getting a test statistic at least as extreme as the one you got when the null is true. In the case of the signed rank test it's easy to have the signed pair differences centered* at zero, so that the are no values for the test statistic that are less extreme than the one you observe. 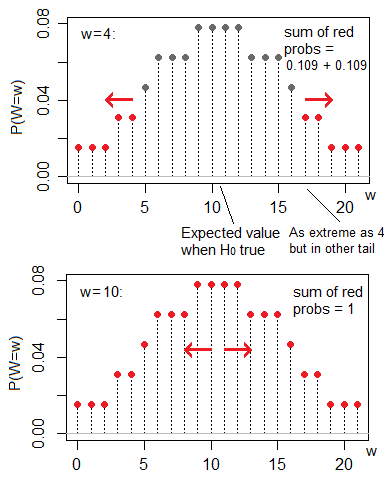 There's no value for the test statistic less extreme than 10 -- it's as consistent with the null as it's possible to get. Since every possible value is at least as extreme as the observed statistic, the p-value is 1.

If you have a symmetric distribution of the test statistic and the one-tailed p-value is no more than 0.5 -- but a one-tailed p-value could be 0.6, or even as much as 1.0 ... you don't double those. (You subtract them from 1 and then double.)

* (in the way that the signed rank statistic measures center)

Not the answer you're looking for? Browse other questions tagged wilcoxon-signed-rank or ask your own question.