Increase difference between mean and median

Looking at 2 strata of my data. Stratum 1 has a bigger difference between the median and mean than stratum 2. This means that the distribution of stratum 1 deviates even more from a normal distribution than stratum 2 (i.e. it is more tailed). What else does it tell us?

I think the answer is "nothing". That is, by itself, the fact that the difference between the mean and median is larger in one stratum doesn't tell you anything other than that the difference is larger. In fact, depending on what you mean by "deviates" it might not even tell you that it is farther from normal, because it could be that the strata have very different means and medians.

Suppose that the distributions had the same shape, but that one stratum had much larger values, then that stratum would have a larger difference.

As people said in the comments, the best way to examine this is to graph the data. You could start with overlaid density plots of each distribution, a parallel box plot, and a qq plot.

The OPs question expresses a wish to learn "what else this tells us," i.e., what additional information and/or insights can be gleaned from these behaviors?

Another descriptive term for the information as described is overdispersed, aka extreme values or "outliers". Classic examples of overdispersed or skewed information include wealth and income, size of insurance claims, earthquake magnitude, etc. Exponential assumptions, including the normal distribution, are robust to some degree of overdispersion. The question then becomes, how overdispersed is it? In other words, is the data so overdispersed that commonly used exponential tests and assumptions no longer apply?

There are two widely used conventions or rules of thumb for dealing with extreme values: first, delete, trim or Winsorize the outliers, based on an implicit assumption that the extreme values are incorrect and do not represent meaningful information, or, second, transform the data using functions such as the natural log, inverse hyperbolic sine or Lambert's W. These transformations compress much of the skewness. This latter approach has the advantage of assuming that the extreme values are meaningful and are to be retained, but both of these approaches have the major disadvantage of complicating the retransformation of model predicted values (assuming there is a model) back into their original units.

These two conventions will work, for the most part, except in those cases where the extreme values are truly extreme. The graph (below) is an example of truly extreme values in a distribution, based on lognormal assumptions. The graph is on a log-log scale (i.e., each axis is expressed in powers of 10) and the highlighted region of the graph demonstrates a "lack of fit" in the tail of the distribution. It is taken from the famous, eponymous Zipf's Law which shows the distribution of city population or size. George Kingsley Zipf (1902-1950), in his 1932 book Selected Studies of the Principle of Relative Frequency in Language, described a “statistical law of relative word frequency.” In words, Zipf's Law states, "The frequency of any word is inversely proportional to its rank." Zipf later applied this law to the distribution of words, languages, city populations, and more. 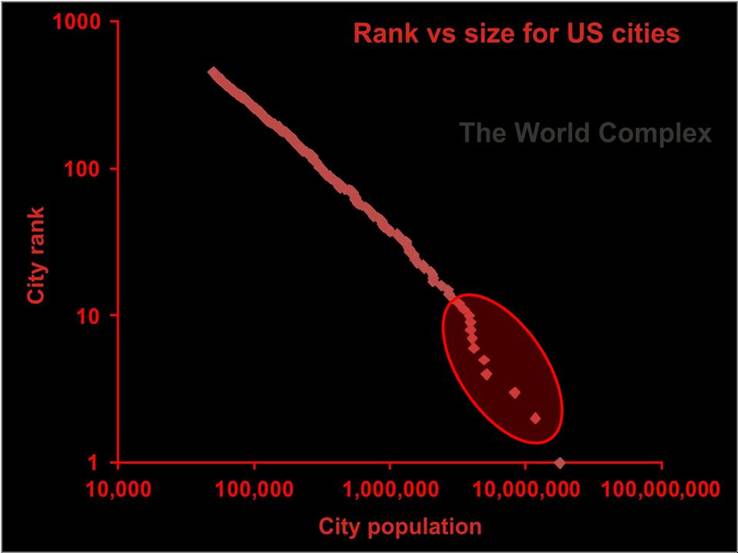 When the magnitude of the overdispersion is great, as demonstrated above, one solution is to revert to distribution-free, robust, nonparametric analyses, models and tests, e.g., replacing the mean with the median, using Gini median deviation (GMD) instead of the std deviation, employing nonparametric tests such as the Wilcoxon instead of F- or t-tests, quantile regression instead of GLMs, and so on.

A second, perhaps more insightful, solution that goes beyond heuristics and rules of thumb is to estimate the magnitude or degree of overdispersion using what's known as a tail exponent or tail index. Once that exponent is estimated, then there are heuristics for assigning a distributional assumption to the information (e.g., see the Examples section in this wiki article about Tweedie distributions, https://en.wikipedia.org/wiki/Tweedie_distribution). In the graph of Zipf's Law, the estimated tail exponent is ~1.0, which is consistent with relative proportionate growth.

An easily employed method for tail exponent estimation is described in Gabaix's paper Rank − 1/2: A Simple Way to Improve the OLS Estimation of Tail Exponents (here ... http://pages.stern.nyu.edu/~xgabaix/papers/RankMinusOneHalf.pdf). There are more rigorous but less easily implemented methods for estimating this exponent such as Hill's method and Pickand's method but these should only be deployed when an easily derived exponent based on Gabaix's method is much greater than 2.0. The reason, and this gets a little complicated, is that tail exponents estimated using Gabaix's approach are relevant only for scalable or proportionate models of growth such as log-log or lognormal scales. For example, if the exponent is around 1.0, on a log-log scale scatterplot it will resemble a straight line, which implies visual consistency or "fit" with lognormal assumptions (as above). When a Gabaix-estimated exponent is much greater than 2.0, this method no longer provides a reliable estimate. This implies nonscalable or wild (Mandelbrot's word) extreme values which depart, are not consistent with and/or do not fit lognormality.

When lack of fit with lognormal assumptions is found (e.g., when tail exponents using Gabaix's method are much greater than 2.0), my view is that there are three options: first, reversion to the distribution-free, nonparametric assumptions and models as described above. This is, by far, the easiest solution and is valid no matter how extreme the data. Second, try using stretched-exponential assumptions, distributions and models as described in this paper by Sornette, et al, Stretched Exponential Distributions in Nature and Economy: Fat Tails with Characteristic Scales. This approach is not as easily employed, is parametric and retains assumptions from the exponential family of distributions. Third, employ information-theoretic, complexity-based methods and models which do not rely on statistical assumptions such as the moments of a statistical distribution (one such approach is developed by Brandmaier wrt his permutation distribution clustering, e.g., here .... https://pdfs.semanticscholar.org/7f64/a1addd187bb3e83affa712903cdce94ea239.pdf).

However, the OPs question is more specific than these general, all purpose suggestions (or solutions) imply. Their choice of the word strata implies that the sample is no longer a simple random sample and has been drawn using some type of stratified or cluster sampling design. If the sample is, in fact, not simple random, it is recommended to use special software or statistical routines that adjust or compensate for this baked-in fact of design structure. Simply running the data through conventional software using simple random assumptions which do not compensate for this structure will result in misleading inferences. If applied, these "compensating" routines and software might more appropriately adjust (mitigate) the degree of overdispersion observed, thereby changing the findings.

The OPs specific concern is that, based on the analysis as it stands, the observed degree of overdispersion may differ between the two strata and, therefore, may require different solutions. Regardless of whether or not the data is stratified and the magnitude of overdispersion between strata is "real," my opinion is that any approach or solution chosen needs to be applied to both (all) strata. In other words, I don't think it would be advisable to use one approach for one stratum and a different approach for the other. If that is the case, then the branching logic developed above would still be relevant. The path chosen would be a function of one's comfort, knowledge and training.

Not the answer you're looking for? Browse other questions tagged distributions mathematical-statistics normal-distribution descriptive-statistics or ask your own question.

1
How to intuitively explain the maths behind overdispersion?