Is it possible to visualize my data set in Excel?

My data set consists of columns containing universities in the Boston area, and rows containing zip codes. For each university and zip code, there are two data points: number of students in campus housing, and number in non-campus housing. So that's two independent variables (x, y), and for each such pair, there are two dependent variables z1 and z2. I'm trying to visualize this in Excel, but not finding a chart type that could handle it. My best idea would be a sort of bubble chart, with x and y on the axes, and the z1 and z2 represented as bubbles, but I can't make this work. Can anyone suggest a way to do this, or another visualization that would work?

Using Excel, a quick way to visualize your data set is a small-multiple dot plot. Take each University in a separate chart and plot their housing counts per zip code. Your result could look something like this: 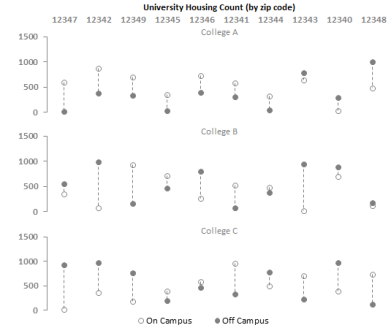 Obviously, sorting and layout (columns v rows) will signicantly change what is emphasized. As an example, this chart is sorted by College A's difference between on and off campus housing.

Also, as @whuber mentioned, mapping is another good option (even in Excel). You could also build a small multiple choropleth set of zip codes with the difference between on and off campus counts expressed through a divergent color scheme. My question would be if their location is really an important analytical component, or if their zip code really was more a proxy for another character (e.g. income, race, age, etc...).

For a quick easy way to map in Excel, check out the tutorials at tushar-mehta and Clearly and Simply

And, you can't go wrong checking out John Peltier's website.

EDIT: How to create a small-multiples dot plot in Excel (that doesn't look like Excel).

Here's what it looks like when complete. The red lines show how the charts match up with the Excel grid (which I've turned back on for the image). All the text in red is directly in Excel (I used formulas to pull the appropriate zip code from the table, based upon the sort order). All other text, lines and markers are in the 3 charts, but instead of default black, I've changed them all to dark gray. 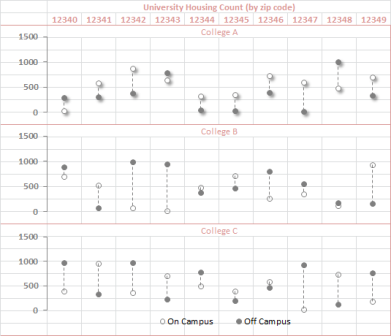 Not the answer you're looking for? Browse other questions tagged data-visualization excel or ask your own question.