Why can we assume a single sample is normally distributed?

After stating the above, most authors just proceed with taking one random sample to estimate a certain population parameter and assume it is normally distributed in the calculations. For example the computation of the critical values (z-scores) is based on a normal distribution. But we just said that the underlying population might not be normally distributed and neither single samples.

Here's one example to illustrate my question:

A random sample of 605 plain M&Ms contains 87 red M&Ms. Find a 95% confidence interval for the population proportion of red M&Ms.

You got the sample, and use an estimator to obtain a given property, such as the mean $\hat \mu$. The value of the estimator is a random value itself, and comes from some unknown distribution, called a sampling distribution. What your ">30" rule of thumb says is that this distribution could be approximated by the normal distribution if the sample size is larger than 30 observations. I'm not here to discuss the validity of this rule itself.

So, we're not saying here that a "single sample is normally distributed." In fact I don't even understand what you mean when saying this. We're talking about the sampling distribution of the parameter estimator such as the average $\bar x=\frac 1 n \sum_{i=1}^nx_i$. We're not saying anything about the distribution of $x_i$, because the sample size does not have anything to do with it.

The magic of the central limit theorem is that, no what what distribution the sample is drawn from, it's mean is approximately normally distributed.

Think about this way: you have a population of, say, 10.000.000.000 bottles some of which are defective (however we might choose define that). Rather than counting of all them, you draw 100 samples each of 100 bottles and for each sample you compute the mean. Now, if you plot a histogram of those means you will get the sampling distribution of the mean - and it will look like a normal distribution.

We can build a small scale simmulation to show this example, here written in R:

This produces the following plot (where the blue line is the actual sample distribution, and the black curve is the estimated one): 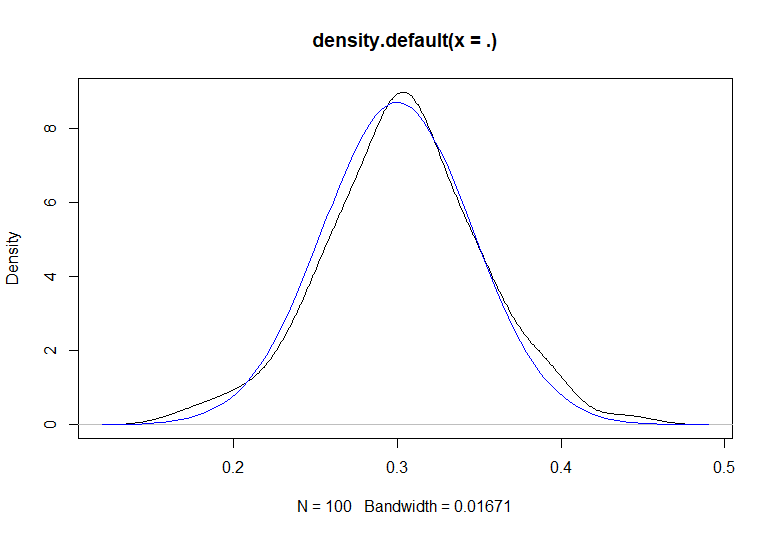 Of course, this does not fit entirely perfect to the result implied by the CLT - certainly I would not call it "decidedly non-normal".

It is also worth noting some technical details, which @whuber hints to in the comments. There are in fact many central limits theorems, which implies different convergence types towards different distributions based on the different assumptions. Here I refer to the version commonly encountered in introductory stats books, which (roughly) states the sample mean follows a normal distribution under the assumption that the sample is i.id and provided the population has finite mean and variance. So long as these assumption are met, $X$ can follow any distribution. This means that sample means from a Cauchy distribution will not converge to anything in particular. Therefore the qualifier “any distribution” should be taken with a grain of salt.

Then there is the matter of how large $n$ should be before we can use the approximation, this is really case specific and so its rough to give general guidelines. I think most experienced users on this forum would say that 30 is not enough, but personally have also seen cases where 100.000 observations where considered to small a sample. For instance, if you a machine that output a bottle, you would this machine to very consistent and so a few broken bottles in small sample is likely enough to suggest that the machine needs maintenance. On the other hand, if you are dealing with some aspect of human genome you will probably need a very large sample to provide a convincing argument.

Not the answer you're looking for? Browse other questions tagged estimation sampling central-limit-theorem or ask your own question.

2
Single sample versus multiple sample
5
Why is the sampling distribution of normal distributed variable automatically also normal distributed
13
Why does the central limit theorem work with a single sample?
3
Why are all CLT problems using a single random sample when the CLT requires "repeatedly drawing random samples"?
6
Asymptotically Normally Distributed
1
Why check for normality of data in a sample?
0
Can someone explain to me the sampling distribution of sample variance in comparison to that of the sample mean?
1
Estimating the subset of a population which are sucessful when the population itself is an estimate