Why does log-transformation of the RNA-seq data reduce the amount of explained variance in PCA?

I am running a PCA on a dataset with 2k rows and 36k columns. I noticed that when I log-transform the data I need to ask for more principal components during PCA to achieve the same amount of explained variance (see images attached).

What is the underlying reason for this? I have a naive intuition that log-transforming "compresses" the data, therefore the amount of explained variance for the different principal components is being "homogenized". Is there a rigorous explanation for this or did I make a mistake? 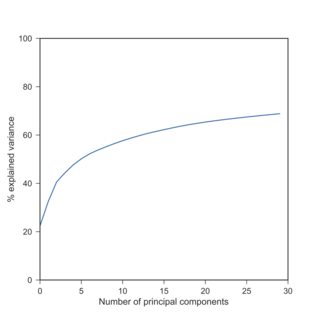 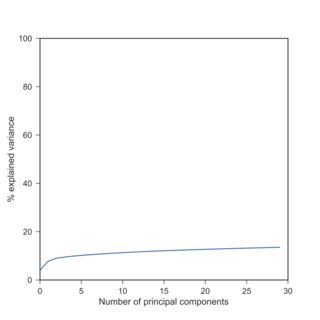 Based on the size of your dataset, I suspect you are working with the single cell RNA-seq data.

If so, I can confirm your observation: with scRNA-seq data, PCA explained variances after log-transform are typically much lower than beforehand. Here is a replication of your finding with the Tasic et al. 2016 dataset I have at hand: 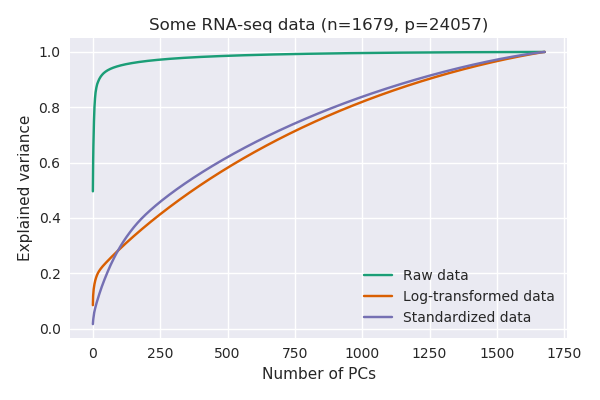 Here I used $\log(x+1)$ because of exact zeros. Note that log-transformed data yield explained variances roughly similar to the standardized data (when each variable is centered and scaled to have unit variance).

The reason for this is that different variables (genes) have VERY different variances. RNA-seq data are ultimately counts of RNA molecules, and the variance is monotonically growing with the mean (think Poisson distribution). So the genes that are highly expressed will have high variance whereas the genes that are barely expressed or detected at all, will have almost zero variance: 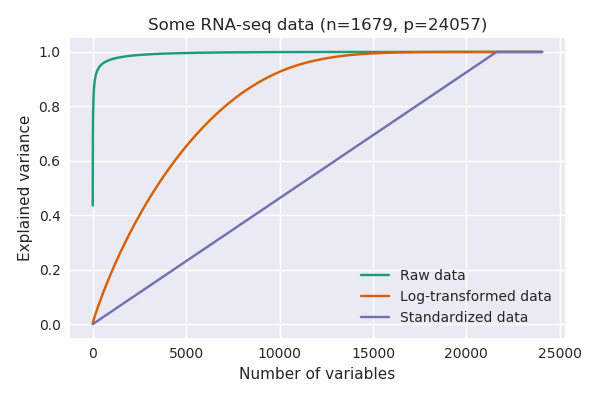 Without any transformations, there is one gene that alone explains above 40% of the variance (i.e. its variance is above 40% of the total variance). In this dataset, it happens to be this gene: https://en.wikipedia.org/wiki/Neuropeptide_Y which is very highly expressed (RPKM values over 100000) in some cells and has zero expression in some other cells. When you do PCA on the raw data, PC1 will basically coincide with this single gene.

This is similar to what happens in the accepted answer to PCA on correlation or covariance?:

Notice that PCA on covariance is dominated by run800m and javelin: PC1 is almost equal to run800m (and explains 82% of the variance) and PC2 is almost equal to javelin (together they explain 97%). PCA on correlation is much more informative and reveals some structure in the data and relationships between variables (but note that the explained variances drop to 64% and 71%).

In the comments, @An-old-man-in-the-sea brought up the issue of the variance-stabilizing transformations. The RNA-seq counts are usually modeled with a negative binomial distribution that has the following mean-variance relationship: $$V(\mu) = \mu + \frac{1}{r}\mu^2.$$

If we neglect the first term (which makes some sense under assumption that highly expressed genes carry the most information for PCA), then the remaining mean-variance relationship becomes quadratic which coincides with the log-normal distribution and has logarithm as the variance stabilizing transformation: $$\int\frac{1}{\sqrt{\mu^2}}d\mu=\log(\mu).$$

Alternatively, small powers $\mu^\alpha$ with e.g. $\alpha\approx 0.1$ or so can also make sense and would be variance-stabilizing for $V(\mu)=\mu^{2-2\alpha}$, so something in between the linear and the quadratic mean-variance relationships.

The PCA uses only linear algebra to find "best" components to explain the variance. See this answer for longer explanation on PCA. Therefore if your dataset already has linear relationships between its variables, you'll get best linear models without any non-linear transformations on raw data.

You could ask your question again using exp or tanh or any non-linear function instead of log and you could expect similar effect. You are basically worsening linear relations between variables when you apply logarithm (or any function) on a variable. Usually it is good to have some theoretical basis to log-transform a variable.

Not the answer you're looking for? Browse other questions tagged variance pca data-transformation logarithm bioinformatics or ask your own question.

196
PCA on correlation or covariance?
106
"Best" series of colors to use for differentiating series in publication-quality plots
116
PCA and proportion of variance explained
24
Why log-transforming the data before performing principal component analysis?
12
Are $\frac18$-th root transformations recommended?