I am looking for a solution to detect photos that are manipulated with tools such as Photoshop. For a start, I want to detect copy-pasted images.

Any idea how to detect photos that are manipulated by pasting another photo on the top of the original photo?

For example, detecting a photo of an id card with a photo of a face pasted in the place of an original face.

To make it even more difficult, let's assume we down sample the image after pasting the face in place. This will smooth the sharp edges of the pasted image.

3) This, is a summary of photo forensic methods.

Since there was no real progress in here, I am starting a bounty.

Thank to the bounty and @machine-epsilon, we have a valid answer!

Since this paper came out at ICCV2019, I just add it here.

In general, it's hard to detect tampering and it's a whole field of research in digital image forensics. I'll try to summarise some of the key approaches to this problem. What you're talking about is sometimes called image forgery or image tampering. And the copy-paste operation is called image composition or image splicing.

From a practical perspective there are number of different variants to this problem: 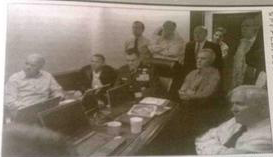 How you solve the problem is going to be very different depending on whether you are involved in a reviewing video surveillance footage, examining a single photo at a court case or running a photo sharing site. The problem is substantially harder if the problem is adversarial and the image manipulation may have been hidden.

Another point is that there is a lot of legitimate postprocessing that happens in images. To take an extreme example new digital camera introduce bokeh and blurring effects even though this is not present in the finished image. So if you are interested in detecting more general types of image manipulation beyond image splicing it's helpful to be aware of what's happening in cameras and apps.

A digital image is acquired on a camera as follows:

By considering the acquisition process you can see several possible points where tampering will result in inconsistencies in the image:

Metadata. An obvious thing to look at is the metadata associated with the image, often it can have camera information, time information and possibly location information. All of these can possible identify inconsistency. If you have the statue of Liberty in your image but the GPS coordinates say you are at McMurdo Station in Antartica then the image is probably a forgery. But the metadata is itself easy altered or stripped so this is not reliable.

Sensor noise. Sensor noise can be quite distinctive for digital camera, so much so that it can used to fingerprint the sensors in different camera models. There are several distinct types of noise introduced by sensors in digital cameras, but a very useful kind is photo-response nonuniformity (PRNU). This is a fingerprint associated with sensor noise and postprocessing, and it is robust to several image processing transformations, including lossy compression such as downsampling. You can calculate the PRNU across blocks in the image, and introducing a new element from a different camera will introduce and inconsistency in the image. This seems to work pretty well, but it works best if you know the camera type. It's still possible to estimte PRNU from a single image. Color filter array interpolation should also be consistent across the image, and will be distrupted by splicing.

Compression and processing artifacts. All image processing techniques will leave a trace on the image statistics. Digital images are very commonly compressed via JPEG which compresses things using the discrete cosine transform. This process leaves traces in the image statistics. One interesting technique is to detect JPEG ghosts, that is parts of an image which have been compressed twice via DCT. As you mention, I believe that downsampling will remove some of these artifacts although the downsampling itself will be detectable.

Scene consistency. An image acquire from single source should have consistent perspective (vanishing points), and illumination. Moreover it's hard to fake these fake these with a composite image. I recommend looking through (Redi et al., 2011) for more details here.

Finally, if you say "Okay I give up. There's too many possible method, I just want a detector" you can look at this recent ICCV paper where they train a detector to find where an image has been manipulated. This may give you some more insight into training a blackbox model.

Not the answer you're looking for? Browse other questions tagged machine-learning neural-networks supervised-learning image-processing manipulation-detection or ask your own question.

109
Detecting a given face in a database of facial images
5
Definition of “Natural Images” in the context of machine learning
25
How does neural network recognise images?
3
How is convolutional network used to locate logos in images?
14
Are there mathematical reasons for convolution in neural networks beyond expediency?
2
Which machine learning approach to use for data with very low variability and a small training set?