Should I use interpolation, mean substitution or ignore missing values in a time series?

I am developing a mean reversion pairs trading strategy using tick data for each asset.

The tick data does not come in fixed intervals. For example it looks something like the below: 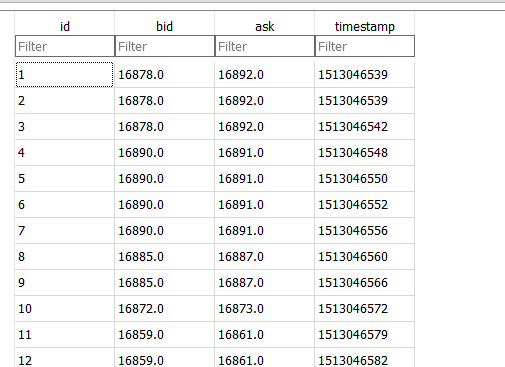 The timestamp is the UNIX timestamp.

To calculate the spread between my assets, I first check that the two timestamps match, and then subtract the bid on one asset from the ask on the other.

I am having to ignore a lot of the data as a lot of the time the timestamps between my two assets do not match.

One way around this would be to plot a time-series with one second intervals and interpolate the missing data.

The strategy I want to use is to open a position when the price spread between the two assets reaches x standard deviations from the mean.

Is there anything wrong with my current method of matching timestamps and not treating the data as a time-series but as a series of time-synchronised data?

I don't think that it makes that much difference as to which method you use . The only way I could find out would be to measure ultimate model accuracy to determine a winner.

What does matter is what you do after you have successfully formed your data matrix. Regression models (without ARIMA structure i.e. appropriate lag structures on all the series) requires among other things independent residuals. If you don't condition your model for auto-regressive time effects your results could be problematical. See http://autobox.com/dave/regvsbox.pdf (which I authored) discusses issues/differences/opportunities/pitfalls when dealing with time series that your possible regression solutions may be ignoring.