I have trained an image classifier (for my own face) via the transfer learning method, in two ways (in order to compare efficiencies later on):

1- I created a docker image, built on top of tensorflow's mobilenet network, and trained it with my own dataset. training was succesful and generated two files:

2- using kerasapi, training my dataset on top of inception network, which generated the single file:

if I did everything right, from both methods the top network layer was removed and repurposed with my data.

my goal here is to generate googledream-like, images (or any other method for that matter) from (either one of) these newly created models.

An example of what I want to achive (model trained for the face): 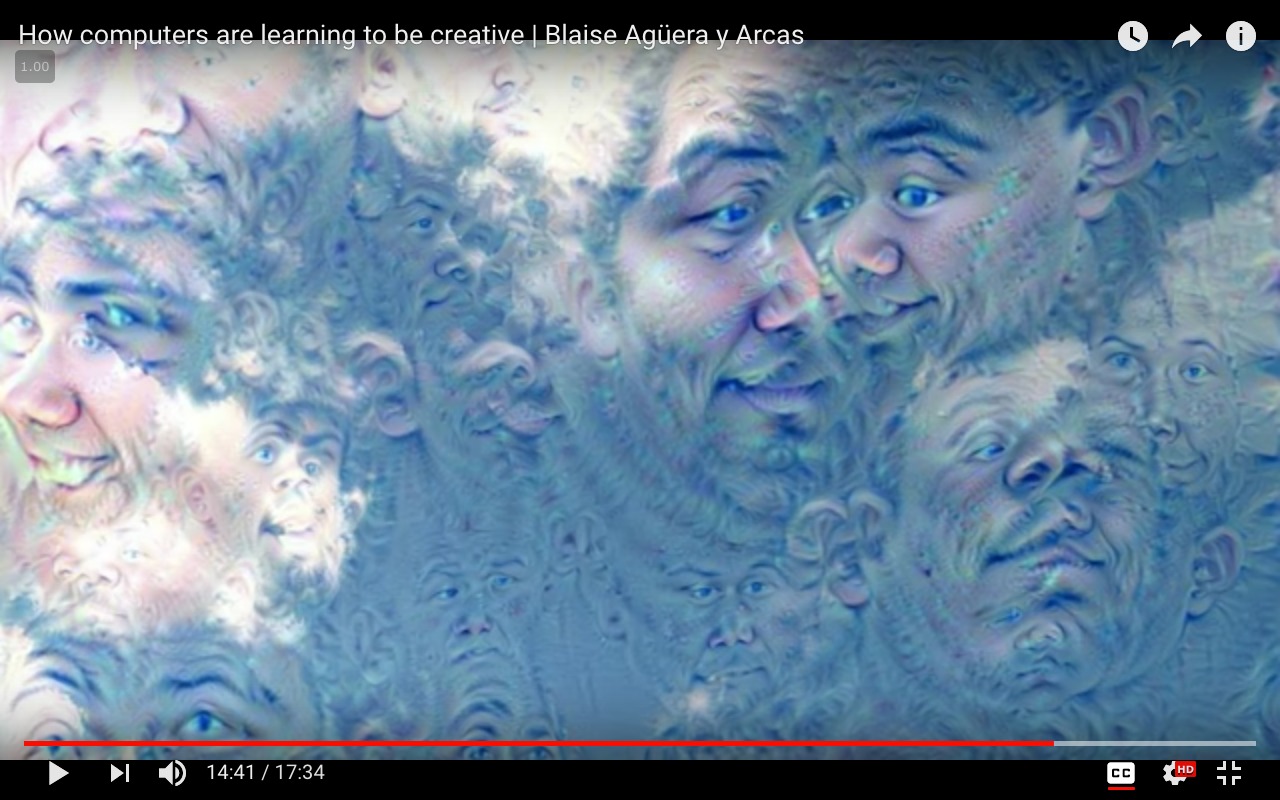 that is, knowing the class (y) and knowing my custom parameters (W), solve the model for X, and generate the image, instead of classifying it:

could someone please point me in the right direction and tell me how I could use these models for that purpose?

For example, you could start with a random noise image, and compute the gradient of the activation of class Cat with respect to the input features. Now you add this gradient (multiplied by a suitable step size) to the input image, so that activation is increased. We call this process gradient ascent, because we're trying to maximize the loss (activation) instead than minimizing it as we do with (stochastic) gradient descent. This approach by itself doesn't work very well: it results in images which are basically high-frequency, apparently random patterns, which look nothing like a cat (see for example here). However, if we add some statistical constraints which are usually satisfied by natural images, such as the fact that neighboring pixels are strongly correlated, the results are better.

However, this still doesn't result in very "dreamy" images. Deep Dream uses a different approach: we don't select any class, and we don't start from a random noise image. Instead, we choose one of the neural network layers, and we give the neural network an input image. This time our loss is the mean of the layer output (before applying the ReLu nonlinearity, usually, because otherwise gradients for features with negative initial activations will be zero). Correspondingly, the gradient is the gradient of this mean activation with respect to the input features (the pixel values of the input images). Now gradient ascent will enhances whatever features increase the most the mean layer activation the most. In other words, it enhances the features detected by that layer. This results in "applying a theme" to your input image, where the theme depends from the selected layer. Each layer of the network deals with features at a different level of abstraction, so the complexity of features we generate depends on which layer we choose to enhance. For example, lower layers tend to produce strokes or simple ornament-like patterns, because those layers are sensitive to basic features such as edges and their orientations.

The algorithm is usually applied in an iterative fashion, first downscaling the input image to a minimum size (image shape, i.e., number of pixels in the vertical & horizontal direction), then applying gradient ascent, then upscaling to a successive size, until we get back to the original image size. The successive scales are called octaves. The DeepDream algorithm was originally implemented in Caffe, so it's useless for most practitioners today. Luckily, there are modern implementations in Keras and Tensorflow:

https://github.com/keras-team/keras/blob/master/examples/deep_dream.py (classic Keras implementation: only works with Inception v3, you need to modify the code manually to get it to work with other networks)

https://github.com/danielvarga/keras-deep-dream (slightly more general Keras implementation: the neural network model and the layer name can be passed to the script as CL arguments, without having to manually modify the code)

https://github.com/tensorflow/tensorflow/blob/master/tensorflow/examples/tutorials/deepdream/deepdream.ipynb (Tensorflow implementation, it uses the Inception architecture but I'm not sure which version)

DeepDream has no network architecture. It is just slicing through the different layers of a deep network to extract out different visualization possible.

An implementation is shown below:

Essentially different layers in network architecture (which ever it is, can be different types of convolution network etc) is extracted and rendered.

Not the answer you're looking for? Browse other questions tagged conv-neural-network transfer-learning or ask your own question.

0
Convolutional neural network and Transfer Learning
4
Fine Tuning vs. Transferlearning vs. Learning from scratch
2
Is it reasonable to use VGG16 with a new fully-connected layer for binary image segmentation?
4
How to Fine Tune a pre-trained network
0
Slower training after transfer learning
0
Add input features for transfer learning? (Not for CNN)