Im new to Stack exchange, and a student of statistics. Thus I have a question for you guys....

So my questions is asking if it is possible to check the distribution of a random sample comes from a poisson distribution by plotting the mean and the variance of the a distribution.

This is what the code I get for it?

And then I notice that the plot(x,y) is pretty much a straight line. So I can conclude that it is a poission distribution. Somehow this just seems wrong though, please let me know what you think?

There are three issues here:

Many answers to #3 have appeared elsewhere on our site, so I will focus on the first two issues.

What the simulation does

The lines of code

draw $100$ iid values from a Poisson distribution with mean $5$ and then randomly obtain $10$ of those values (without replacement). Iterating the second command is a form of resampling analysis. It does not really test what happens when data are repeatedly drawn from the same underlying Poisson distribution; instead, it explores the distribution of the $100$ values obtained in the first line, which are fixed for the duration of the simulation.

To study a Poisson distribution, we need to draw repeated independent samples from it:

At this point sim is a matrix with two rows: one for the means, the next for the variances. Each column summarizes a separate simulation (ergo, there are $10000$ columns in this example).

What the analysis does

Here it is in a compact form:

This creates an array of percentiles of the two rows of output, thereby tracing out their distributions. A plot is illuminating: 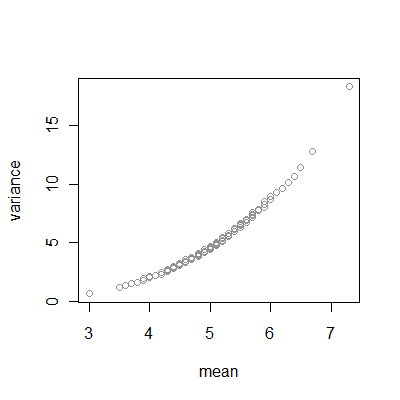 The curve isn't really straight, as we can find by regressing the y values on the x values with a quadratic term included: 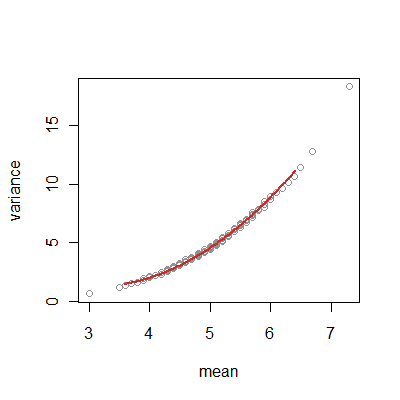 The quadratic term is highly significant and has a large coefficient:

I encourage interested readers to play with the parameters (mu, n, and n.trials) to see how things (don't) change. Consider also changing rpois in the simulation to something else (such as rnorm). 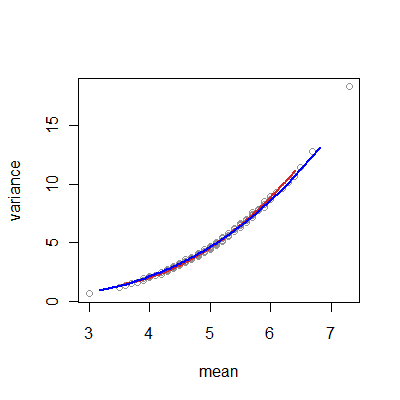 Even for this fairly small mean ($5$) and modest sample size ($10$), the fit is extraordinarily good. Unfortunately, this shows that we should expect a similar-looking plot for almost any moderate sample size for many different underlying distributions, thereby demonstrating that this plot tells us little or nothing that is useful concerning whether the data come from a Poisson distribution.

What can we do instead?

"Checking" whether a distribution has a particular shape can be improved by indicating the ways in which the data might depart from that shape.

In such a setting, we can fit the negative binomial parameters (using maximum likelihood, for instance) and test whether the "non-Poissonness" parameter differs significantly from a value corresponding to a Poisson distribution. In the interest of space, and to keep this reply reasonably elementary, I will not pursue this option here.

Less formally, we can simply apply a Poisson generalized linear model and look at its diagnostics:

The residual Q-Q plot for the Poisson data is almost linear, whereas that of the negative binomial data has some pronounced extremes 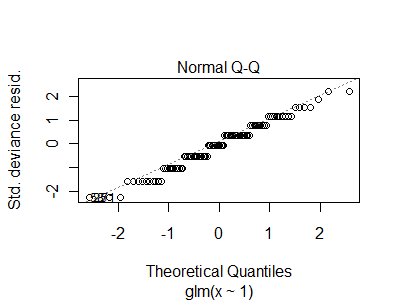 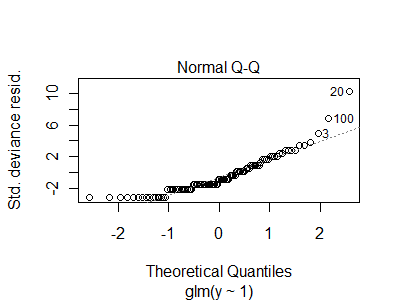 As one can see, it takes a moderate sample size to detect these differences, but at least they do show up.

Not the answer you're looking for? Browse other questions tagged r distributions data-visualization poisson-distribution or ask your own question.

42
How can I test if given samples are taken from a Poisson distribution?
0
Comparing several Poisson Models