What is Connectionist Temporal Classification (CTC)?

I'm looking to do an optical character recognition (OCR) project. After doing some research I've come across an architecture that seems interesting: CNN+RNN+CTC. I'm familiar with convoluted neural networks (CNN), and recurrent neural networks (RNN), but what is Connectionist Temporal Classification (CTC)? I'd like an explanation in layman's terms.

You have a dataset containing:

A Neural Network (NN) outputs a score for each possible horizontal position (often called time-step t in the literature) of the image. This looks something like this for a image with width 2 (t0, t1) and 2 possible characters ("a", "b"):

To train such a NN, you must specify for each image where a character of the ground truth text is positioned in the image. As an example, think of an image containing the text "Hello". You must now specify where the "H" starts and ends (e.g. "H" starts at the 10th pixel and goes until the 25th pixel). The same for "e", "l, ... That sounds boring and is a hard work for large datasets.

Even if you managed to annotate a complete dataset in this way, there is another problem. The NN outputs the scores for each character at each time-step, see the table I've shown above for a toy example. We could now take the most likely character per time-step, this is "b" and "a" in the toy example. Now think of a larger text, e.g. "Hello". If the writer has a writing style which uses much space in horizontal position, each character would occupy multiple time-steps. Taking the most probable character per time-step, this could give us a text like "HHHHHHHHeeeellllllllloooo". How should we transform this text into the correct output? Remove each duplicate character? This yields "Helo", which is not correct. So, we would need some clever postprocessing.

How is this achieved?

To illustrate this, have a look at the following image. It is in the context of speech recognition, however, text recognition is just the same. Decoding yields the same text for both speakers, even though alignment and position of the character differs. 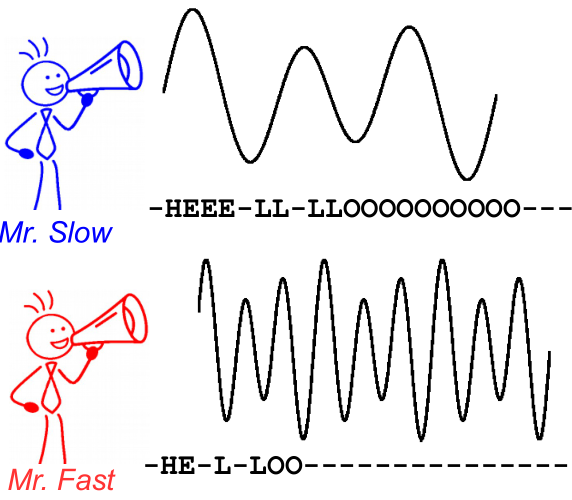 Not the answer you're looking for? Browse other questions tagged machine-learning deep-learning conv-neural-network rnn or ask your own question.