Is a "hurdle model" really one model? Or just two separate, sequential models?

In this case, I have count data with 69 zeros and 31 positive counts. Nevermind for the moment that this is, by definition of the data-generation procedure, a Poisson process, because my question is about hurdle models.

Let's say I want to handle these excess zeros by a hurdle model. From my reading about them, it seemed like hurdle models aren't actual models per se—they are just doing two different analyses sequentially. First, a logistic regression predicting whether or not the value is positive versus zero. Second, a zero-truncated Poisson regression with only including the non-zero cases. This second step felt wrong to me because it is (a) throwing away perfectly good data, which (b) could lead to power issues since much of the data are zeros, and (c) basically not a "model" in and of itself, but just sequentially running two different models.

So I tried a "hurdle model" versus just running the logistic and zero-truncated Poisson regression separately. They gave me identical answers (I'm abbreviating the output, for brevity's sake):

This seems off to me since many different mathematical representations of the model include the probability that an observation is non-zero in the estimation of positive count cases, but the models I ran above completely ignore one another. For example, this is from Chapter 5, page 128 of Smithson & Merkle's Generalized Linear Models for Categorical and Continuous Limited Dependent Variables:

By doing the two models completely separate from one another—which seems to be what hurdle models do—I don't see how $\hat{\pi}$ is incorporated into the prediction of positive count cases. But based on how I was able to replicate the hurdle function by just running two different models, I don't see how $\text{logit}^{-1}(z\hat{\gamma})$ plays a role in the truncated Poisson regression at all.

Am I understanding hurdle models correctly? They seem two be just running two sequential models: First, a logistic; Second, a Poisson, completely ignoring cases where $y = 0$. I would appreciate if someone could clear-up my confusion with the $\hat{\pi}$ business.

If I am correct that that is what hurdle models are, what is the definition of a "hurdle" model, more generally? Imagine two different scenarios:

Would it be safe to call both of these situations "hurdle" models, even if I estimate them with two sequential models (logistic and then beta in the first case, logistic and then Tobit in the second)?

It is correct that most hurdle models can be estimated separately (I would say, instead of sequentially). The reason is that the log-likelihood can be decomposed into two parts that can be maximized separately. This is because $\hat \pi$ is a just a scaling factor in (5.34) that becomes an additive term in the log-likelihood.

Then it becomes obvious that $\ell_1(\gamma)$ (binary logit model) and $\ell_2(\beta)$ (zero-truncated Poisson model) can be maximized separately, leading to the same parameter estimates, covariances, etc. as in the case where they are maximized jointly.

The same logic also works if the zero hurdle probability $\pi$ is not parametrized through a logit model but any other binary regression model, e.g., a count distribution right-censored at 1. And, of course, $f(\cdot)$ could also be another count distribution, e.g., negative binomial. The whole separation only breaks down if there are shared parameters between the zero hurdle and the truncated count part.

A prominent example would be if negative binomial distributions with separate $\mu$ but common $\theta$ parameters are employed in the two components of the model. (This is available in hurdle(..., separate = FALSE, dist = "negbin", zero.dist = "negbin") in the countreg package from R-Forge, the successor to the pscl implementation.)

(a) Throwing away perfectly good data: In your case yes, in general no. You have data from a single Poisson model without excess zeros (albeit many zeros). Hence, it is not necessary to estimate separate models for the zeros and non-zeros. However, if the two parts are really driven by different parameters then it is necessary to account for this.

(b) Could lead to power issues since much of the data are zeros: Not necessarily. Here, you have a third of the observations that are "successes" (hurdle crossings). This wouldn't be considered very extreme in a binary regression model. (Of course, if it is unnecessary to estimate separate models you would gain power.)

(c) Basically not a 'model' in and of itself, but just sequentially running two different models: This is more philosophical and I won't try to give "one" answer. Instead, I will point out pragmatic points of view. For model estimation, it can be convenient to emphasize that the models are separate because - as you show - you might not need a dedicated function for the estimation. For model application, e.g., for predictions or residuals etc., it can be more convenient to see this as a single model.

(d) Would it be safe to call both of these situations 'hurdle' models: In principle yes. However, jargon may vary across communities. For example, the zero-hurdle beta regression is more commonly (and very confusingly) called zero-inflated beta regression. Personally, I find the latter very misleading because the beta distribution has no zeros that could be inflated - but it's the standard term in the literature anyway. Moreover, the tobit model is a censored model and hence not a hurdle model. It could be extended, though, by a probit (or logit) model plus a truncated normal model. In the econometrics literature this is known as the Cragg two-part model.

The countreg package on R-Forge at https://R-Forge.R-project.org/R/?group_id=522 is the successor implementation to hurdle()/zeroinfl() from pscl. The main reason that it is (still) not on CRAN is that we want to revise the predict() interface, possibly in a way that is not fully backward compatible. Otherwise the implementation is pretty stable. Compared to pscl it comes with a few nice features, e.g.:

Your simulated data comes from a single Poisson process. If e is treated as a known regressor then it would be a standard Poisson GLM. If e is an unknown noise component, then there is some unobserved heterogeneity causing a little bit of overdispersion which could be captured by a negative binomial model or some other kind of continuous mixture or random effect etc. However, as the effect of e is rather small here, none of this makes a big difference. Below, I'm treating e as a regressor (i.e., with true coefficient of 1) but you could also omit this and use negative binomial or Poisson models. Qualitatively, all of these lead to similar insights.

This reflects that all three models can consistently estimate the true parameters. Looking at the corresponding standard errors shows that in this scenario (without the need for a hurdle part) the Poisson GLM is more efficient:

Standard information criteria would select the true Poisson GLM as the best model:

And a Wald test would correctly detect that the two components of the hurdle model are not significantly different:

Finally both rootogram(p) and qqrplot(p) show that the Poisson GLM fits the data very well and that there are no excess zeros or hints on further misspecifications. 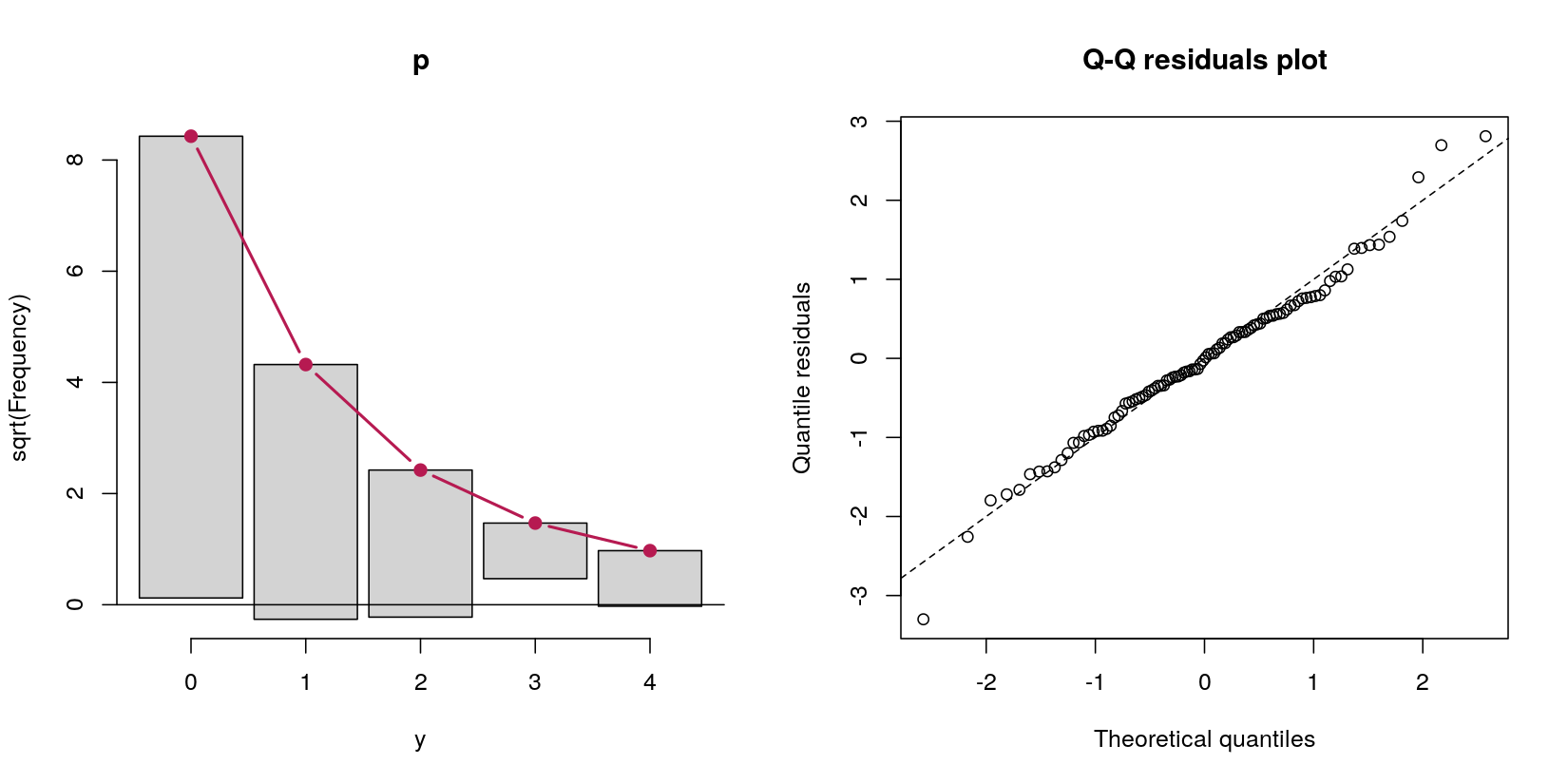 Regarding the philosophical aspect, "when should we consider something a single model and when two separate models", it may be interesting to note that the sample estimates of the model-parameters are correlated.

So I would say that you should not consider it as two separate models. Or at least there is some relation even when in practice you can compute the two estimates independent from each other. 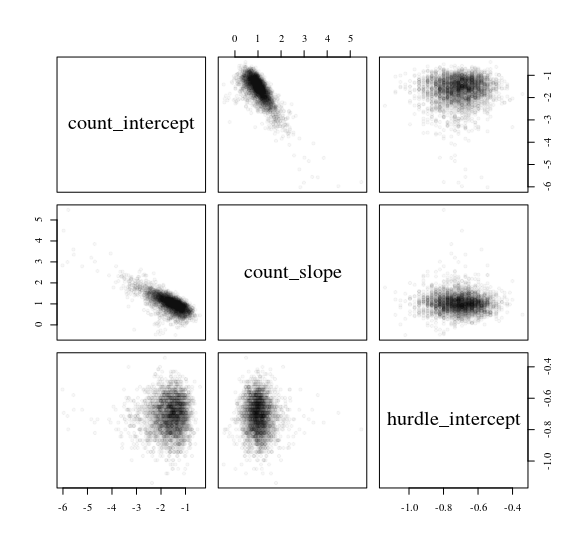 It doesn't make much sense that there is a correlation between the two parts. But it might probably be due to discrete levels of the estimates for the parameters in the Poisson model, and how these relate to the number of zero's.

Not the answer you're looking for? Browse other questions tagged r count-data zero-inflation or ask your own question.

103
What is the difference between zero-inflated and hurdle models?
4
Two-part model ordinal data
2
hurdle model with non-zero gaussian distribution in R
3
Classification followed by regression?
2
Calculate the difference in sums (revenue) between two groups in A/B test
2
Do zero-inflated models induce selection bias?
2
Model for semicontinuous data with structural and sampling (true and false) zeros
1
Combing logit and linear regression