First, a little bit of background. A predictor $P$ to forecast the next step of a time-series $\lbrace A_i\rbrace$ is a function that typically depends on two things, the time-series past states, but also the predictor's past states:

If we want to adjust/train our system to obtain a good $P$, then we'll need enough data. Sometimes available data won't be enough, so we consider doing data augmentation.

Then, instead of minimizing the loss function only over $\lbrace A_i \rbrace$, we do that also over $\lbrace B_i \rbrace$. So, if the optimization process takes $m$ steps, we have to "initialize" the predictor $2m$ times, and we'll compute approximately $2m(n-1)$ predictor internal states.

Of course, there is less computational work here (although the algorithm is a little bit uglier), but it does not matter for now.

The problem is: from a statistical point of view, which is the the "best" option? And why?

A first method that is inspired from the computer vision community [8,10] consists in extracting slices from time series and performing classification at the slice level. This method has been introduced for time series in [6]. At training, each slice extracted from a time series of class y is assigned the same class and a classifier is learned using the slices. The size of the slice is a parameter of this method. At test time, each slice from a test time series is classified using the learned classifier and a majority vote is performed to decide a predicted label. This method is referred to as window slicing (WS) in the following.

The last data augmentation technique we use is more time-series specific. It consists in warping a randomly selected slice of a time series by speeding it up or down, as shown in Fig. 2. The size of the original slice is a parameter of this method. Fig. 2 shows a time series from the “ECG200” dataset and corresponding transformed data. Note that this method generates input time series of different lengths. To deal with this issue, we perform window slicing on transformed time series for all to have equal length. In this paper, we only consider warping ratios equal to 0.5 or 2, but other ratios could be used and the optimal ratio could even be fine tuned through cross-validation on the training set. In the following, this method will be referred to as window warping (WW).

The authors kept 90% of the series unchanged (i.e. WS was set to a 90% slice and for WW 10% of the series were warped). The methods are reported to reduce classification error on several types of (time) series data, except on 1D representations of image outlines. The authors took their data from here: http://timeseriesclassification.com

How to weight the synthetic data in the training set?

In image augmentation, since the augmentation isn't expected to change the class of an image, it's afaik common to weight it as any real data. Time series forecasting (and even time series classification) might be different:

I have recently implemented another approach inspired by this paper from Bergmeir, Hyndman and Benitez.

The idea is to take a time series and first apply a transformation such as the Box Cox transformation or Yeo-johnson (which solves some problems with the Box Cox) to stabilise the variance of the series, then applying an STL decomposition on the transformed series for seasonal series or a loess decomposition to get the residuals of the series. Taking these residuals and bootstrapping them with a moving block bootstrap to generate $B$ additional series. These $B$ additional series then have the initial trend and seasonality of the starting series added back to the bootstrapped residuals before lastly inverting the power transform applied in the first step.

In this way as many additional time series as needed can be generated that represent the initial time series quite well. Here is an example of the application on some real data to generate additional similar time series:

Here the augmentation is shown using a Yeo-johnson transformation and not Box Cox as suggested in the original paper.

Another answer with a different approach, based on "Dataset Augmentation in Feature Space" by DeVries and Taylor.

In this work, we demonstrate that extrapolating between samples in feature space can be used to augment datasets and improve the performance of supervised learning algorithms. The main benefit of our approach is that it is domain-independent, requiring no specialized knowledge, and can therefore be applied to many different types of problems.

Sounds promising to me. In principle you can take any autoencoder to create representations in the feature space. These features can be interpolated or extrapolated.

The figure below shows as an example interpolation of two feature space vectors $C_j$ and $C_k$ (be aware that more positive results are reported for extrapolating from two vectors, see the paper for details). The resulting augmented vector $C'$ is then decoded back to the input space and fed into the network for training.

The paper again covers only sequence classification. But again IMO the principles are the same for regression analysis. You get new data from presumably the same distribution as your real data, that's what you want. 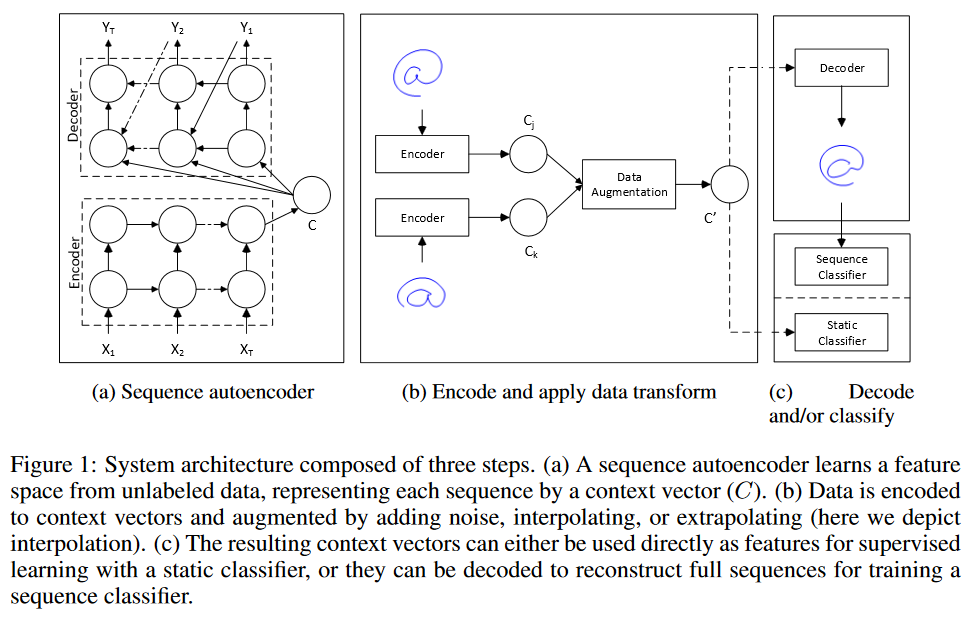 If we elaborate this principle of data generation by a neural network further, we'll end up with Generative Adversarial Networks (GAN). They could be used in a similar fashion to generate augmented data which will probably be the most sophisticated state-of-the-art way to do so.

0
What is the equivalent of image augmentation in time series forecasting? I'm in need for more data
2
Can upsampling be used as time-series data augmentation?

19
Why are Gaussian Processes valid statistical models for time series forecasting?
2
Can upsampling be used as time-series data augmentation?