Note: I edited this question on 1/1/2018 because of the comments on the original question. So some comments relate to the earlier version. It is closed as duplicaten but I dusagree with that

By symmetry I would say that (is this correct?) 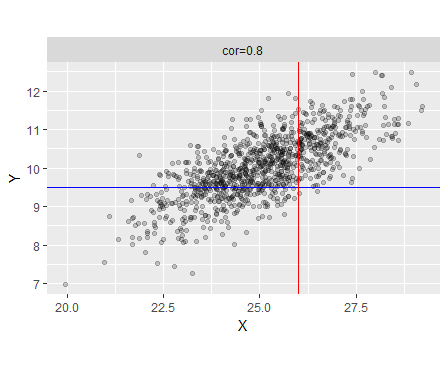 The contours of constant density for a bi-variate normal distribution are (rotated) ellipses.

Note that the rotation angle of the prinicipal axis wrt to the $x$-axis depends on the correlation $\rho$ (so, as opposed to what @whuber says in his comments below) correlation is the relevant topic here. Because, as argued by @MichaelHardy, there are values for $\rho$ where these lines correspond to these principal axis.

My question is whether the two lines of the conditional means correspond to (one of) the principal axes of these ellipses and if not how this can be explained geometrically.

Note: this question is not answered by the answer of @DilipSarwate here (and which I fully agree with) : Effect of switching response and explanatory variable in simple linear regression because he is using OLS (so regression techniques). The above formula are a theoretical property of the bivariate (multivariate) normal distribitions namely that all conditional distributions of it are also normal (see http://athenasc.com/Bivariate-Normal.pdf), there is no need for referring to regression of OLS to show that.

Your argument from symmetry is correct.

They do not represent the same line.

That can be seen by looking at $y = mx+b$ and solving for $x,$ getting $x= \frac 1 m y - \frac b m,$ and seeing that the coefficient of $x$ in the first equation and that of $y$ in the second are each other's reciprocals. But $\rho\sigma_X/\sigma_Y$ and $\rho\sigma_Y/\sigma_X$ are not reciprocals of each other.

To see why you ought to expect two different lines, consider the case in which $\rho=0.$ Then $X$ and $Y$ are uncorrelated. Thus the estimated expected value of $Y$ given $X=x$ should not depend on $x,$ and so the line is $y = \mu_X,$ a horizontal line. But similarly you'd get the line $X=\mu_Y,$ a vertical line if the $y$-axis is vertical, to estimate the average value of $X$ given $Y=y.$ Clearly two different lines. Then consider what you should expect if $\rho = 0.01,$ etc.

This has a seemingly paradoxical result: If you find the estimated average $y$-value for a given $x$-value, and then find the estimated average $x$-value of that $y$-value, then you don't return to where you started, but instead get something closer to the average $x$-value. For example, suppose you want to estimate an athlete's performance next week given his performance today. If he performs unusually well or unusually badly today, then this says he will be closer to average performance next week than he is today. But if they're always moving toward the average, how is it that we don't see them all near the average after some time has passed? The answer is that although most of the ones whose performance is far from the average today are closer to average next week, there will be some others whose performance diverges from the average then.

54
Effect of switching response and explanatory variable in simple linear regression
57
What is the intuition behind conditional Gaussian distributions?
2
What is the variance of a binomial distribution with -1 and 1?