What are “residual connections” in RNNs?

Our LSTM RNNs have $8$ layers, with residual connections between layers ...

Ideally, I am looking for a simple and intuitive explanation first, possibly accompanied by schematic representations.

The details can, of course, be found in the original papers, but I thought this question(s) would be beneficial to the community.

Skip connections form conceptually a 'bus' which flows right the way through the network, and in reverse, the gradients can flow backwards along it too.

Each 'block' of network layers, such as conv layers, poolings, etc, taps the values at a point along the bus, and then adds/subtracts values onto the bus. This means that the blocks do affect the gradients, and conversely, affect the forward output values too. However, there is a direct connection through the network.

Actually, resnets ('residual networks') are not entirely well understood yet. They clearly work empirically. Some papers show they are like an ensemble of shallower networks. There are various theories :) Which are not necessarily self-contradictory. But either way, an explanation of exactly why they work is outside the scope of a Cross Validated question, being an open research question :)

I made a diagram of how I see resnets in my head, in an earlier answer, at Gradient backpropagation through ResNet skip connections . Here is the diagram I made, reproduced: 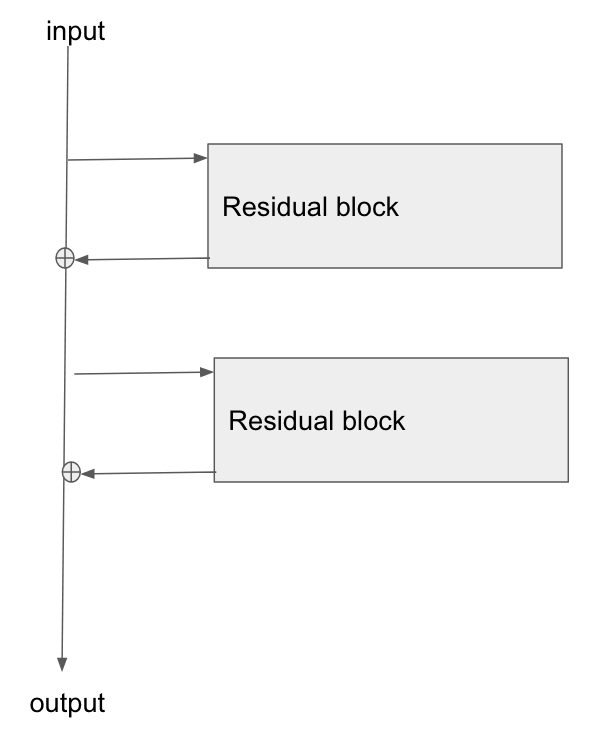 I understood the main concept, but how are these residual connections usually implemented? They remind me of how an LSTM unit works.

So, imagine a network where at each layer you have two conv blocks, in parallel: - the input goes into each block - the outputs are summed

Now, replace one of those blocks with a direct connection. An identity block if you like, or no block at all. That's a residual/skip connection.

In practice, the remaining conv unit would probably be two units in series, with an activation layer in between.

For better and deeper understanding of the Residual Connection concept, you may want to also read this paper: Deep Residual Learning for Image Recognition. This is the same paper that is also referenced by "Attention Is All You Need" paper when explaining encoder element in the Transformers architecture.

Because x and y have a high correlation -> y is a higher resolution representation of x, you can add a skip connection from your input to the output of your last layer. That would mean, all the stuff happening in the network will only focus of learning y-x. Because at the end, x is added to the output.

8
Learning initial state in RNNs
0
What are the correct training batches, given a sequence length of RNNs?
1
Back Propagation in RNNs
3
Feedforward Nets, RNNs, and LSTMs Theory
2
How do RNNs used in Machine Translation have the right output length?
1
Are RNNs Markovian?
0
Teacher Forcing in RNNs