Is this a nested logit when my regression equations are similar to that of a multinomial regression?

Let the mode of transport be a categorical random variable with three categories, representing Car, Bus and Train respectively. The goal is to predict for the $n$-th person, what mode of transport they use to commute to work. 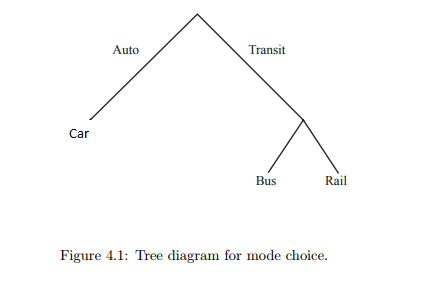 My question is whether this model is a useful discrete choice model for the question at hand, as it doesn't seem like it is a nested logit (GEV) model, nor does it seem like a multinomial regression model. It doesn't seem like a GEV model for the following reasons. Following Chapter 4.2 of Train, linking my first equation for the "upper" model to the "lower" model seems to require $\lambda$, a parameter for the cumulative GEV distribution (Equation 4.1, reproduced below), to be set to zero, which does not seem to make sense:

It also is not a multinomial logit as the relationship between the covariates and the predicted probabilities are different, when covariates are shared, i.e. $x_{0j} = x_{1j}, \forall j$. My first equation is subtly different to the one given by multinomial logistic regression, when assuming that Train is the reference class:

In contrast, with multinomial logit one obtains:

If you are using maximum likelihood and are performing no model selection, they are equivalent modeling strategies. However, in most other settings the multinomial model is considerably more constrained. For instance, if you include the effects of various covariates (income/work schedule/residential setting/etc.) the multinomial model requires each parameter to predict each multinomial outcome, however the hierarchical model can use non-overlapping subsets of the candidate predictors in each step leading to considerably sparser model.

Not the answer you're looking for? Browse other questions tagged regression multinomial-logit choice or ask your own question.

102
What is the difference between zero-inflated and hurdle models?