Is the linearity assumption in linear regression merely a definition of $\epsilon$?

I am revising linear regression.

The textbook by Greene states:

Now, of course there will be other assumptions on the linear regression model, such as $E(\epsilon|X)=0$. This assumption combined with the linearity assumption (which in effect defines $\epsilon$), puts structure on the model.

Therefore I am wondering:

Edit: since there seems to be some confusion around the other assumptions, let me add the full set of assumptions here: 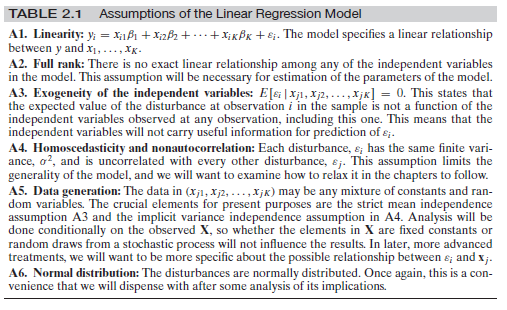 This is from Greene, Econometric Analysis, 7th ed. p. 16.

In a sense, yes and no. In the one hand, yes, given current modern causality research he is sloppy, but just like most econometrics textbooks are, in the sense that they do not make a clear distinction of causal and observational quantities, leading to common confusions like this very question. But, in the other hand, no, this assumption is not sloppy in the sense that it is indeed different from simply assuming $E(y|X)=X\beta$.

where $\beta' = \beta + \delta$. Moreover, we can write $y = \beta'x + \epsilon'$ and we would have $E[\epsilon'|x] = 0$. This shows we can have a correctly specified linear conditional expectation $E[y|x]$ which by definition is going to have an orthogonal disturbance, yet the structural equation would be nonlinear.

Your statement here goes into the main problem of causal inference in general! As shown in the simple example above, we can cook up structural disturbances that could make the conditional expectation of $y$ given $x$ linear. In general, several different structural (causal) models can have the same observational distribution, you can even have causation without observed association. Therefore, in this sense, you are correct --- we need more assumptions on $\epsilon$ in order to put "more structure" into the problem and identify the structural parameters $\beta$ with observational data.

It's worth mentioning most econometrics textbooks are confusing when it comes to the distinction between regression and structural equations and their meaning. This has been documented lately. You can check a paper by Chen and Pearl here as well as an extended survey by Chris Auld. Greene is one of the books examined.

edited after comments by OP and Matthew Drury

To answer this question I assume Greene, and OP, have the following definition of linearity in mind: Linearity means that for every one unit increase in this predictor, the outcome is increased by beta ($β$), wherever on the range of possible predictor values this one-unit increase occurs. I.e. the function $y=f(x)$ is $y=a+bx$ and not e.g. $y=a+bx^2$ or $y=a+sin(x)$. Further, this assumption is focused on the betas and thus applies to predictors (aka independent variables).

The expectation of residuals conditional on the model $E(ϵ|X)$ is something else. Yes, it is true that the math behind a linear regression defines/tries to define $E(ϵ|X)=0$. However, this is usually set over the entire range of fitted/predicted values for $y$. If you look at specific parts of the linear predictor and the predicted value of $y$, you might notice heteroscedasticity (areas where the variation of $ϵ$ is larger than elsewhere), or areas where $E(ϵ|X)≠0$. A non-linear association between the $x$'s and $y$ might be the cause for this, but is not the only reason heteroscedasticity or $E(ϵ|X)≠0$ might occur (see for example missing predictor bias).

From the comments: OP states "the linearity assumption does not restrict the model in any way, given that epsilon is arbitrary and can be any function of XX whatsoever", to which I would agree. I think this is made clear by linear regressions being able to fit to any data, whether or not the linearity assumption is violated or not. I'm speculating here, but that might be the reason why Greene chose to keep the error $ϵ$ in the formula - saving the $E(ϵ|X)=0$ for later - to denote that in assuming linearity, $y$ (and not the expected $y$) can be defined based on $X$ but maintains some error $ϵ$, regardless of what values $ϵ$ takes. I can only hope that he would later go on to state the relevancy of $E(ϵ|X)=0$.

In short (admittedly, without fully reading Greene's book and checking his argumentation):

I was a little confused by the answer above, hence I'll give it another shot. I think the question is not actually about 'classical' linear regression but about the style of that particular source. On the classical regression part:

However, the linearity assumption by itself does not put any structure on our model

That is absolutely correct. As you have stated, $\epsilon$ might as well kill the linear relation and add up something completely independent from $X$ so that we cannot compute any model at all.

Is Greene being sloppy? Should he actually have written: $E(y|X)=Xβ$

I do not want to answer the first question but let me sum up the assumptions you need for usual linear regression:

Now you can run down the usual path and compute

so that by the usual 'duality' between machine learning (minimalization of error functions) and probability theory (maximization of likelihoods) you maximize $-\log f_{Y|X}(y|x)$ in $\beta$ which in fact, gives you the usual "RMSE" stuff.

Now as stated: If the author of the book you are quoting wants to make this point (which you have to do if you ever want to be able to compute the 'best possible' regression line in the basic setup) then yes, he must make this assumption on the normalicity of the $\epsilon$ somewhere in the book.

There are different possibilities now:

However, also in a strict mathematical sense, the normal error is something canonical (the distribution with the highest entropy [once the variance is fixed], hence, producing the strongest models) so that some authors tend to skip this assumption but use in nontheless. Formally, you are absolutely right: They are using mathematics in the "wrong way". Whenever they want to come up with the equation for the density $f_{Y|X}$ as stated above then they need to know $\epsilon$ pretty well, otherwise you just have properties of it flying around in every senseful equation that you try to write down.

152
Does causation imply correlation?
101
The Book of Why by Judea Pearl: Why is he bashing statistics?
36
Introduction to causal analysis
25
Which Theories of Causality Should I know?
10
Hiding a Regression Model from Professor (Regression Battleship)
9
Recommendation: high-level comparison of formal causal reasoning approaches
8
What's the difference between "mean independent" and independent?
8
Correlation, regression and causal modeling
7
What's the DGP in causal inference?
2
Multiple Linear Regression Zero Conditional Mean Assumption
See more linked questions