Here is a hypothesis testing question I'm trying to work out but am struggling with how to draw a conclusion, maybe I'm not defining the null hypothesis correctly.

Assuming the null hypothesis to be true, I calculated the standard deviation of the population to be 0.0074.

Here is where I'm stuck -- what does this tell me? Is there something I'm doing wrong where identifying the null hypothesis?

Your hypotheses are fine.

You have a one tailed test, but you don't seem to consider whether you should be rejecting large or small proportions.

Your problem is your rejection rule! See your critical value. Does it correspond to a large proportion or a small one?

Forget the calculations and just think a little about the logic -- what does it seem should happen? If someone claims at least 68% saw a movie and your sample showed more than 68% (say 80%) would you doubt their claim? If your sample only showed 20%, would you be inclined to doubt the claim now?

So should you be rejecting for very high proportions or very low ones?

(The correct calculations simply tell you exactly where to draw the cut-off, but you should already see which side it should go on.)

It may also help to draw a diagram of a standard normal density and the normal approximation for a sample proportion when p=0.68 (i.e. at the boundary of the hypothesis space): 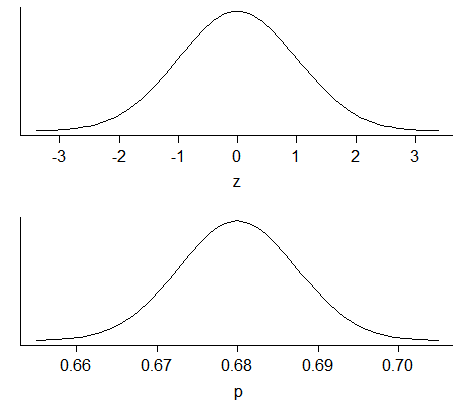 So what would be a clear indication that the claim in the null hypothesis is false? A proportion so small (so much lower than 0.68) that any proportion at least that small would be very unlikely to occur even if the true proportion was as low as 0.68 would make us suspicious of the null.

We can see that we should reject for observed proportions that are clearly below 0.68; these have negative z-values.

Not the answer you're looking for? Browse other questions tagged hypothesis-testing self-study normal-distribution binomial-distribution z-test or ask your own question.

1
Question about the logic of hypothesis testing
3
Why do I always fail to reject the null hypothesis on a binomial test for `p=.5`?
24
Now that I've rejected the null hypothesis what's next?
3
How do we perform a two-tailed z-test when we *do* know the population mean of the intervention sample?
0
How to set up an hypothesis correctly?
1
Z-test for One Population Proportion