The "check function" in quantile regression is defined as

I read the original paper by Koenker and the $u$ is not defined formally. The same goes for a few other papers I have read. The only comment I found was: "We should think of $u$ as an individual error $u=y-r$ and $ρ_τ(u)$ as the loss associated with $u$." (Arellano). What does this mean? What is $u$? Is it simply the residual?

I am aware that my question might be rather trivial, but I tried my best in finding a proper explanation and I just dont get it.

The check function stems from applying an optimization view of expressing the $\tau$-th sample quantile of a sample $\{Y_1, \ldots, Y_n\}$.

An intuitive proof of this fact can be found in Qunantile Regression (2005), Section 1.3, by Roger Koenker. In view of $(1)$, the $\tau$-th sample quantile receives a new interpretation as the minimizer of some loss function which is determined by the check function $\rho_\tau(\cdot)$. This is in agreement with more standardized results for the least-squares estimate and the least-absolute-deviation estimate, as the following chart shows: 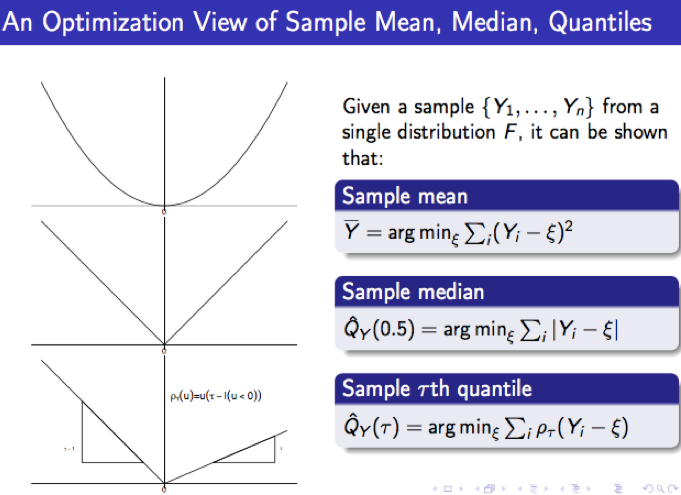 The extension from the one-sample problem above to the regression setting is straightforward, which simply replaces the $\xi$ in $(1)$ by the regression function $x'b$ (yes, the aim here is to minimize the total "loss" of residuals, where "loss" is clearly defined by the $\rho_\tau(\cdot)$:

Not the answer you're looking for? Browse other questions tagged least-squares quantile-regression or ask your own question.