how to detect the exact size of an object in an image using machine learning?

I have a problem where I get an image from an underwater camera. The image is quite large compared to the objects shown so that it contains has mostly background (seafloor). Objects in the image are for instance corals or sponges.

In the image I would like to detect the exact size (maybe in #pixels or some other measure) of one class of objects, lets say a coral across a sequence of images.

Which approach should I take here? I know there are a lot of tool out there and I would be grateful for any advice on where to start and what to try as I have mostly worked with tabular data instead of images.

Thanks a lot for your help!

This task of depth estimation is part of a hard and fundamental problem in computer vision called 3D reconstruction. Recovering metric information from images is sometimes called photogrammetry. It's hard because when you move from the real world to an image you lose information.

Specifically, the projective transformation $T$ that takes your 3D point $p$ to your 2D point $x$ via $x = Tp$ does not preserve distance. Since $T$ is a $2\times 3$ matrix, calculating $T^{-1}$ to solve $T^{-1}x= p$ is an underdetermined inverse problem. A consequence of this is that pixel lengths are not generally going to be meaningful in terms of real world distances. You can see a simple example of why doing 3D reconstruction is tricky by considering the forced perspective from the Ames room optical illusion: 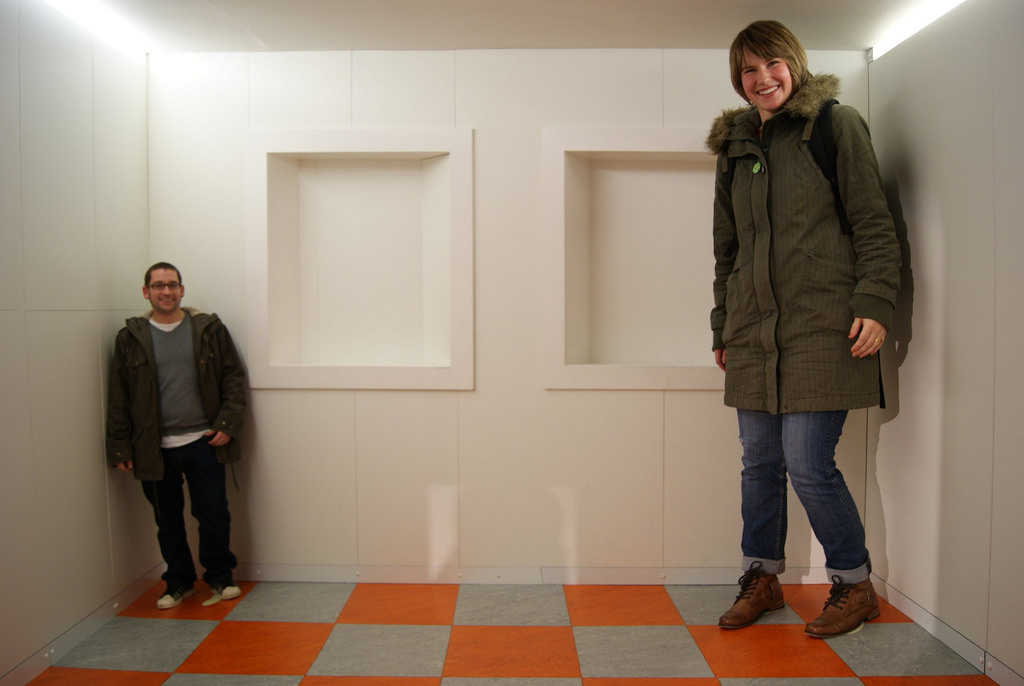 Your visual processing system and many algorithms use cues such as shading and parallel lines to estimate depth but these can be tricked. Generally you need to know the camera location, and something of a known size observable in the image. If you want really accurate length measurements from photography you have to plan for it in the data collection process (it's very helpful to include these chess boards in the camera field of view).

Here are a bunch of well studied subproblems:

Here is a nice list of papers and software on the whole topic of 3D reconstruction here. A classic reference textbook is:

This paper gives an example of doing depth estimate from a single RGB image using a CNN (the code is also available):

If you have enough labeled data, go for supervised learning with CNNs. Try object detections such as YOLO. They give you the bounding box of the object, as well as the predicted class. Some pre-trained models are also available, which in the latest version (YOLO9000!) supports around 9k classes. But not sure if your classes can be found there. Maybe use the pre-trained models and then fine-tune it with your data.

Another approach would be semantic segmentation, something like a U-net. This one will give you segmentation but it requires masks as labels. As I said, if you have the labels, there are multiple options depending on the amount of the labeled data you have, or the kind of data available.

If you have no labeled data, there are some unsupervised image segmentation methods as well. Have a look at here for example.

Not the answer you're looking for? Browse other questions tagged machine-learning image-processing object-detection or ask your own question.

35
What is the most accurate way of determining an object's color?
3
More shallow network outperformed a deeper one in accuracy?
1
What is exact 'learning' on a deep learning model?
3
Object Localisation without Classification
1
How best to combine object detection and tracking
0
Intensity normalization with segmented ROI on black background