my problem is from the following book on page 94 (http://www.development.wne.uw.edu.pl/uploads/Main/recrut_econometrics.pdf).

They say the covariance between a single dummy instrument variable (z), which is one with probability p, and the dependent variable (y) is: Cov(y,z) = (E(y I z=1) - E(y I z=0))p(1-p). They say this is easy to show, but i cant figure it out. I tried using the usual covariance formulas, but it didnt help. Does anybody know an answer?

The standard formula does work, just needs a bit of manipulation

Consider the ordinary least squares fit of $Y$ to $Z$: 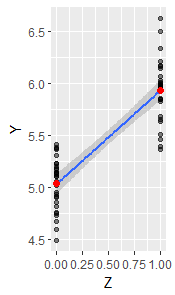 This formula holds whether the variables refer to data or to a bivariate distribution.

However, the usual formula for the slope asserts it equals the covariance of $(Z,Y)$ divided by the variance of $Z$:

When $Z$ is Bernoulli$(p)$, its variance is $p(1-p)$. Solving for the covariance in terms of the slope and the variance of $Z$ gives the stated formula:

Not the answer you're looking for? Browse other questions tagged covariance instrumental-variables bernoulli-distribution or ask your own question.

249
How would you explain covariance to someone who understands only the mean?

7
How to show operations on two random variables (each Bernoulli) are dependent but not correlated?
1
What is next after a referee rejects an instrumental variable strategy?
0
instrumental variables covariance
3
why is 2SLS with dummys the same as GLS on group means?
3
Correlation between the dependent variable and the instrument
8
Sign of Covariance and of Spearman's Rho
1
Showing 0 covariance for special form of AR(1) time series
4
Why is the correlation between independent variables/regressor and residuals zero for OLS?
0
Logit First-stage and Logit Second-Stage in Experiment with 2 binary Instrumental Variables