Statistical significance of differences between training and test

I have the following scenario: 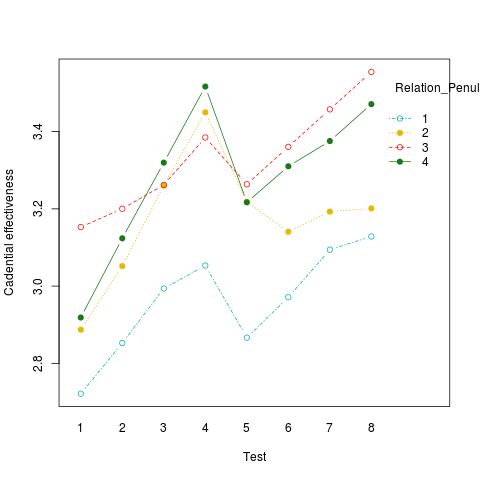 In this picture we can say 4 level of treatment through 8 tests. Tests from 1 to 4 are a training set, while tests from 5 to 8 are the actual test. I can observe that the yellow line (Relation_PenultimateLast=2) looks different in the second part of the experiment, but I have no idea what function to use to detect any statistical significance among the two slopes. Can somebody direct me towards the right function or method in R?

But now that I think about it, maybe I am approaching it in the wrong way. Probably I can run a regression analysis (like lmer()) on both sets to look for interactions between tests and Relation_PenultimateLast levels. If in one of the two sets there is an interaction, it could mean that there is a variation in the responses.

What's the best method of analysis in this case?

Browse other questions tagged r regression or ask your own question.