Are you aware of any simple real world examples such as estimating a population mean, proportion, regression, etc where researchers formally incorporate prior information? I realize Bayesians can use "non-informative" priors too, but I am particularly interested in real examples where informative priors (i.e. real prior information) are used.

Bayesian search theory is an interesting real-world application of Bayesian statistics which has been applied many times to search for lost vessels at sea. To begin, a map is divided into squares. Each square is assigned a prior probability of containing the lost vessel, based on last known position, heading, time missing, currents, etc. Additionally, each square is assigned a conditional probability of finding the vessel if it's actually in that square, based on things like water depth. These distributions are combined to prioritize map squares that have the highest likelihood of producing a positive result - it's not necessarily the most likely place for the ship to be, but the most likely place of actually finding the ship.

I think estimating production or population size from serial numbers is interesting if traditional explanatory example. Here you are trying the maximum of a discrete uniform distribution. Depending on your choice of prior then the maximum likelihood and Bayesian estimates will differ in a pretty transparent way.

Perhaps the most famous example is estimating the production rate of German tanks during the second World War from tank serial number bands and manufacturer codes done in the frequentist setting by (Ruggles and Brodie, 1947). An alternative analysis from a Bayesian point of view with informative priors has been done by (Downey, 2013), and with an improper uninformative priors by (Höhle and Held, 2004). The work by (Höhle and Held, 2004) also contains many more references to previous treatment in the literature and there is also more discussion of this problem on this site.

Höhle, Michael, and Leonhard Held. Bayesian estimation of the size of a population. No. 499. Discussion paper//Sonderforschungsbereich 386 der Ludwig-Maximilians-Universität München, 2006.

There is a nice story in Cressie & Wickle Statistics for Spatio-Temporal Data, Wiley, about the (bayesian) search of the USS Scorpion, a submarine that was lost in 1968. We tell this story to our students and have them perform a (simplified) search using a simulator.

Similar examples could be constructed around the story of the lost flight MH370; you might want to look at Davey et al., Bayesian Methods in the Search for MH370, Springer-Verlag.

Here is an example of estimating a mean, $\theta$, from Normal continuous data. Before delving directly into an example, though, I'd like to review some of the math for Normal-Normal Bayesian data models.

Or as more typically written by Bayesian,

With this notation, the density for $y_i$ is then

The posterior distribution we obtain from this Normal-Normal (after a lot of algebra) data model is another Normal distribution.

The usefulness of this Bayesian methodology comes from the fact that you obtain a distribution of $\theta | y$ rather than just an estimate since $\theta$ is viewed as a random variable rather than a fixed (unknown) value. In addition, your estimate of $\theta$ in this model is a weighted average between the empirical mean and prior information.

That said, you can now use any Normal-data textbook example to illustrate this. I'll use the data set airquality within R. Consider the problem of estimating average wind speeds (MPH). 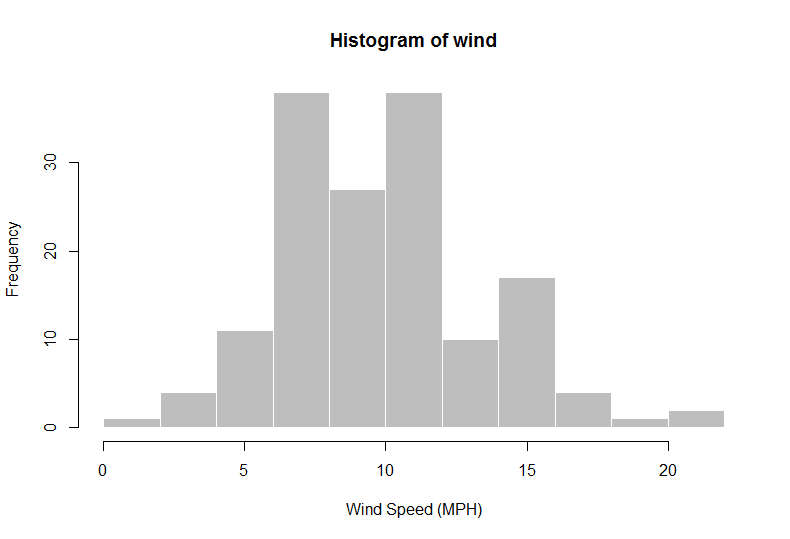 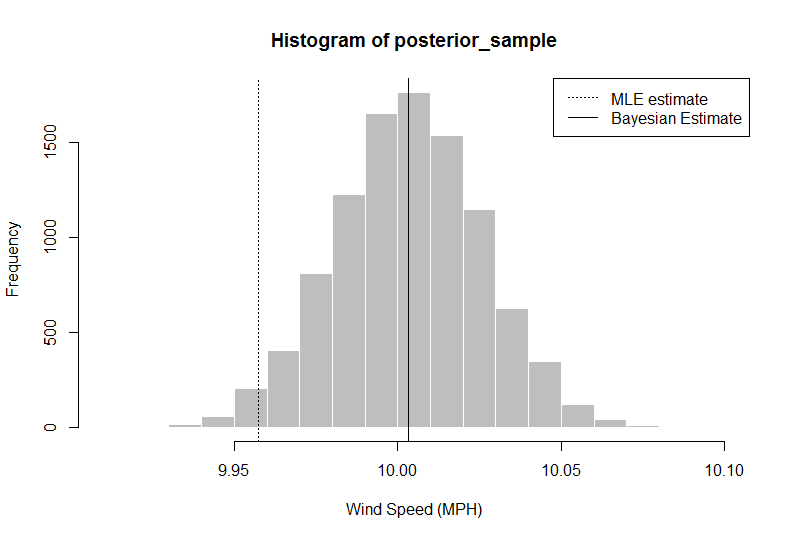 In this analysis, the researcher (you) can say that given data + prior information, your estimate of average wind, using the 50th percentile, speeds should be 10.00324, greater than simply using the average from the data. You also obtain a full distribution, from which you can extract a 95% credible interval using the 2.5 and 97.5 quantiles.

Below I include two references, I highly recommend reading Casella's short paper. It's specifically aimed at empirical Bayes methods, but explains the general Bayesian methodology for Normal models.

An area of research where I believe the Bayesian methods are absolutely necessary is that of optimal design.

In the logistic regression setting, a researcher is trying to estimate a coefficient and is actively collecting data, sometimes one data point at a time. The researcher has the ability to choose the input values of $x$. The goal is to maximize the information learned for a given sample size (alternatively, minimize the sample size required to reach some level of certainty). One can show that for a given $\beta$ there is a set of $x$ values that optimize this problem.

The catch-22 here is that to choose the optimal $x$'s, you need to know $\beta$. Clearly, you don't know $\beta$ or you wouldn't need to collect data to learn about $\beta$. You could just use the MLE's to select $x$, but

The (admittedly older) Frequentist literature deals with a lot of these issues in a very ad-hoc manner and offers sub-optimal solutions: "pick regions of $x$ that you think should lead to both 0's and 1's, take samples until the MLE is defined, and then use the MLE to choose $x$".

The Bayesian analysis is to start with a prior, find the $x$ that is most informative about $\beta$ given the current knowledge, repeat until the convergence.

Given that this is a problem that starts with no data and requires information about $\beta$ to choose $x$, I think it's undeniable that the Bayesian method is necessary; even the Frequentist methods instruct one to use prior information. The Bayesian method just does so in a much more efficient and logically justified manner.

Also, it's totally reasonable to analyze the data that comes in a Frequentist method (or ignoring the prior), but it's very hard to argue against using a Bayesian method to choose the next $x$.

I was thinking of this question lately, and I think I have an example where bayesian make sense, with the use a prior probability: the likelyhood ratio of a clinical test.

Here the prior knowledge is the probability to have a urine infection based on the clinical analysis of the potentially sick person before making the test. if the physician estimate that this probability is $p_{+} = 2/3$ based on observation, then a positive test leads the a post probability of $p_{+|test+} = 0.96$, and of $p_{+|test-} = 0.37$ if the test is negative.

131
What's wrong with XKCD's Frequentists vs. Bayesians comic?
54
How to tell the probability of failure if there were no failures?

18
Frequentism and priors
13
Which statistical software is suitable for teaching an undergraduate introductory course of statistics in social sciences?
18
Why isn't bayesian statistics more popular for statistical process control?
4
Why are weakly informative priors a good idea?
35
How are Bayesian Priors Decided in Real Life?
1
Bayesian Priors in the Real World : Regression Models vs Probability Distributions