Contextual and collective anomalies are defined as follows (source):

Contextual Anomalies. If a data instance is anomalous in a specific context (but not otherwise), then it is termed as a contextual anomaly (also referred to as conditional anomaly 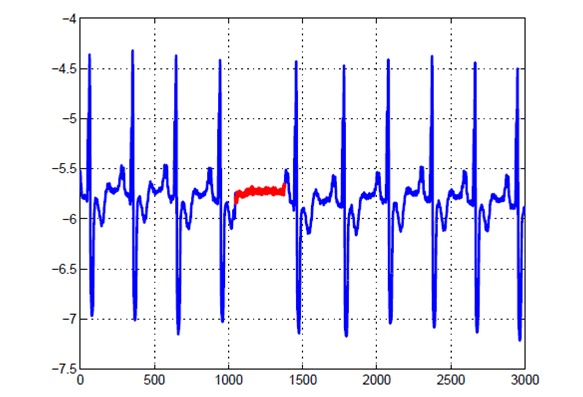 My question is, couldn't this also be seen as a set of contextual anomalies? As I see it, any data instance in the anomalous sequence is also a contextual anomaly (previous and next points are "too flat").

That ECG timeseries is just one datastream, so it might not be the clearest example. If thinking about the presence of a pattern, I would say that missing a beat is just a regular anomaly. But can also be considered a contextual anomaly, the Y value is normal, but not at that particular point in time. A collective anomaly would require monitoring multiple datastreams, like the heartbeat of multiple persons. A contextual anomaly would require we have access to a different type of data from which we can infer the context.

Let's imagine we have data of the heartbeat for many (1000) persons in a single city. BPM logged every 5 minutes for instance. The overall median BPM across all persons is say 80, and the 1% and 99% percentile say 30 and 180.

A regular anomaly would be if a persons heartbeat value was less than 30 or higher than 180. Like 20 or 230. Example of values that would be normal could be 50 (very relaxed) or 150 (exercising).

However, if the average across all 1000 people would be 150 BPM for one time interval, that is a collective anomaly. While fine individually, it is very unlikely that everyone is exercising at the same time!

And if a person has a BPM of 150 at 5 AM in the morning, that is a likely contextual anomaly. The value is fine in general, but it's very unlikely that a person is exercising in the middle of the night! Here the context is time-of-day.

Or if we have access to the state of the person, and the state == 'resting', and BPM is 150, that is also an contextual anomaly (with context being the persons state) - regardless of the time of day.

In the same paper you mentioned in your question author says right after definitions of types of anomalies:

As for the last question, contextual anomalies and collective anomalies are detected with different techniques, which are briefly described in the same paper.

Not the answer you're looking for? Browse other questions tagged self-study anomaly-detection or ask your own question.