I'm trying to understand the relationship of some ecological data I have with geographic distance. Normally, the assumption is that this particular ecological data is linearly related with distance, and the standard test used by researchers is the Mantel test. Unfortunately, that's where most people end things. I'm interested in actually understanding whether the data actually fits the linear regression like it's normally assumed to. What I want to do is similar in concept to a Mantel Correlogram, except I'm not interested in spatial autocorrelation across the data set. I want to test if the points within different classes actually fit the line as expected because I have a few different reasons to believe that they actually might not in some cases (for example, the largest distance class will have fewer distance pairs, which can result in excessive variance). I was thinking something along the lines of performing a paired t-test between the experimental and fitted data within each distance class, but I'm not sure it properly accounts for the spatial nature of the data. Does anyone have any suggestions for the appropriate test I should be using to look at each of the distance classes?

I've attached an image showing one of my datasets, with the mantel statistic (r) and corresponding p-value (p). It also shows the linear regression with slope (m) and y-intercept values (b). The (uniform) distance classes I am interested in are delineated with dashed lines, and you can see in the largest one how the data doesn't seem to fit the line. I have a few potential explanations as to why, but first I need know if it (and the data in any other distance class) deviates significantly from the line. 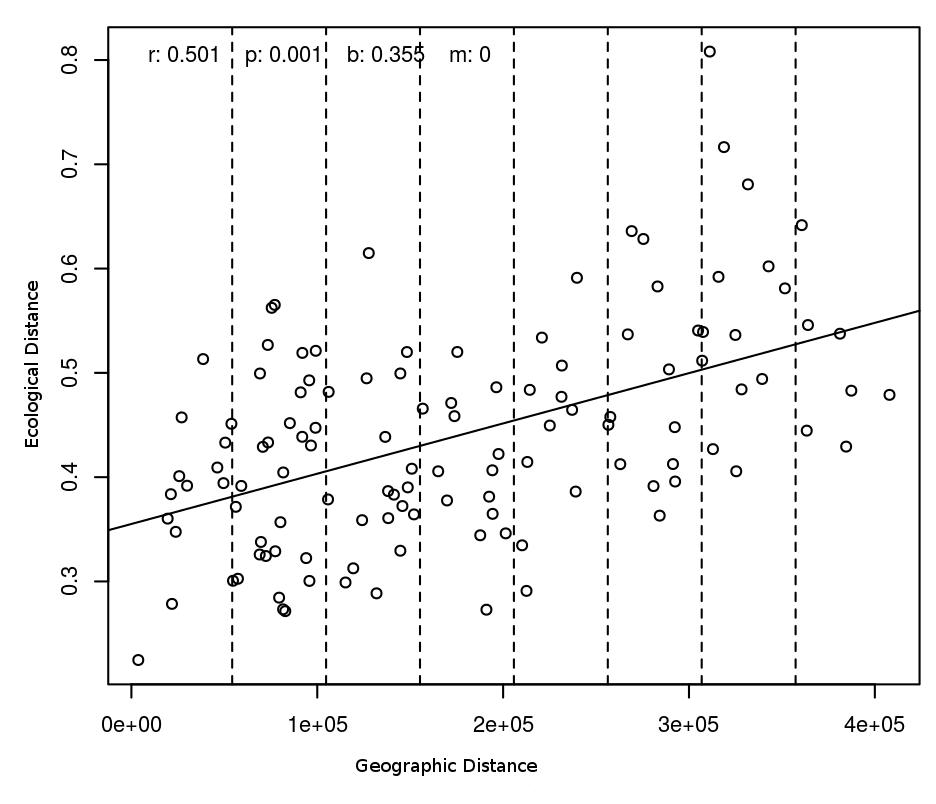 Browse other questions tagged correlation spatial linear or ask your own question.