Looking for a long-tail distribution with mean=1

I would like to generate random numbers $X$'s from a desired distribution whose properties should meet the following requirements:

In words, I was looking for a distribution whose mode or mean is around 1 and has fat tail that extends to large values. Can you suggest a distribution that satisfies these properties?

(It's possible that this is naive and no such distribution exists.)

The closest candidate came to my mind is $\chi^2$ distribution, which is controlled by the parameter $k$. However, it's either the mean is too high or the tail probability is too low. Below is an example of $\chi^2(k=3)$. Ideally I would like to move the mean to 1, and make the tail "fatter". 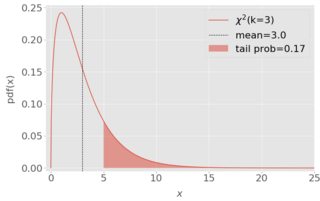 A use case would be to use this distribution as a random number generator, such that the mean of the generated numbers is around 1 while being able to generate large numbers.

Just wanted to point out that, although what @stans suggested to choose log-normal distribution with $\mu = -\sigma^2/2$ satisfies the requirement of $\mathbb{E}[X] = 1$, it doesn't create enough tail probability.

Python code to generate log-normal distribution and the corresponding $P(X>5)$:

If a condition is needed so that the range in unbounded, create a mixture where this variable is the shift for an Exponential 1 random variable.

Not the answer you're looking for? Browse other questions tagged distributions mathematical-statistics fat-tails or ask your own question.

4
Long tailed distributions for generating random numbers with parameters to control tail heaviness
2
What is the distribution family where one side is with light tail but the other side with heavy tail?
3
$P(\lvert X - \mu\rvert \geq \sigma)$ as a measure of tailedness
3
Why Pareto distribution has pointy head? How its symmetrical version looks like?
1
Is there a probability distribution similar to Poisson, but with controlled variance?
1
True mean of a truncated distribution?