The term "approximate" isn't defined very clearly. I'm assuming it means the mean, but I can't really figure out a nice way to calculate that, since the PDF of the $N$th order statistic uses CDF of the normal.

Any thoughts would be appreciated.

The distribution (asymptotic and exact) of the maximum order statistic from an iid normal sample is discussed here: Determine the limiting distribution of Standard Normal order statistics. Then the expectation can be found by numerical integration (example given there), or the asymptotic solution given there, which is a Gumbel distribution, can be used. That wikipedia page gives the expectation of a standard Gumbel variate as the Euler-Mascheroni constant $\gamma\approx 0.57721$, so with notation from the first linked page, the approximate expectation of the maximum of $n$ iid $\mathcal{N}(0,1)$ variables is $$ a_{(n)} + b_{(n)} \gamma$$.

This question was posed in a different form some years ago on math Stack Exchange, where it was asked to prove that the maximum of $n$ independent standard Normals was asymptotically equivalent to $\sqrt{2 \log n}$.

After deriving the exact distribution of the maximum order statistic, it became immediately apparent that for large $n$ (and by that I do not mean just $n = 100$, but say $n = 1,000,000$ or even a billion), the proposed asymptote was appallingly useless, and moreover that there is no meaningful approximate value for $X$. The value of $X$ does not converge to any constant for large $n$. 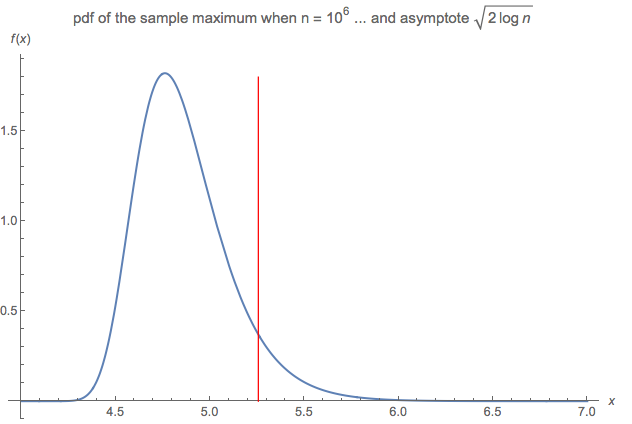 The full posting on math SE is at:

In brief, in answer to your question: there is no meaningful approximate value of $X$ for large $n$.

I think you want to look at the Fisher-Tippet Theorem which provides a CLT for the maximum, which states that the normalised maximum converges almost surely to one of three distributions (Gumbel, Frechet or Weibull)

Not the answer you're looking for? Browse other questions tagged probability order-statistics or ask your own question.