Does the normality assumption hold? Is this an outlier?

I am trying to fit a multiple linear regression (OLS) model with IPO underpricing as dependent variable. As part of my master thesis I would like to analyze the effect of venture capital certification (dummy) on IPO underpricing (raw returns - not transformed). My sample consists of 199 IPOs.

Up to now I got the following plots. However, I am concerned about the residuals at the upper end of the qq-plot. Is the assumption of normality in the residuals violated in this case? I would report robust standard errors in order to control for the observed heteroscedasticity.

Further, I am not sure how to deal with the observation at the upper right in the qq-plot (represents first-day return of 63% vs. 51% the next smaller). Could this be an outlier or may it be simply the result of a misspecified model?. The studentized residual for this particular observation is 5.36 (all others below 3) and it has a Cook's D of 0.16. I run the regression twice: with and without this particular observation. It turns out that, if removed, the coefficients are getting larger in absolute values. The variables of interest (VC reputation and VC type) turned from weakly significant (at 10% level) into significant (at the 5% level). Running a robust regression, both the coefficients as well as the p-values are even more significant. However, the robust regression excludes 4 observations. Hence, should I simply stick with OLS and remove this potential outlier (and mention that I did so)? Or would it be better to report both results (with and without the observation)? 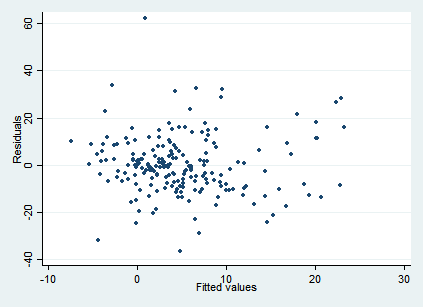 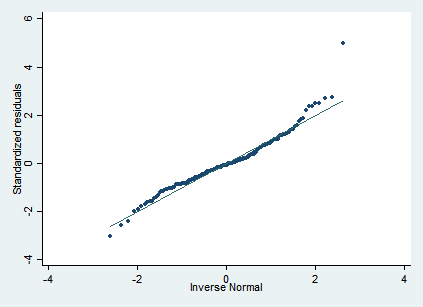 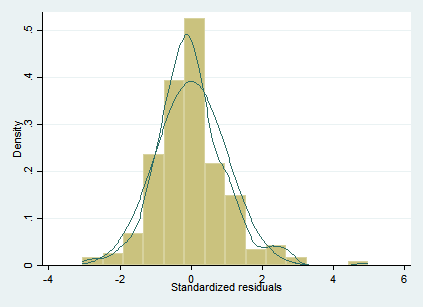 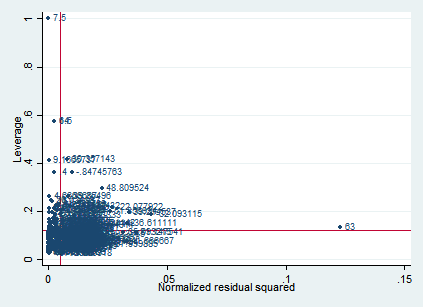 You have a large sample size and there is only this one value that seems to be an issue, while the rest seems very close to a normal distribution. Do you have any reason to exclude this point (bad measure? possible typing error?)? Excluding points is usually a bad solution when they are measures similar to the others that were not due to obvious experimental mistakes, but removing it and comparing the regression with and without it can give you useful information on the importance of this outlier on your conclusions. See Whether to delete cases that are flagged as outliers by statistical software when performing multiple regression? and http://www.rapidinsightinc.com/handle-outliers/

If you get different conclusions when removing this point, then you may have a problem and you may need to use a robust regression.

This issue is very similar to the one reported here: What to do if residuals are not normally distributed?

Not the answer you're looking for? Browse other questions tagged regression residuals outliers normality-assumption heavy-tailed or ask your own question.

23
Whether to delete cases that are flagged as outliers by statistical software when performing multiple regression?
5
What to do if residuals are not normally distributed?