In seq2seq, how is the attention vector combined with the hidden state of the decoder?

My understanding of attention is that a weighted combination of a set of vectors is somehow combined with the decoder's hidden state. How exactly is it combined? Is it added to the hidden state before it enters the cell at each time step?

Let me start with describing the general attention mechanism, because it seems important:

This means the both vectors are stacked and go through one more linear layer with $tanh$ non-linearity. Stacking seems reasonable, because in general $h_t$ and $\bar{h}_s$ (and thus $c_t$) can have different dimensions, so you can't add them easily.

All of this can be summarized in one picture: 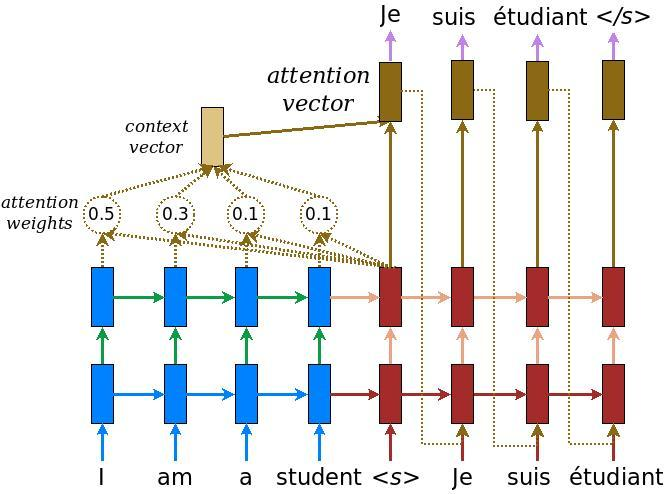 Not the answer you're looking for? Browse other questions tagged deep-learning tensorflow lstm rnn seq2seq or ask your own question.

8
What happens when we feed a 2D matrix to a LSTM layer
11
What is the intuition behind a Long Short Term Memory (LSTM) recurrent neural network?
3
Previous and next hidden state in LSTM
0
Need help understanding LSTM graph from Neural Architecture Search
3
Time steps in Keras LSTM
2
What happens to the initial hidden state in an RNN layer?
2
How does an LSTM process sequences longer than its memory?
1
Is it true that Bahdanau's attention mechanism is not Global like Luong's?