Interpreting a three-way interaction in a multilevel growth model

I have the following multilevel (mixed effects) growth model:

I am looking for some guidance on how to interpret the cross-level interactions, particularly the $\beta_6(Time^2_{it}*GHP_{i})$ interaction (which, I know, is technically a three-level interaction, i.e. time x time x general health problems).

First, it is important to know what the direction of the fixed effects of linear time, quadratic time, and general health problems were on the outcome (all eefects were significant at $a$ = .05).

b) $\beta_2Time^2_{it}$ = .27, hence depression scores show a (weak) convex curve, or the rate at which they decline decreases over time. This looks something like: 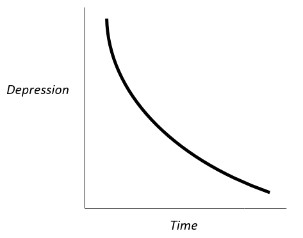 d) $\beta_5(Time_{it}*GHQ_i)$ = 1, so the negative linear slope of time on depression scores was more positive, or flatter, at higher levels of general health problems.

This might look like the solid red line in the image below (the dotted red lines are meant to signify the relationship, i.e. the stronger the three-level interaction, the more negative and hence concave the convex slope becomes ): 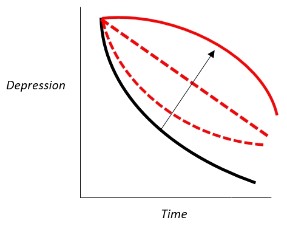 But I would appreciate your thoughts.

The answer is simple: one can only really know the direction of effects by plotting them.

Here is a plot of the interaction effect: 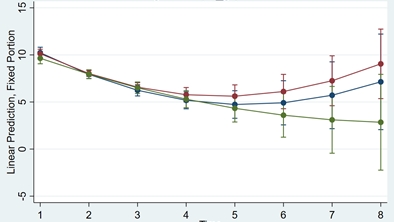 The green line (the one which is most linear) captures the negative effect on the quadratic interaction term I predicted in the figure above. So my interpretation was correct. But the plots provide the context needed to interpret the coefficients properly. For instance, whilst the coefficient tells you the general direction, unless you have an eye for these things (which I'm sure most of you do), it's hard to gauge the strength/steepness of the slope, which has important implications for its interpretation.

Not the answer you're looking for? Browse other questions tagged time-series mixed-model interaction interpretation multilevel-analysis or ask your own question.