Performing multiple linear regressions, in Excel, that have a common x-intercept?

I was plotting some linear data sets in Excel, including linear trend-lines: 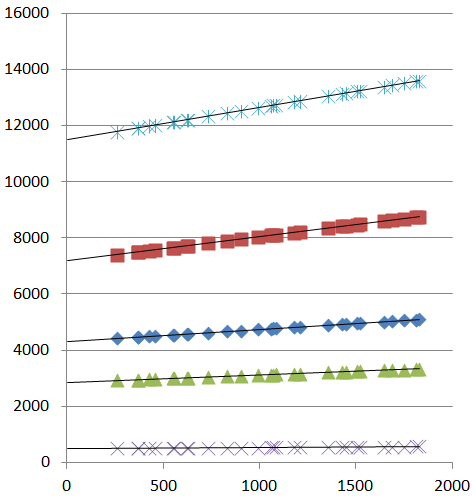 I was about to perform 5 separate linear regressions, so I could get the slope and y-intercept of each "independent" data set. But then, in a flash, I realized that data might have a common point:

In fact, it might even be: the x-intercept itself.

So what I need now is way to run multiple simultaneous linear regressions, with the assumption that all of the lines intersect at a common point.

Does such a linear regression analysis method exist? Does it have a name? Does it exist in Excel?

The best I've been able to muster so far is to run five independent linear regressions, getting the slope and intercept of each data set:

Plotting slope against y-intercept you see some kind of correlation: 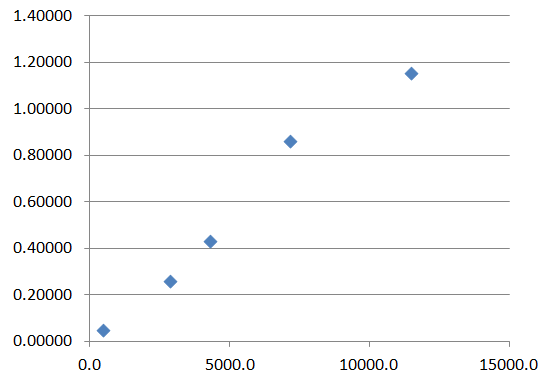 If I assume that my data sets share an x-intercept, then I can find that x-value through:

Which, aside from one really wonky point, converges pretty well.

There are several straightforward ways to do this in Excel.

The fiddly part involves setting up the data in the right way. We can figure this out by means of a mathematical expression for the implicit model. There are five groups of data: let's index them by $k$ ranging from $1$ to $5$ (from bottom to top in the plot). Each data point can then be identified by means of a second index $j$ as the ordered pair $x_{kj}, y_{kj}$. (It appears that $x_{kj} = x_{k'j}$ for any two indexes $k$ and $k'$, but this is not essential.) In these terms the model supposes there are five slopes $\beta_k$ and an x-intercept $\alpha$; that is, $y_{kj}$ should be closely approximated by $\beta_k (x_{kj}-\alpha)$. The combined LINEST/Solver solution minimizes the sum of squares of the discrepancies. Alternatively--this will come in handy for assessing confidence intervals--we can view the $y_{kj}$ as independent draws from normal distributions having a common unknown variance $\sigma^2$ and means $\beta_k(x_{kj}-\alpha)$.

This formulation, with five different coefficients and the proposed use of LINEST, suggests we should set up the data in an array where there is a separate column for each $k$ and these are immediately followed by a column for the $y_{kj}$.

I worked up an example using simulated data akin to those shown in the question. Here is what the data array looks like:

Here, Alpha is a named cell containing the intercept (currently set to -7000). This formula, when pasted down the full extent of the columns headed "1" through "5", puts a zero in each cell except when the value of $k$ (shown in the leftmost column) corresponds to the column heading, where it puts the difference $x_{kj}-\alpha$. This is what is needed to perform multiple linear regression with LINEST. The expression looks like

Range I2:I126 is the column of y-values; range D2:H126 comprises the five computed columns; FALSE stipulates that the y-intercept is forced to $0$; and TRUE asks for extended statistics. The formula's output occupies a range of 6 rows by 5 columns, of which the first three rows might look like

Notice, in particular, the 51.199 in row 3, column 2 of the LINEST output: this is the mean sum of squares of residuals. That's what we would like to minimize. In my spreadsheet this value sits at cell U9. In eyeballing the plots, I figured the x-intercept was surely between $-20000$ and $0$. Here's the corresponding Solver dialog to minimize U9 by varying $\alpha$, named XIntercept in this sheet: 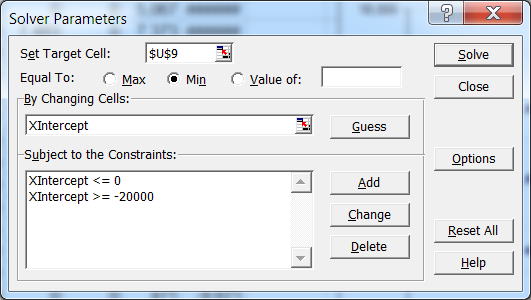 It returned a reasonable result almost instantly. To see how it can perform, compare the parameters as set in the simulation against the estimates obtained in this fashion:

Using these parameters, the fit is excellent: 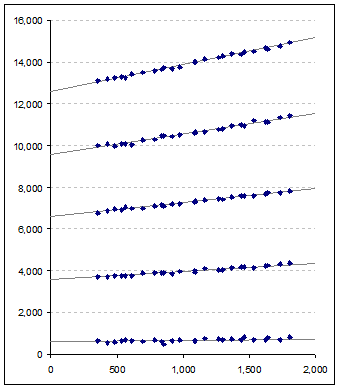 One can go further by computing the fit and using that to calculate the log likelihood. Solver can modify a set of parameters (initalized to the LINEST estimates) one parameter at time to attain any desired value of the log likelihood less than the maximum value. In the usual way--by reducing the log likelihood by a quantile of a $\chi^2$ distribution--you can obtain confidence intervals for each parameter. In fact, if you want--this is an excellent way to learn how the maximum likelihood machinery works--you can skip the LINEST approach altogether and use Solver to maximize the log likelihood. However, using Solver in this "naked" way--without knowing in advance approximately what the parameter estimates should be--is risky. Solver will readily stop at a (poor) local maximum. The combination of an initial estimate, such as that afforded by guessing at $\alpha$ and applying LINEST, along with a quick application of Solver to polish these results, is much more reliable and tends to work well.

It is very unlikely that Excel would be able to do this easily or reliably (you should really not use Excel for any but the simplest stats, and sometimes not even then).

If you know (or think you know) what the common x intercept is (not just estimate it from the data) then you can subtract that value from all the x variables and do a regression without intercept (because the line should go through 0,0 now). You can compare that model to the model with each line having its own intercept (if they all go through the same fixed intercept then all the fitted intercepts should simultaneously be not significantly different from 0.

A quick way to get a feel for if your x intercepts are likely to be the same would be to reverse your x and y variables and fit the lines, this means that now the y-intercepts would be the same which is easier to test. However this also changes the direction of the error and so answers a bit of a different question and should probably be followed up by something more formal.

You could create bootstrap estimates of the x intercept (computed as -b/m) and use that to estimate if the intercepts differ.

You could fit a nonlinear least squares model to estimate the model with a common x-intercept and compare it with a model where each gets its own intercept to see if they are significantly different (the model would be of the form slope*(x-x0) with slope and x0 as the parameters (x0 being the x-intercept).

You could fit the similar model using Bayesian techniques as well to compare.

Any of these would be doable in R or other statistical packages.

I'm only a chemist not a statistician but the easiest way I know is to use dummy variables. i.e. for each (n-1)slope assign a 1 in the z column and multiply x*z. This means one slope will have 0 in all z's. For a common intercept with 3 slopes it would look like this.

Then use the Excel regression add in. SUMMARY OUTPUT

The ANOVA is rubbish but the output will give you all the equations for each of the lines.e.g.

Not the answer you're looking for? Browse other questions tagged regression multiple-regression excel or ask your own question.