I have come across a picture of a density plot that I understand visually and conceptually but I am confused by the terminology. It is referred to as simply a "Density Plot". Have a look: 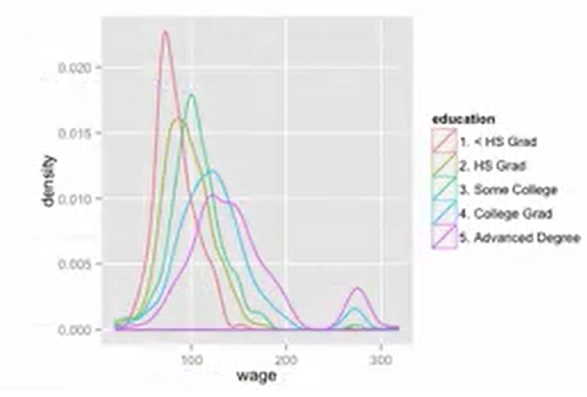 Question: If a researcher refers to a graph as a density plot, what does he/she probably mean?

Unfortunately I couldn't find the URL to accompany the picture, so we won't be able to examine everything under the hood. However, I'm hoping someone can tell what it most likely is just by glancing at it, or at least weigh in on what the conventional understanding of "Density Plot" implies.

Since there are so many out there, I'm wondering if we wouldn't have to specify which type of density is being plotted? Or is one type much more common than the other types, to the effect that "Density Plot" is assumed to mean that type and not any other type unless otherwise stated?

"Density", or the probability density function, is a basic concept that is above the specific estimation of a density curve. A more comprehensive reference can be found in many textbooks or even here https://en.wikipedia.org/wiki/Probability_density_function. Roughly, the density plots above appear to reflect an empiricial estimation of the relative likelihood that a given sample has the specified value on the x-axis.

Once you understand this, then there are a variety of methods to estimate the density for a random variable given the limited sample you have, as you already have listed some in your post.

Not the answer you're looking for? Browse other questions tagged distributions data-visualization terminology density-estimation or ask your own question.

14
How to scale violin plots for comparisons?
5
What is the proper naming scheme for dataset parts?
2
Smoothing Kernel Preventing Simulation of Semi-Circle Law of Random Matrices
3
naming convention: what does GLM stand for?
10
What's a good way of graphically representing a very large number of paired datapoints?
0
Data naming convention in machine learning and cross-validation?
1
Convention to denote CDF of “named” distribution
2
Naming of mathematical elements in GMM?
0
Kernel density estimation - different choice of kernel