I've done some experiments to understand the influence of the dimension of the latent space in a VAE, and it seems that the higher the space, the harder it is to generate realistic images. I might have an intuition of the reason, and I wanted to have your opinion or any other theoretical insight about it.

What I conclude is that:

So here is a visualization of what would happen with a high-dimensional latent space: 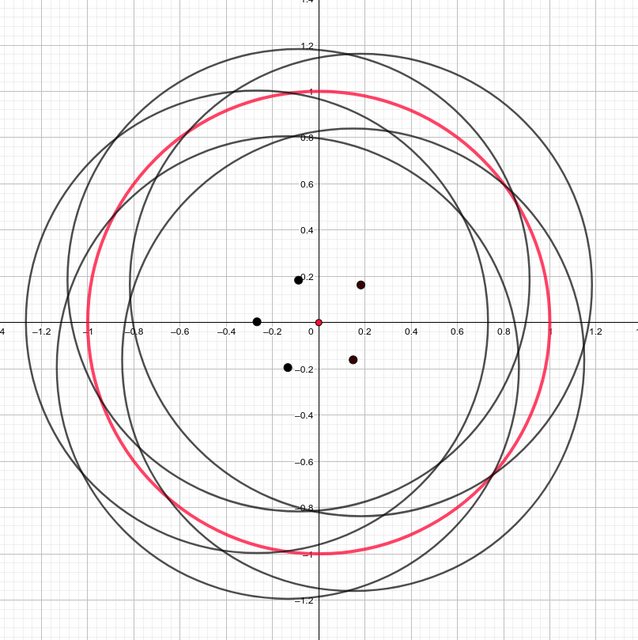 The red bubble would be the practical support of $\mathcal{N}(0,I)$ while the union of the black bubbles would be the practical support of $\mathcal{D}$. Only the black bubbles contain realistic images, while the red bubble contains almost no realistic image. The higher the dimension, the thinner the bubbles are and the smaller the overlapping space is.

Is this intuition correct? Is there any other reason for high dimensional latent spaces not to work correctly?

You seem to have misunderstood your architecture and are, quite simply, overfitting your data.

It looks like your interpretation of the latent space is that it represents a manifold of realistic-looking images. That is unlikely in the best case, and if your decoder performs any transformation (except perhaps an affine transformation) on the sampling outputs - impossible.

Autoencoders (or rather the encoder component of them) in general are compression algorithms. This means that they approximate 'real' data with a smaller set of more abstract features.

What happened was we've introduced an abstract, higher-dimensional feature - 'number of repetitions' - that helps us express the original data more tersely. You could compress the output further; for example, noticing that even positions are just separators, you could encode them as a single-bit padding rather than an ASCII code.

Autoencoders do exactly that, except they get to pick the features themselves, and variational autoencoders enforce that the final level of coding (at least) is fuzzy in a way that can be manipulated.

So what you do in your model is that you're describing your input image using over sixty-five thousand features. And in a variational autoencoder, each feature is actually a sliding scale between two distinct versions of a feature, e.g. male/female for faces, or wide/thin brushstroke for MNIST digits.

Can you think of just a hundred ways to describe the differences between two realistic pictures in a meaningful way? Possible, I suppose, but they'll get increasingly forced as you try to go on.

With so much room to spare, the optimizer can comfortably encode each distinct training image's features in a non-overlapping slice of the latent space rather than learning the features of the training data taken globally.

So, when you feed it a validation picture, its encoding lands somewhere between islands of locally applicable feature encodings and so the result is entirely incoherent.

Not the answer you're looking for? Browse other questions tagged machine-learning neural-networks normal-distribution autoencoders generative-models or ask your own question.