How to do preprocessing for zero inflated variable in multiple regression?

I am trying to build a multiple regression model, and many of my variables looks like this (histogram for time spent in the system). 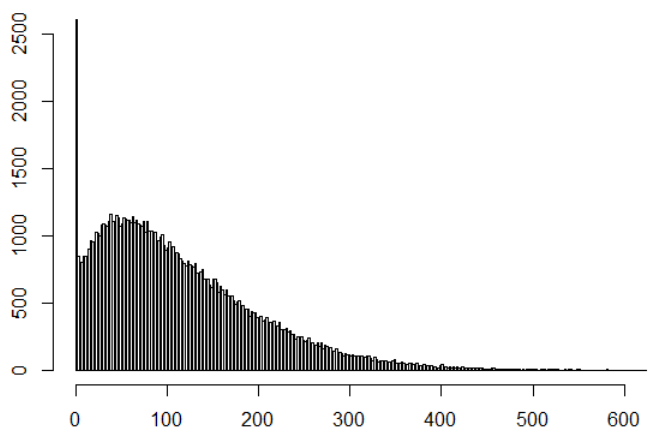 The reason I had such data is because zero is actually represents another business case: customer created the account but never used it.

How should I user this types of the variables in a regression model? I have some ideas to do the preprocessing, are they valid? what else can we do?

To take these zeroes and convert them to the median would create a false sense of certainty that would bias your results. I would assume that if these customers had nonzero values, the values would take on a range. That's one reason why multiple imputation has become so popular: it preserves some uncertainty, variability, in the imputed values while using all available information to assign them as plausibly as possible. So rather than proceeding as you suggest, I would use multiple imputation as one approach.

A second approach would be censored regression, as described in the growing number of threads that you can find via a Google search or a search on this site. I found this page helpful. (Though it may be less helpful if all your zero-inflated variables are predictors.)

In either case I like your idea of including a binary column to indicate zero/nonzero.

Not the answer you're looking for? Browse other questions tagged multiple-regression data-transformation zero-inflation or ask your own question.