Is there a specific name for this plot? 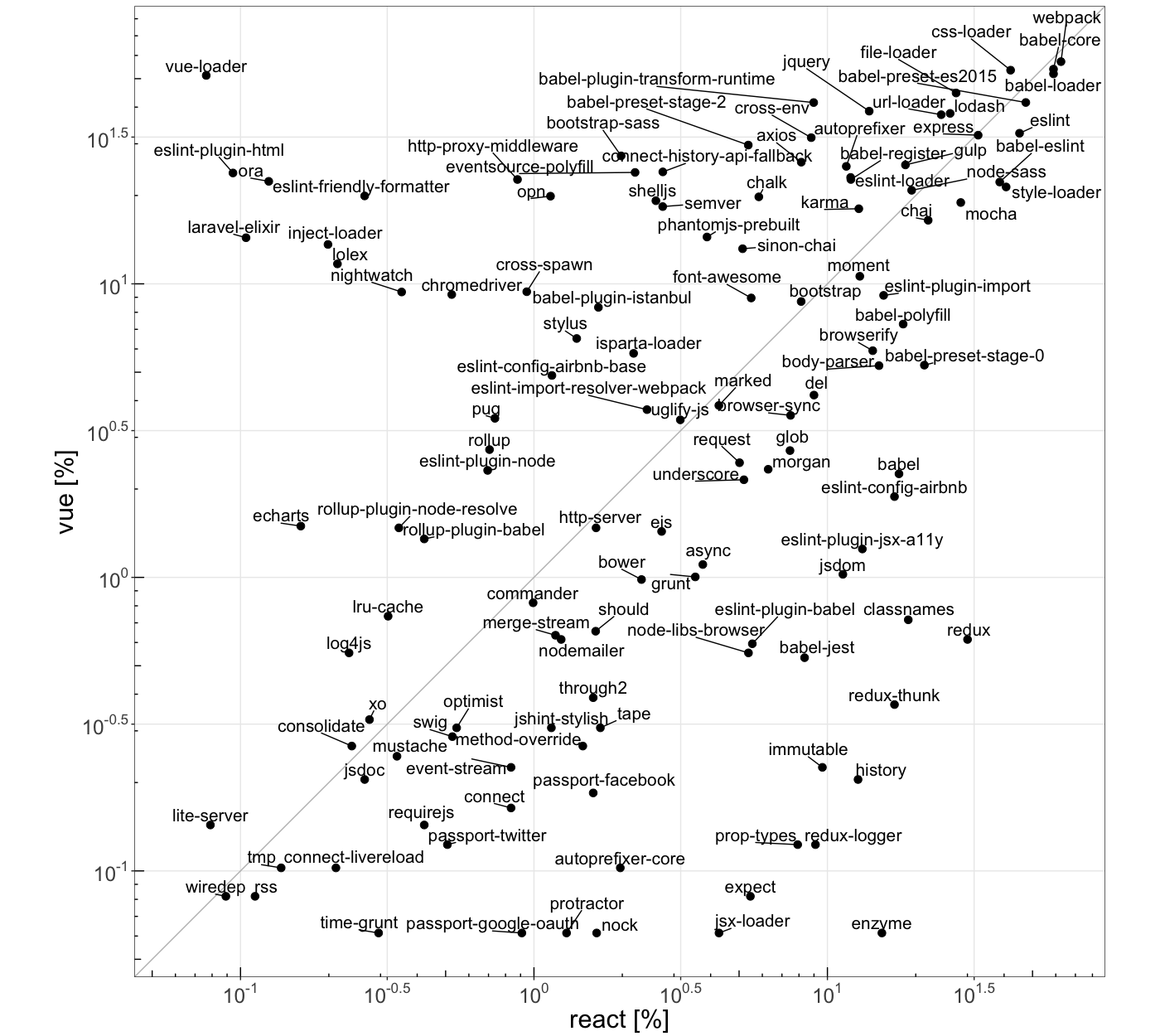 This plot represents the popularity of technologies in two "tools", vue and react. In left-top corner are specific technologies for vue but not for react, right-top technologies popular in both tools - you get the idea.

Is there any specific name for this kind of data representation?

I'm asking about this because I want to find some guides explaining how to read this kind of plots.

This plot is quite similar to Correspondence Analysis but axis are made of two variables from my data:

This kind of plot can be explained by converting 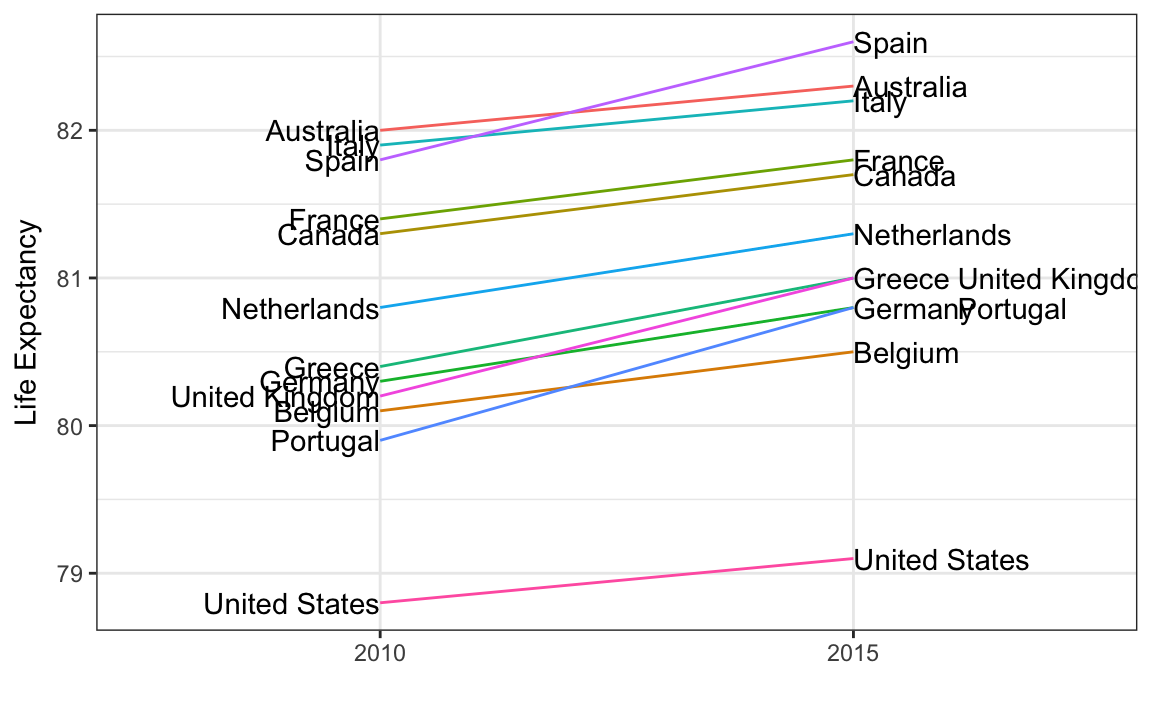 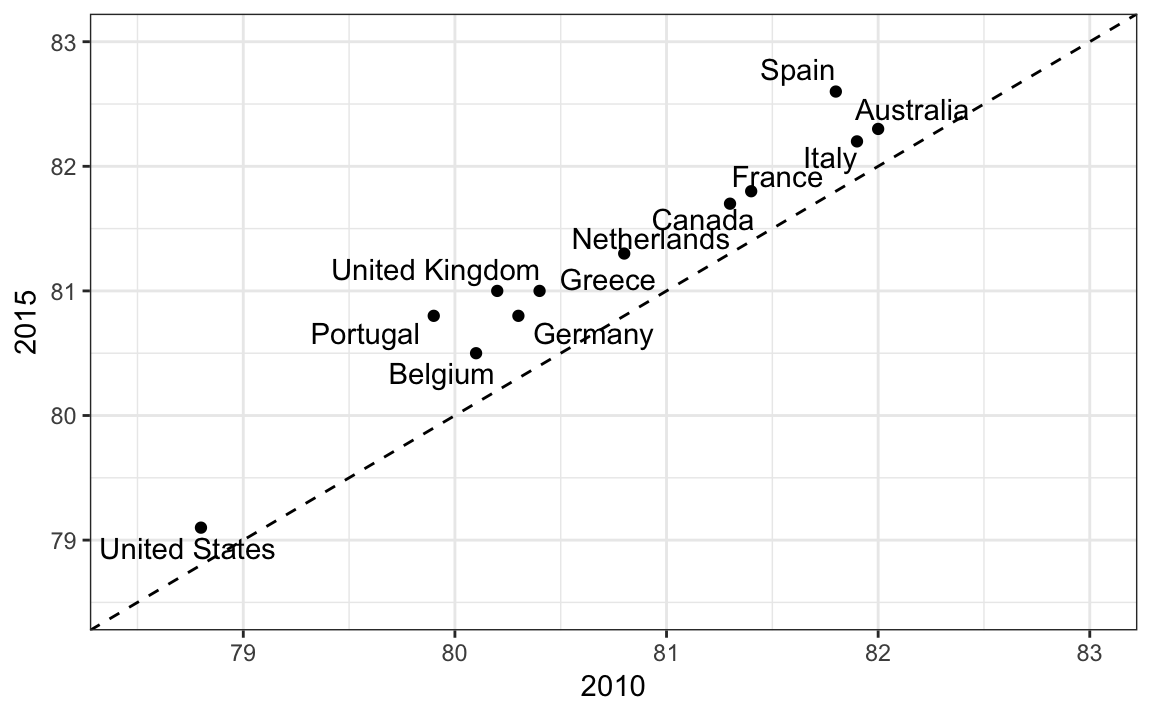 Since I will not find any ready to use guides how to read this kind of plot I made my own explanation: 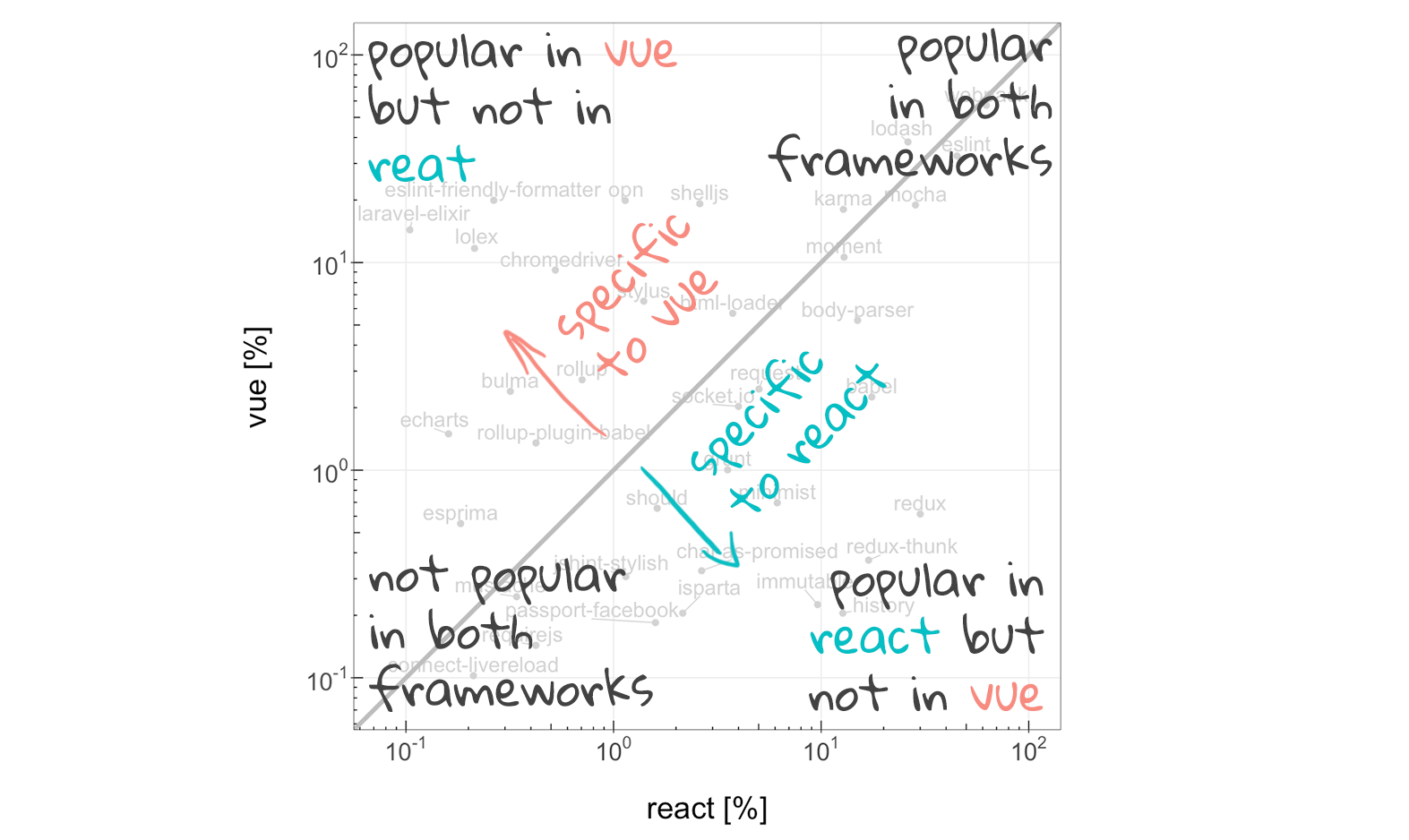 I do see a couple features here that are somewhat different from the way scatterplots are most commonly used. First, in scientific contexts, scatterplots are typically used to help us think about relationships between two variables. In your case, you seem to be more interested in thinking about the individual observations and how they rank (in a multidimensional sense) relative to each other and the joint distribution. Hence, you have your points prominently labeled. That is, given a default data matrix with variables in columns and observations in rows, usually a scatterplot is made to help you think about the columns; here you seem to be making the plot to help you think about the rows.

Second, there is a subtle distinction in statistics between correlation and agreement (cf., Does Spearman's $r=0.38$ indicate agreement?). Most commonly people look at scatterplots from a correlation-ish frame of mind; your scatterplot seems to connote an agreement-ish perspective. For example, your two variables are naturally on the same scale and you have a prominent diagonal line marking perfect agreement. Your "slope plot", which you think of as analogous, is also presenting a kind of agreement-ish information (i.e., the stability of the rankings over time, coupled with the consistency of the increase).

Under the assumption that this is what you hope to glean from your visualization, the current plot is not optimal. It is harder by nature to compare positions to a diagonal—the human visual system just isn't designed for that. Instead, it would be better to 'turn' the plot so that points can be compared to a horizontal line (and also possibly their right to left horizontal position). That is what Nolan did in another plot you find similar. This line of reasoning leads us to a different plot, which, while also a type of scatterplot, does have a special name, viz., a Bland-Altman plot (also called 'Tukey's mean-difference plot'; see Wikipedia and Creating and interpreting Bland-Altman plot). You can still label your points in a BA plot. In that version of your plot, the vertical position tells you if its use is dominated by vue (above the midline) or react (below). The left to right position will provide a sense of how commonly that technology is used overall. Furthermore, if you wondered about the explicit agreement attributes of vue and react as variables (e.g., is there a bias towards one or the other), those could be incorporated naturally.

Not the answer you're looking for? Browse other questions tagged correlation data-visualization scatterplot correspondence-analysis agreement-statistics or ask your own question.