I know that with some classification algorithms, you can get higher accuracy if you use weak learners and have them vote. So if each weak learner has 55% accuracy, I can have all of them tell me the class they predict and take the more common class (in the case of binary classification). I'm trying to understand the math behind this.

1) How would I calculate my maximum classification accuracy if X_1 and X_2 are independent?

and take the more common class (in the case of binary classification). ... Suppose I have two random variables

It's unclear what a majority vote for two classifiers means, exactly (what if one indicates 1 and the other 0?) Furthermore, your 2) can be constructed in several ways, showing that your 1) is not well defined. 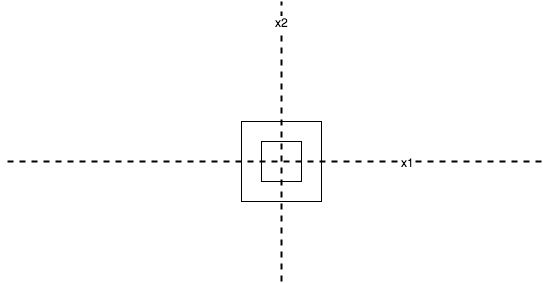 To understand how weak classifiers interact it is important to understand what the numbers mean. The discussion is based on idealised situations, in real life there are confidence intervals associated with sampling. When I refer to probabilities I mean the true underlying probability, not an experimentally measured one.

So at P=0.55 there still 90% random variation unaccounted for by your model. Independent variations combine as the square root of the sum of squares (which is why mathematicians tend to work with variances which make this easier), so at 0.55 there is plenty of random variation to allow the two to have no interaction, therefore it is possible that both have p=0.55 and be independent as only 10% of the correct answers are due to the underlying model and these could be a different 10% in X1 and X2.

For two classifiers at P = 0.75 independence is guaranteed to break down. Here the model being appropriate accounts for exactly half the outcomes. Either they start to overlap or they will be mutually exclusive. Either way a correlation is unavoidable.

In between the probability of independence declines continuously as P increases. At P = 0.625 25% of the prediction is due to the underlying model, so while it is still possible for the two models to pick from different 25% of the dataset it is less likely than from different 10%s.

1) depends on how you decide ties. With 2 classifiers you will get draws each time.

2) basically the above is a long wind way of saying that it is possible both are independent and have a slight positive performance. But this can't be stretched too far.

Not the answer you're looking for? Browse other questions tagged probability classification or ask your own question.