What has to be true of controls (main effects and interactions) for them to be included in experimental analysis?

where $T$ is a binary randomized treatment indicator, and x is a covariate (say pre-experimental outcomes, or fixed characteristics of the units). The motivation for adding $x$ is

Is there a readable survey that I can refer to that explains what must be true of $x$ for my estimates of $\beta$ and $\delta$ to be valid and when this can do wrong? For example, $x$ can't be an intermediate outcome or a pre-treatment variable that is altered by expectation of being treated in the future. Variables are that directly influence the outcome $y$ but are unrelated to treatment $T$ are OK to include. Variables that influence both $T$ and $y$ need to be included.

They have to be be predetermined -- otherwise they would constitute a "bad control." A good blog post about the topic is here, and if my memory serves there's a section on the topic in "Mostly Harmless Econometrics."

Basically if $T$ causes $x$, and $x$ causes $y$, then the coefficient on $T$ will be biased because part of its effect is being sopped up through $x$.

I think that, in the language of formal causal reasoning, conditioning your model of $y$ on $x$ introduces bias in estimating the true causal effect of $T$ on $y$ if $x$ is a causal collider with respect to $T$ as a prior cause, and any unmeasured prior cause of both $x$ and $y$ (for any of the four combinations of the red arrows existing or not existing).

In the DAG below, $\boxed{R}$ is the randomizing process for $T$, $x$ is caused by $T$, and an unmeasured variable $U$ causes both $x$ and $y$. The red arrows indicate that these two direct causal effects of $T$ and $x$ on $y$ may, or may not exists. In any case, because $x$ is a causal "collider" in the sense described by Hernán and Robbins (and Pearl, and Greenland, and others :), conditioning your model of $y$ on $x$ will create biased estimates of the true causal effect of $T$ on $y$.

In the simplest case, where the red arrows do not exist, the true causal effect of $T$ on $y$ is zero, but conditioning on $x$ will induce an association between $T$ and $y$ (that is, you will have $\beta\ne0$), because you have "unblocked" association at the collider $x$, so association "flows" from $y \rightarrow U \rightarrow x \rightarrow T$ (see Hernán and Robbin's example and discussion on page 87). 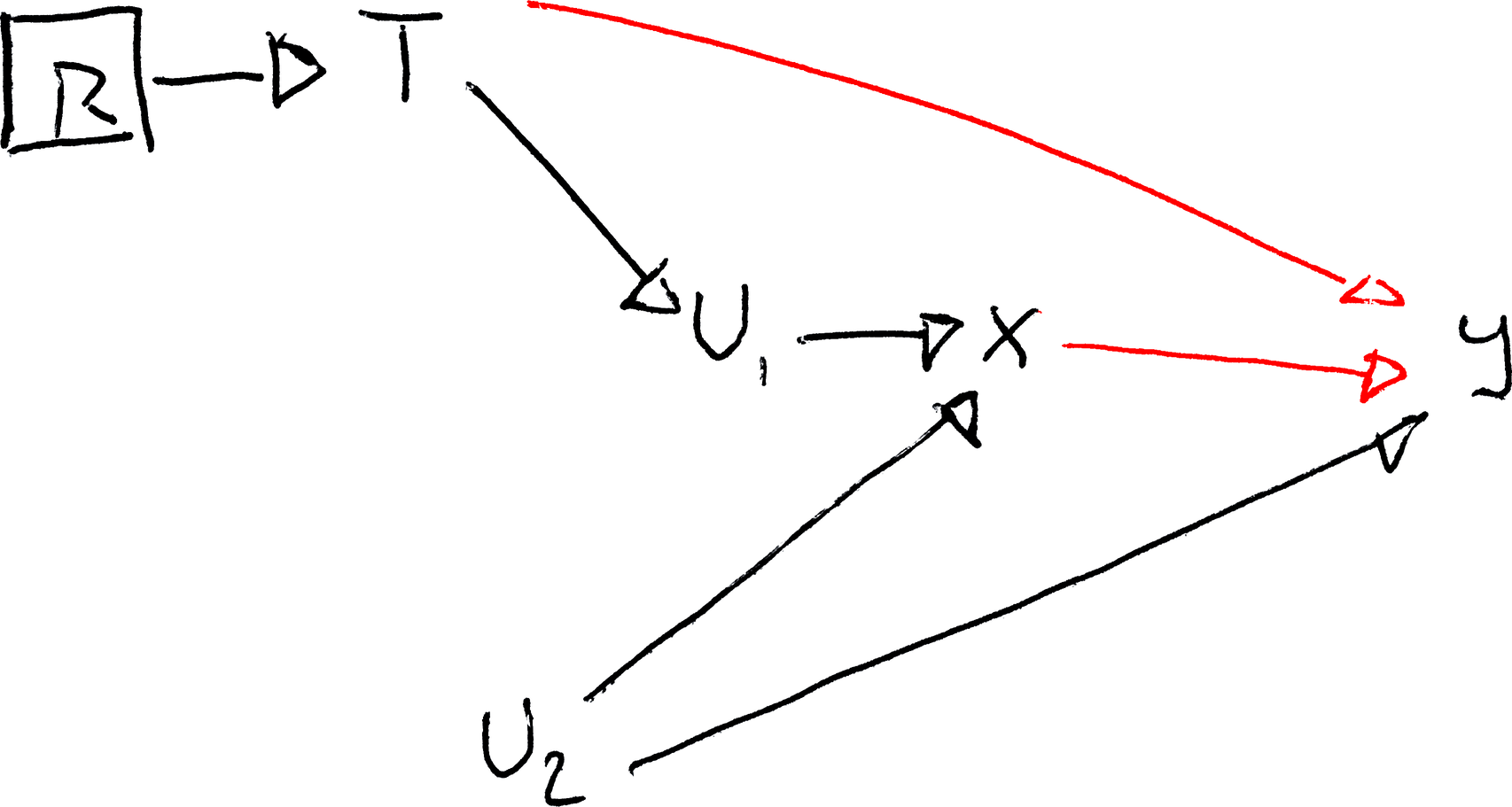 It could also be the case that $x$ is not a causal collider, but that one of it's descendants is, as with unmeasured variable $U_{2}$—which also may or may not be a direct cause of $y$—here, where association "flows" from $y \rightarrow U_{1} \rightarrow U_{2} \rightarrow x \rightarrow T$: 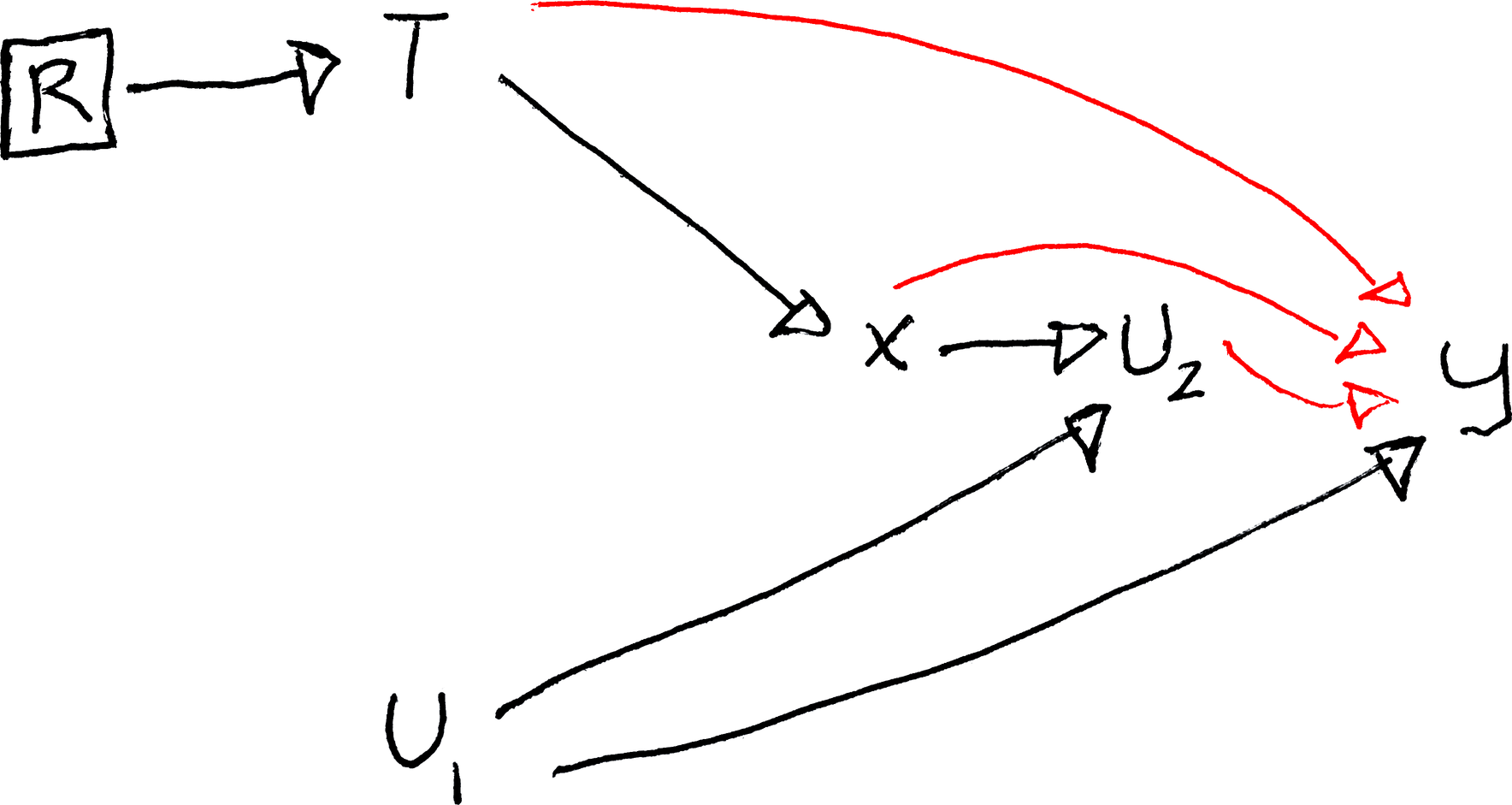 Not the answer you're looking for? Browse other questions tagged regression references random-allocation or ask your own question.

3
multiplicative treatment effects with standard errors
6
When is there a point for using regression with controls to analyze experimental data?
1
Randomized Intervention and endogeneity across outcomes
1
treatment effect in instrumental variables regression
1
Bias in average treatment effect with least-squares when continous interaction terms
3
Not including main effect term in subgroup analysis?