Which independent variables are most important in predicting the response variable? [duplicate]

I'm a biologist, and I have a large dataset that I'm trying to analyze. Here are the variables I'm working with:

I am trying to figure out which variable(s) are the most important in predicting the performance of a blood sample in the test.

I would like to make these data more manageable by doing a PCA, but I'm new to this sort of analysis. I understand that a PCA will create groups of principal components (it will group metabolites that covary with each other and label each of these groups a principal component), but I'm not sure how to take into account the response variable in this analysis.

Any help would be much appreciated!!! Thank you.

Now we come to your question. The way we bring in a response variable is to look at the relationship- for example, a correlation or linear regression- between each principal component (each eigenmetabolite) and the response variable. Here is a neat little example in R code. (Note that I use the svd function rather than the pls package, as you might be using).

What I did is create a matrix of simulated metabolite data with 50 genes that are somewhat correlated with the response variable, and 110 genes that aren't. We can see that only one PC is significant, and it explains ~33% of the variance: 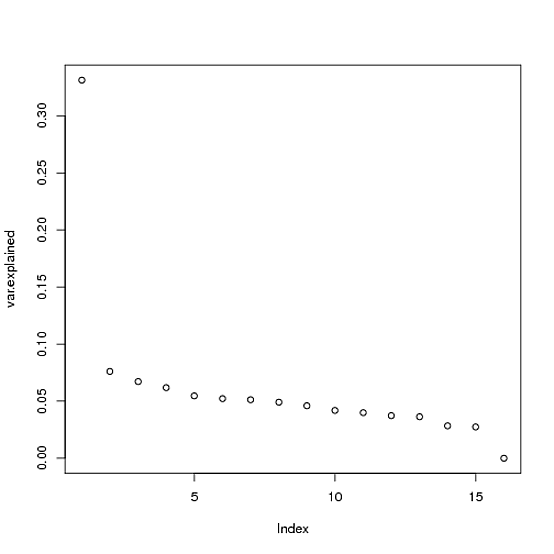 Now let's compare that PC to the response variable: 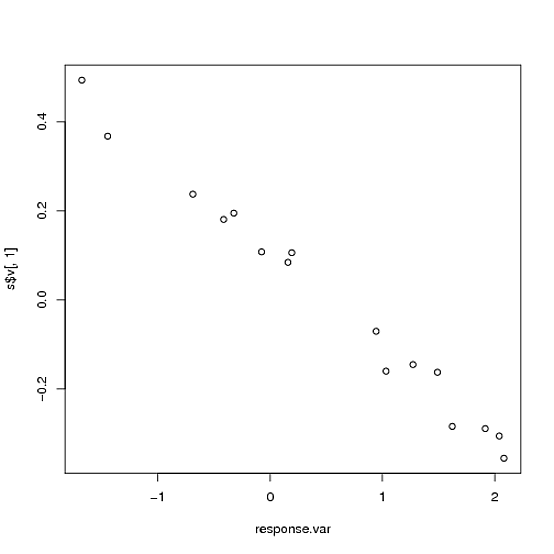 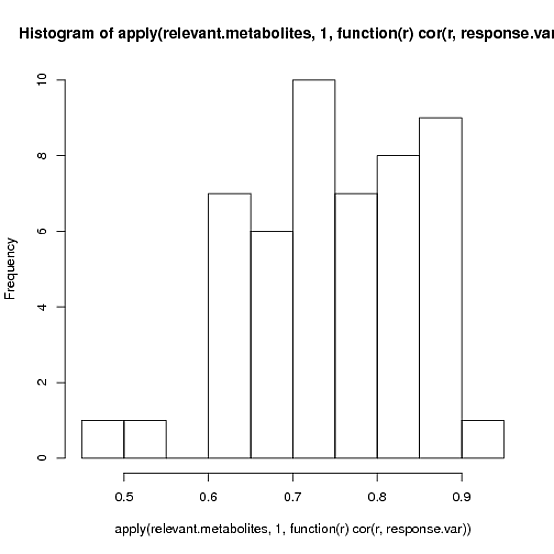 Of course, that's exactly why we're applying PCA in the first place. While the relationship between the response variable and any individual metabolite may be too weak to measure over the rest of the noise, when you combine many genes together you might find that a principal component captures that response well!

After the great discussion, above, I'm hesitant to add another idea, but it seems to me that partial least squares may do what you want, more easily. I usually do this in SAS, so I don't know the details of doing it in R, but there is a PLS package that does both partial least squares regression and principal component regression.

Not the answer you're looking for? Browse other questions tagged r regression pca or ask your own question.

31
Detecting significant predictors out of many independent variables
1
Visualizing large dataset with multiple subgroups
1
Basic question on PCA: can it be used to divide original features into groups?
0
Can PCA scores be used as dependent variable?
0
Feature selection for unknown parametric model

3
Interpretation of PCA biplot?
1
Does using a covariance matrix of scaled and centered variables compare with using a correlation matrix?
0
Is it advisable to provide only variables highly correlated with response to perform principal components regression?