How would you create a process (Gaussian, Dirichlet)

Maybe this is not an appropriate question to ask here, but for certain types of what I'll call "statistical objects" that are related to distributions and are built upon them you have some steps to follow to create that statistical object. For example, if I wanted to create a mixture of 3 Gaussians a "mixture model", I would define my 3 Gaussians with there receptive parameters and sample some N values from each according to some probabilties.

In the sequel I will only talk about Gaussian processes. Let us begin by 'creating' some examples by hand and sampling elements from them.

All we need to know for the 'by hand' part is the following theorem: We let $N(\mu, \Sigma)$ denote the multivariate normal distribution and write $X \sim N(\mu, \Sigma)$ for the fact that a random variable $X$ has such a distribution. Notice that is to be read in the 'general' way as in https://en.wikipedia.org/wiki/Multivariate_normal_distribution, i.e. random variables might be just simple point loadings (if $\Sigma = 0$). 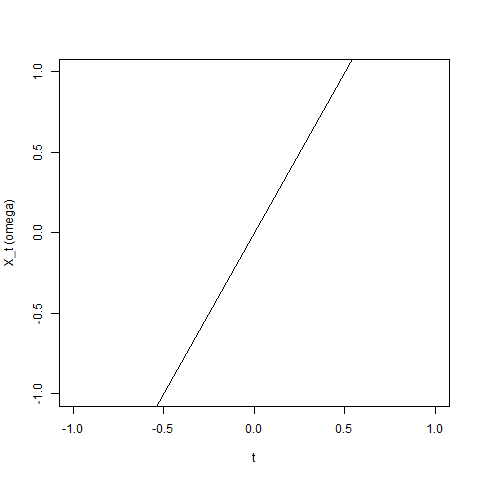 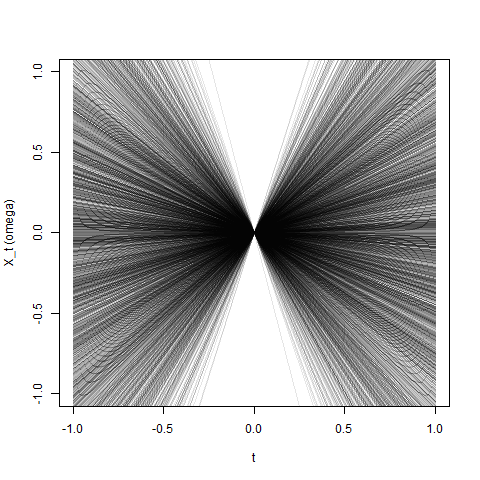 Aha... every sampled 'member' of this Gaussian Process is a line and by sampling a single value $y$ we actually sample their slope and since this is $N(0,1)$, the slopes 'gather around' $\mu=0$ and lie mostly in $[-1,1]$. That is why this process is called Gaussian Lines.

Exercise: Compute the covariance and mean functions of the Gaussian Lines and planes. 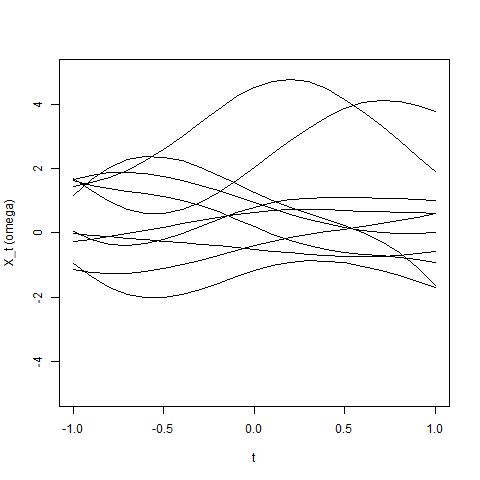 In that sense, every member is a wiggly (but at least continuous) function on $\mathbb{R}$.

Now for the theoretical part: Let us take $T=\mathbb{R}$ again although the whole thing can be extended. First of all we need to see that a Process is more than just its marginal descriptions. What people sometimes write is 'A Gaussian process is uniquely determined by its mean and covariance function'. What do people mean by that? If we are given two Gaussian Processes $(X_t)$ and $(Y_t)$ and they have the same mean and covariance functions then ... they are the same simply because people seem to 'define' a process solely in terms of the mean and kernel functions. But that is not the whole truth! A Gaussian Process actually is the following thing:

Now on the other direction: How to construct the whole process though? Let us assume that we are generally given not mean and kernel functions but rather a collection of prpbability measures, i.e. for every finite sequence $t_1, ..., t_n$ in $\mathbb{R}$ we are given a probability measure $P_{t_1, ..., t_n}$ on $\mathbb{R}^n$. Assume that

(i.e. two consistency assumptions meaning that the marginal probability measures do not contradict themselves in the thing they want the process to do) then we can always construct a process with that single complicated probability measure that satisfies

(see https://fabricebaudoin.wordpress.com/2012/03/25/lecture-5-the-daniell-kolmogorov-existence-theorem/ or any notes on the so-called Daniell-Kolmogorov existence theorem).

Not the answer you're looking for? Browse other questions tagged distributions stochastic-processes or ask your own question.

4
Combining Probability Density Functions
1
Degrees of freedom for Gaussian Process
2
Why the formula for AIC is the same for uni- and multivariate distributions/models?
2
What is the assumption on the distribution of data in gaussian mixture models?
2
Definition of the dirichlet process: what is the sequence of random variables
1
Definition of Gaussian process