How to statistically distinguish between two types of time series (bimodal vs. not bimodal)?

I have two different types of time series. The first group of series is much more bimodal, and the second group is much flatter. For a given time series, I want to test whether it more likely belongs with the first group or the second group. I don't really care about the specific values of the time series. It is the shape of the time series that matters and how much of a difference there is between the higher part of the series and the lower part of the series. Are there any specific tests for this? I think ARIMA modeling requires a stationary timeseries, which these are not. 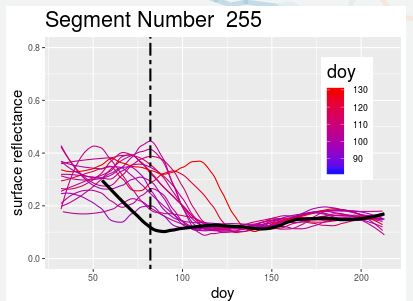 You can expand the time series on some functional basis. You can do this for example with the fda package in R. Now each time-series is represented as a vector of numbers. You could try a classification with these coefficient as input.

If its testing, and not classification that you want to do, then first you could model the coefficients of the more stable time-series with some random variable. And once you see a new time-series, you expand it out on the functional basis and check whether the coefficient values is something unlikely to be obtained. This will be multiple comparison.

If you don't want to do multiple comparison, you could do a PCA on the coefficients of the time-series from the class of less changing time-series. Just take the first principle component. Look at the distribution of the eigenvalue for this component. Try to model this with some suitable distribution. Then for a new time-series, expand to the coefficient vector, take an inner product of that with the first principal component vector. You will get a single number. Calculate how unlikely this number is under the distribution you used to model the eigenvalue. If it very unlikely, reject that it is from the class of less changing time-series.

Not the answer you're looking for? Browse other questions tagged time-series hypothesis-testing bimodal or ask your own question.

14
How can I group numerical data into naturally forming “brackets”? (e.g. income)