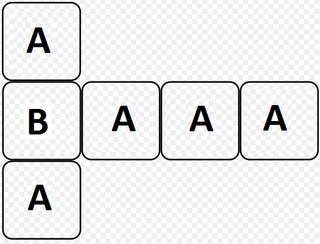 You select one of these dice in the black box. You aren't sure which one. You start rolling it and the output you see from the black box is either A or B. What is the minimum number of times would you need to roll the die to determine which which n-sided die you have?

My initial thoughts would be to track the probability of B coming up as you make more and more rolls and look at the coefficient of variation. Once the coefficient of variation had dropped below some threshold, the probability of rolling B would have stabilized. Then you relate that probability to the number of sides the die has (16.6% = 6 sided die). The number of rolls required to reach this stabilization would then be the minimum number of rolls.

Both of these approach I think would require multiple runs. You could have have a succession of B rolls (or a longer string of A rolls) that would then throw of the coefficient of variation / standard error and make it take longer to drop below whatever threshold you decide on.

Is there another / better way of approaching this? It seems to be similar to a coin toss problem, like how many tosses you would need to determine if a coin is fair or not, but I haven’t been able to follow / apply that to my problem when the 'true' probability is unknown (.e. not 50%).

Per the comments above, this appears unsolvable as-is without knowledge about the sizes of the dice (or at least some prior distribution on it).

However, your comment indicates that your actual problem is a different one, namely, how many trials of a binomial experiment with unknown $p$ you need to run to estimate $p$ with a prespecified precision. This is a question of a confidence interval for a binomial distribution, so our questions carrying both tags may be useful.

If you can bound $p$ away from 0 and 1, Confidence interval for Bernoulli sampling gives you a couple of ways to calculate CIs that you can backsolve for the number $n$ or trials. Conversely, Confidence interval around binomial estimate of 0 or 1 is helpful for the degenerate cases. It's the very small (but nonzero) and very large (but non-one) $p$s that will give you trouble, so once again, some prior information on $p$ may be indispensable.

Not the answer you're looking for? Browse other questions tagged probability mathematical-statistics normal-distribution sampling dice or ask your own question.

42
How often do you have to roll a 6-sided die to obtain every number at least once?
1
How many trials are needed to determine the probability of an outcome?
9
How many sides does a die have? Bayesian inference in JAGS
0
Rolling one die after another
5
Rolling a $6$ Sided Die
23
How many times must I roll a die to confidently assess its fairness?
2
How many rolls required for 90% chance to reach expected values of consecutive dice rolls in tabletop game?
4
How do you determine the probabilities of outcomes on a die?
3
How do I find the probability of getting specific, distinct, dice rolls on an unfair die in the same group of trials?